Over the last two days, Infinite released a comeback concept photo on its fanpage, along with individual teaser photos of the members and the MV teaser. Ever since their comeback was revealed to the fans back in February, Inspirits have been waiting in anticipation for more news and updates. However, other than posters and short TV advertisements with the words “Last Romeo”, there was no other information about this supposed April comeback.

Fortunately, things have picked up once again. To start off the Season 2 of their career with a bang, Infinite has announced a 1.2.3. showcase — 1 chance that won’t come again, 2nd-full length album Season 2, 3 days of showcases in three countries across Asia. They will be holding showcases on the 19th in Japan, 20th in Taiwan, and then 21st in Korea, coinciding with the official album release. 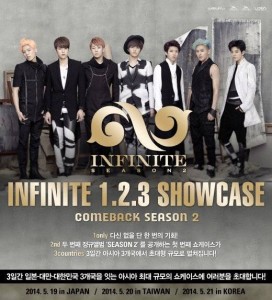 Unconfirmed rumours have it that the upcoming Infinite MV included the motif of waves, which is reflected in their new logo. To avoid any potential controversy regarding the Sewol ferry tragedy, Woollim decided to delay the comeback,possibly to re-film the MV. It does seem that Woollim has some fortune-telling abilities, especially since the same thing happened with “Destiny” and the Asiana Air crash incident.

“Last Romeo” is slated to be the title song, and the teaser puts it more along the softer lines of “Paradise, rather than the hard-hitting sounds of “Destiny” and “Chaser.” While I’m not a fan of the wild dyed hair on some members in the teaser photo, the teaser video looks much more promising with flattering styling.

Since this is Infinite’s first comeback since the merger with SM C&C, many people are waiting with bated breath to see what this new direction and season holds for the boys. Especially with a full-length album in the deal, the stakes are high and there is much to look out for.