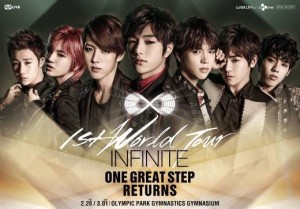 After wrapping up their One Great Step world tour with an estimated international audience of 150,000, Infinite staged their encore concert, One Great Step Returns, on February 28 – March 1. It was a glorious affair, with new stages and upgraded performances. But what set fans going crazy on the internet, were the exciting agendas that were announced.

First up, since this is Infinite’s first world tour, there has been a lot of interest from fans regarding their different experiences in each city. Thus, the footage from the various concert venues will be compiled and released as a movie. Infinite has previously released a movie showcasing their concert performances from their Second Invasion Evolution concert. However, this time round, it seems like the movie will focus more on behind-the-scenes footages instead of on-stage performances.

Soon after the Toheart sub-unit comprising of Key and Woo-hyun was announced last month, Infinite announced the formation of another sub-unit, Infinite F, during the concert. The members of the sub-unit comprise of the maknae line –Sung-jong, L and Sung-yeol. Initially named MyungWangSung (literally meaning Pluto) by combining their names, they (wisely) decided to switch to a simpler name. The ‘F’ in Infinite F supposedly stands for ‘Face’ and ‘Flower’, since the maknae line is also unofficially known as the visual line of Infinite.

Infinite F, unlike Infinite H, is unlikely to offer up any new flavour of Infinite. Considering that the three of them are not the most talented singers, I’m a little apprehensive about the formation of this unit. That said, I’m seeing this as an opportunity for the three of them to step up their game in terms of stage presence and vocals, gain some experience being in the limelight, and learn to sing more than two lines each. They might not be the strongest in the group, but they have worked hard and it has shown in their tremendous improvements. L is slated to be the main vocal, and I’m expecting their style to be similar to their image — fun, youthful and upbeat. It is uncertain if this unit will just be a feature in the group’s album or actually release their own album. In any case, fingers crossed that they will be able to hold their own and deliver above expectations. 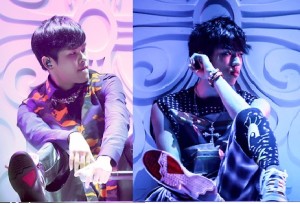 During the concert, Infinite also performed three unreleased songs that will likely be included in their upcoming albums. Infinite F showcased their debut song “My Heart is Beating”. It’s an upbeat and high-energy song, and while it’s different from Infinite’s usual intense style, it is still similar to some of Infinite’s brighter singles, such as “Man In Love” and “Nothing’s Over”.

Infinite H also performed “Alone”, a medium tempo rap ballad, whose lyrics were penned by the duo. Infinite H’s comeback date is still unconfirmed, but there has been a lot of hype surrounding their sopohmore release. After their stellar debut album, I’m pretty sure many people are waiting to see if they will be able to further up their game. 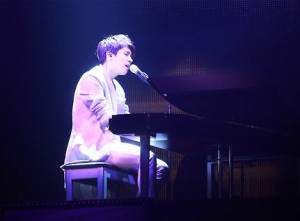 Lastly, Woo-hyun also performed his self-composed song “If I Close My Eyes”, which is an emotional ballad that features him on the piano. I like that Woollim is giving Woo-hyun the opportunity to flex his composing muscles, while showcasing his style at the same time. Initially auditioning for Woollim as a balledeer, he’s slowing returning to his roots and carving out his niche, which is a tad different from Infinite’s regular style. During the world tour, Woohyun performed his other self-composed ballad, “Beautiful” for his solo stage. He stayed true to his fanservice habits, and famously proposed to one fan in each concert stage, with a ring and flower that he purchased with his own money.

And probably the most exciting news of all, Infinite is coming back in April!

It’s tough to really tell anything from their teaser, except… they look badass in white. Woollim has been doing a decent job of giving them good music that challenges and allows them to grow musically, yet still hold on to that distinct Infinite sound. Here’s to hoping that the merger with SM C&C will nevertheless allow Infinite to retain their original style and charm. 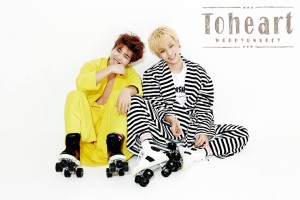 Seems like the impending  debut of Toheart on March 10 will be followed quickly by Infinite’s comeback, and hopefully Infinite H sometime soon after. With L appearing in currently airing Cunning Single Lady, Hoya featuring in Cool Kiz on the Block, and Infinite helming their own variety show This is Infinite, the first half of 2014 is already looking to be a great start for Inspirits.

Raise your hand if you’re excited already. What are you guys most looking forward to?