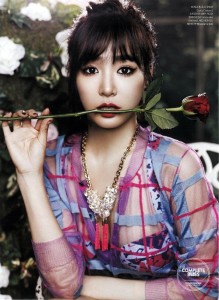 Here at Seoulbeats, various forms of fan made media have been covered. K-pop mashups? Check. Fanfiction? Check. Smut? Check. The penchant of the Exo fandom for their inside jokes and edits? Check. So what is there left to talk about?

As a book lover and fanfiction writer myself, one of my favorite things to do is to look at the translations of K-pop songs that catch my ear. From the heartbreakingly beautiful “Amazing” by Infinite, Beast’s own masterpiece “Fiction” and the tear inducing “Don’t Want to be an Idol” by Vixx — those are just some of my personal favorite songs for their lyrics alone. But knowing the lyrical translation is not enough, sometimes. And since this is the K-pop fandom, you know there’s bound to be an English cover for your favorite songs.

In the sea of fan made material, K-pop English covers are somewhat overlooked in the countless fanart, fan edits and dance covers. But among the numerous English covers of our favorite K-pop songs, there are several that have stood out. There are three reasons why this is so: 1) the same emotions in the original are invoked, 2) the meaning of the song is not lost in the translation and, 3) the quality of the end product.

Seoulbeats has in the past featured PeuyeumUS, the sibling duo whose K-pop English Covers have won over many fans; but there are many memorable English language covers out there, and listed below are just a few. Some have views in the thousands, some have barely a thousand.

“The Boys” – Cover by tripstoomuch; Original by SNSD

Yes. “The Boys” from SNSD, infamously produced by Teddy Riley with an equally infamous English Version that the group performed on Letterman and Live! With Kelly. But let’s forget all about that and focus on this cover. The cover is an acoustic one and — I may be killed here — but may just be even better than the original. One of the negative points of the original was the clutter of the background, making the song sound unpolished and unfinished. But here, without the clutter of the background music in the original and with just a guitar to work with her voice, this cover nails it.  Lyrics-wise, it adapts the released English version so nothing to comment on there. With only 770 views at posting, this deserves even more views.

“Ready to Get Hurt (On and On)” – Cover by Christopher Jordan; Original by Vixx

Back in January this year, Vixx made a comeback that captured attention and has been rising in popularity since then. The song that started their rise? “Ready to Get Hurt (On and On)” which saw the boys go into a darker theme of noble vampires; and the song reflected it, giving us a sense of grandiose without it being overbearing and while sticking to the synth pop that Vixx has been doing. So this cover came as a surprise. It almost sounds as the demo of the song itself. The lyrics are an almost word-for-word translation and minus Ravi’s English in the beginning, it sounds even more grand. True, the rap is missing here, but it covers all bases and is worth not just a listen, but a download.

“Peter Pan” is one of the many quality songs from Exo’s first album, XOXO. Without looking up the translations, one could already hear the various mentions to the fairy tale Peter Pan. The original sounded fine and made use of the background to give a feel of searching for someone you love before going to the chorus where they tone it down a slight notch before picking it up again — kind of like the stages of a story. This cover takes this to a new level. With just a guitar, the cover takes the original and gives us a song that is less upbeat and more heartfelt. It gives us the longing just hinted at in the lyrics of the original.

Back in 2011, Secret’s main vocalist, Ji-eun, had a solo début with “Going Crazy” which featured Bang Yong-guk who later debuted as the leader of B.A.P. This cover features no change in the background. It captures the same haunting beginning and pleading chorus. The rap sections were covered quite well as well, giving the same feeling as in the original. Amongst the covers listed, this is probably the most known and it is easy to see why. It sounds just as polished as the original and leaves the same impression as the original.

In Beast’s discography, “Fiction” stands as their crown jewel. It propelled the group to new heights and it can be attributed to the overall production of the song as well as the lyrics. It told a story of a man who, after being left by his lover, sought to relive their love again and again by writing their story down — the only difference being a happy ending. This cover carries the same lyrics and gives the same sorrow and longing found in the original. It is emphasized throughout the cover and at the 3:29 mark, the emotional climax of the song kicks in. It is an almost word-per-word translation and that together with the emotional likeness is why this is one of the best covers of “Fiction.”

These are just some examples of K-pop English covers. How do you like them, readers? Do they also give you the same emotions as the original? Did it enhance your listening experience by being able to sing along with it in English? There are many other English covers lurking around so if you have one that is as quality as those above, go ahead and share!