The Sunday Social: 6/2, Which is Your Favorite Music Show? 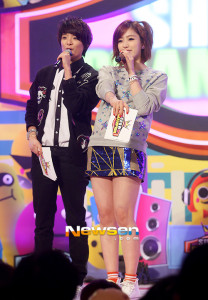 They all have different sound systems, live stage aesthetics, hosts, yet they’re all pretty much exactly the same. Those of you who have been in K-pop for a while, however, have probably gotten to prefer one show over another, and we want to know which you prefer.

In addition, even music shows can’t remain drama-free, as it’s pretty obvious that some companies have special relationships with some of the entertainment companies — MBC is pretty much SM’s plaything, just like SBS is YG’s. Some artists are blocked on Music Bank, and some don’t like performing on Countdown.

There have been several other music shows that tried to assert themselves as one of the major music shows, but none have had the longevity of the above four. MBC’s Show Champion might be one of the newer shows that have managed to stick around, but who knows how long it’ll last?

So tell us your favorite music show, and also anything you’ve noticed about the entertainment companies and their relationships with the television stations.