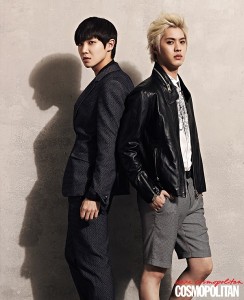 MBLAQ last graced us with their presence in the music circuit with promotions for “Run” off of their 100% Ver. back in March 2012 and their repackaged album, BLAQ% Ver., also around the same time. They’ve been keeping busy with appearances on shows like Dancing with the Stars 3 (Seungho), Real Men (Mir), Laws of the Jungle 2 (Mir), We Got Married (Lee Joon), Nail Shop Paris (Thunder), All the K-pop (Mir and sometimes Seungho), Iris 2 (Lee Joon), Idol Manager (all of them) and other variety along with their BLAQ% Tour around Asia and other music releases, primarily by G.O and Mir.

Though the group clearly hasn’t been silent, they’re overdue for a comeback, making their news of a return early June welcomed. It’s been shown through a submission to the Korea Music Copyright Association that the group’s fifth mini-album is titled Sexy Beat and is set to drop June 4th. To sweeten the pot, the submission also showed that the group is working with some big names for their comeback like none other than Supreme Team‘s Simon D., Ameoba‘s Golden Hands, Primary, and VV:D‘s Zion.T and Crush, all for their title track “Smoky Girl.” It’s not the first time MBLAQ has come in contact with Primary: for the latter’s Primary and the Messengers LP, G.O featured on the track “I’m Back” alongside Yankie and Double K. Also notable on the tracklist are contributions by the members themselves: “R U OK?” has G.O and Mir working with Primary, Thunder participating in the tracks “Dress Up” and “Sexy Beat,” and Mir making another contribution to the song “Girl,” which also has work from singer-songwriter MayBee.

The mini-album has six songs, the only one not mentioned in the above paragraph being “Celebration.” In the group’s interview in their BTS footage for Cosmopolitan, the men describe their choreography as “sensuous and sexy,” which is definite something to look forward to after the more serious releases of “This is War” and “Mona Lisa.” Also accompanying this round of promotions is a stint on tvN‘s SNL Korea, bringing something else to look forward to.

This writer’s looking forward to what MBLAQ’s bringing this round, but how about you, readers? Does this comeback sound like something to watch for? Leave a comment with your thoughts!