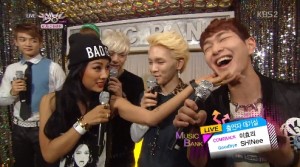 Another week with another set of recaps from the weekly music shows! This week had wins for 4minute (MBC Music Show! Champion, SBS Inkigayo), Shinhwa (Mnet M! Countdown, MBC Music Core), and 2PM for “Comeback When You Hear This Song” (KBS Music Bank). SHINee‘s Jonghyun returned to perform their Goodbye Stages for “Why So Serious?,” an appearance that was also in time for the group’s fifth anniversary. VIXX, 100%, and Lee Hyori, among others, made their comebacks this week. Below are my choices for the best performances of the week, but do comment with your favorites as well!

SHINee’s finally returned to the stage as five, and the stage seems more complete. It’s interesting to see some of the changes in choreography too. And what’s that they’re calling Jonghyun now? Jjong Frost?

I hadn’t heard Younha’s song until I caught this video. It’s a really good song. It moves somewhere without being aggressive about it. And it’s incredibly soothing, largely because Younha’s voice is just like that.

You had to know this was going to be good from the very beginning, with that cello solo and the way Ailee started the song off. Perhaps I’m just partial to strings, but the beginning parts were just so nice. The additions later on to give the song a rock feel helped to flip the song around, giving it a different type of rawness.

The FT Island frontman wasn’t alone today. His members also came along for the ride, which was nice to see. Hongki’s got a fantastic voice, and it never fails to convey emotions. This time was no exception.

The group’s choreography is really good. I didn’t realize how much it depended on two different groups until half of them wore black and the other half wore white for this Inkigayo performance. The interplay between the two groups and how that stays constant throughout the songs was really well thought out and makes for good visuals.

This song has grown on me, devil horns and all. There’s something very charismatic about Lee Hyori, both on stage performing and off stage on variety, so it’s no wonder she’s got fans.