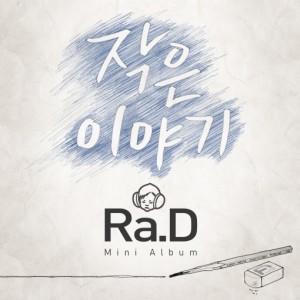 Resident LOEN Entertainment artist Ra.D, who usually spends most of his time behind the scenes as a producer, finally returned on the scene as an artist with mini album Small Story, led by title track “Thank You.” As its title may imply, Small Story is a short and mellow, yet a pretty memorable listening experience. Ra.D puts his skill as a producer to good use by effectively employing a very minimal sound to convey a very heartfelt and simple message that manages to grab hold of you despite its linearity. All of the songs in the album lack the melodramatics and the complexity that potentially muddles the meaning of a typical ballad, and none of the tracks carry the obvious hook-reliance that often depraves the song of its meaning. However, despite the tracks’ linear sound, Ra.D’s songs still manage to be poignant without being melodramatic and catchy without resorting to the grating hook reliance, which is a feat I really applaud.

Small Story starts with the effort’s title track, the very heartwarming “Thank You.” “Thank You” is a great introduction for the effort, for it calmly sets the tone and pace of the entire album, which is mainly acoustic based with minimal embellishments. The instrumental of “Thank You” is heavily centered around its particularly heartfelt use of acoustic guitar, for the same cheery medley remains constant throughout the entirety of the song. After introducing the acoustic guitar, the sound does build up somewhat with the introduction of the stable drum beats. However, rather than significantly spiking to a climax at the chorus as one would expect of a song of this nature, the song instead retains its mellow and jovial pacing even through its first chorus. 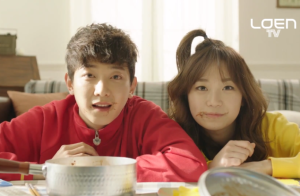 The progression of the song is rather unorthodox, for rather following a traditional pattern a song could follow, the track instead likes to surprise with minimal yet spontaneous changes in pace that deviates from a song’s usual pattern. While the pace of the song stays relatively the same throughout — remaining mellow and breezy — there are subtle shifts in sound that keep the song refreshing and surprising. There are moments where the song slows suddenly and Ra.D takes his time whispering sentimental thoughts, and there are also moments where the song speeds up to the point it’s as if Ra.D is speaking rather than singing. This unpredictability makes the song feel all the more heartfelt, for instead of feeling like Ra.D is simply performing the song for the heck of it, it instead feels like he is actually professing his true feelings, thanking his loved one spontaneously with all of his heart.

The song is already pretty cute and endearing by itself, but the music video for the song takes the song’s pure likability to another level. The sweet and sugary video stars Kim Seul-gi, who recently stole lots of hearts through her performance in TvN‘s Flower Boy Next Door, and features a very simple yet stirring plot focusing around giving gratitude to the ones you may take for granted. And Running Man fans may also notice another little easter egg that makes the video all the more adorable; Maknae FD Go Dong-wan also cameos in the video! 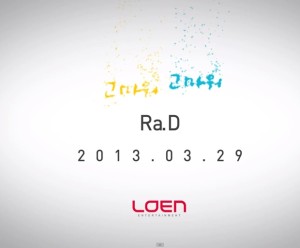 After the jovial “Thank You” is the much more solemn “It’s Been So Long.” “It’s Been So Long” serves as a pretty good foil for “Thank You.” While the previous track was more acoustic based and is lighter in terms of plot, “It’s Been So Long” instead features a more grounded and soulful, piano based sound. While the instrumental was relatively traditional, the rich musings of the piano sounded especially loaded and all the more emotional. Moreover, while “Thank You” had Ra.D stay in roughly in the same vocal range, “It’s Been So Long” has Ra.D stretch and showcase his vocals a bit more; his acrobatics in the second verse sounded absolutely divine. Lastly, the the introduction of Sin Ji-soo towards the song was a refreshing change in perspective musically and lyrically, and the two skilled vocalists certainly complemented each other’s airier tones quite well.

While Ra.D reverts to his more guitar-based instrumental first introduced through “Thank You,” next song ” I Cry When You Cry” follows the soulful mood of “It’s Been So Long” more closely. The more melancholy and bittersweet song starts and stays slow and underplayed throughout before finally reaching a very glorious climax following the very sincere bridge. The contrast between the simplicity of the majority of the song to the layered sound of the specific segment is jarring yet effective, keeping “I Cry When You Cry” from being nondescript. 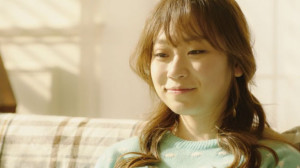 Opening with a very delicate piano medley is the very pretty “Hidden Road,” the following piece of the album. While “Hidden Road” is probably the most orthodox and traditional in terms of sound and progression, it remains to be a very graceful and elegant listen. Its most memorable point is probably is bridge, for the build up surrounding the moment was effective and left a lasting impression.

Reverting back to a more breezy tone, the uniqueness and likability of Ra.D’s vocal tone is most noticeable through next track “Trip For Me.” The very laid back track makes great use of Ra.D’s more breathy and relaxing vocals, making for a very pleasant and breezy listen, a clear contrast of the previous songs on the album. The verses are by far my favorite part of the song, for they carry such a likable, effortless quality to them that manages to be memorable and very charming. In comparison, the chorus falls a bit flat, for it just tends to breeze past you without leaving much of an impression.

Ending the album on a happy note is the very dynamic “2 Homies 2” or “To Friends.” The very sing-song-like song has the same effortless quality that made “Trip for Me” so charming and appealing. Despite being a fairly dynamic track, “2 Homies 2” manages to be immensely catchy, and Ra.D’s charismatic and confident only makes it all the more attractive of a listen, a perfect ending to the album.

Overall, Ra.D’s Small Story is minimal and very simple, yet it manages to be memorable and very productive in sharing its meaning. Admittedly, I highly preferred the breezier and happier tracks of the effort over the more melancholy ones. “Thank You” was simply just to heartwarming to dislike, and “Trip For Me” and “2 Homies 2” carry such a likable effortless to them. However, while the “It’s Been So Long,” “I Cry When You Cry,” and “Hidden Road” did tend to leave less of an impression, they were still great tracks nonetheless, each with its own distinct message to tell. All in all, Ra.D’s Small Story gets a very satisfied 3.95 from me. 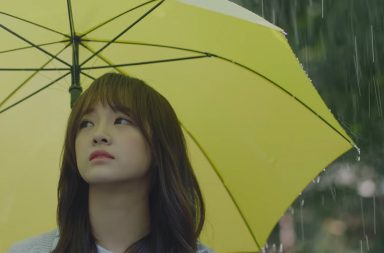 Mellow Out to Ra.D’s “Soundz” 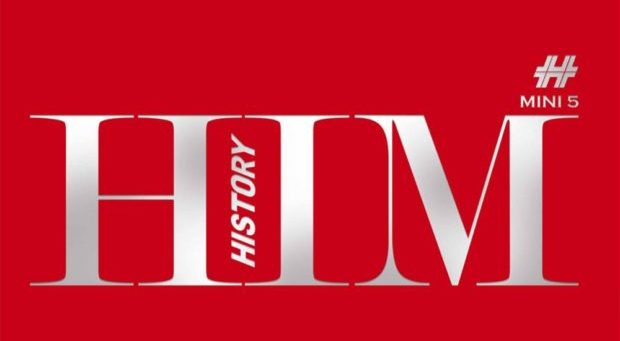