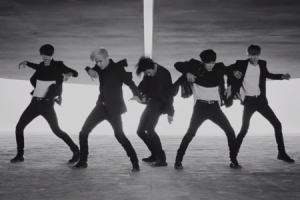 On May 21st we received a long-awaited comeback from Loen Entertainment’s star boy band History after the release of their album Desire in June of last year. After they debuted with “Dreamer” two years ago and ingrained the vision of an original concept quite foreign to K-pop in my mind, I realized the duality of their musical magnificence. Classily-clad with combed-back hair and bowties, “Dreamer” reaped for History a unique vocal color and conceptualization among the blockbuster and neon fringe of other K-pop boy bands.

To put it simply, I personally feel that just as BTS entered the K-pop scene with the catchy  “No More Dream” (ironically the exact opposite of “Dreamer”) and embarked on an omnipotent trajectory, History is an idol group of the same brand and is capable of the same deference. When “Might Just Die” descended from the abode of the god of music, it essentially fathered my point here – History is destined to make K-pop history. Loen Entertainment committed an epic feat by christening its very first boy group “History” and I sense fanciful and ingenious album titles in the near future.

While a vocally brusque and forceful melody creates an ambience of utter desperation, the monochromatic color scheme contrasts with the sharp and subdued hues that unfurl in “Might Just Die” is perfectly praiseworthy. The boys of History very assuredly convey their necromantic desire through the powerfully masculine choreography, remarkably linked physicality and the panting resonances that supply the overall mutability of the song. 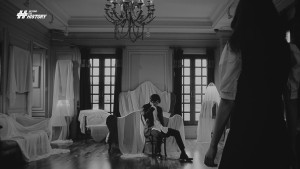 With Kyung-il serving as the romantically destitute man most hostile towards the woman who betrayed him, “Might Just Die” creates a successive passage of personas among the members of History and implies the individuality of their reactions toward loss and grief.

Almost perfectly, Jae-ho represents denial and isolation; constantly swimming in flashbacks of his lover, he is unable to come to terms with the fact that he was betrayed after giving his all to the woman he treasured. His lyrics further intensify the degree to which he inhabits denial and isolation, while the MV correlates by showing him meandering around a destination where couples make memories and get to know each other (perchance a library).

You still remain, I keep seeing you leaving

Whatever you wanted, I gave you my all

The isolation facet of his persona is exemplified in the scene where he sees his lover leaving him behind, to wallow in loneliness and disbelief. Following Jaeho’s denial and isolation, our attention is drawn back to Kyungil’s anger persona where he wrathfully confronts his guilt over being angry by simply getting angrier. Fighting fond memories of escorting his lady love in his car, while exclaiming that she was nothing especially are visual and lyrical contrasts that moreover encapsulate his anger.

She was a person I didn’t know anyway

She could just pass by, but why I closed my eyes because of love, my heart closed because of that

Maknae and star vocalist/composer Yi-jeong fills in the next stage artfully presented in “Might Just Die,” as the bargaining persona attempting to ease his pain by conjuring up explanations for what he could have done to ease his heartbreak, and falsifying his character in attempts to look his vulnerability straight in the eye and say “I followed you here, now what will you do to get me out?” Also strikingly apparent in Yijeong’s vocals is perhaps a variation of G-Dragon’s famously lethargic and relaxed vocals heard at the end of each set of lyrics. Although this is detectably weaker compared to his beautiful voice, the rap flavour of his part is quite refreshing.

Si-hyoung pithily cuts in after Yi-jeong and expresses the depression persona he represents through a strained rap regretting his impasse. His rap illustrates how a rough reaction to grief allows one to sheath themselves from damage and vulnerability. Si-hyoung makes private preparations for an overarching conclusion embodied in Do-kyun’s persona – a sort of terse acceptance. While not a period of happiness, Dokyun’s acceptance is distinguished from depression in that he puts his own feelings first and accepts that he did the best he could and gave everything he could. The only way to liberty is through boldly facing the reality of his situation and no longer keeping his feelings suppressed. 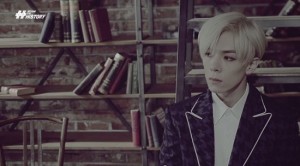 The nothingness that History weakens into at the end of the MV is a prime illustration of overcoming the stages of grief and loss and coming to terms with oneself. As “Might Just Die” folds into a powerful vignette, each member has written his chapter through a realistic delivery of persona and efficiently adds depth to the inclusive song. Beyond the History is a powerful platform for the introduction of “Might Just Die,” and is worth a listen to. I would recommend “Might Just Die” to fans of powerful and visual music tinged in sensible expressionism; the song and MV make a bold statement and assure us that the boys of History are definitely on their way to making history.