Loen Entertainment is on a mission to make a big name for themselves, not only as a large distributor and producer, but as an entertainment company with a distinct lineup made up of hopefully high quality. The newest to join? Five-membered male group History, making their debut with their single album Dreamer, along with a title track of the same name. The group’s name has the intended translation of ‘His Story,’ conveying that the group has perspective and new skills to bring to the arena, much like most new K-pop groups. The five members (clockwise from top left) are Kim Si-hyoung, Jang Yi-jeong, leader Song Kyung-il, Na Do-kyun, and Kim Jae-ho, with ages ranging from 20 to 26 (Western) for this year. The five members were introduced through a rather interesting manner: a ‘Real Dating Tips’ series featuring FIESTAR‘s leader Jei; each member got a topic to cover in their own teaser: spirit, moderation, sweat, wealth, and consideration.

Personally, most of the members have interesting paths. Kim Si-hyoung was in the third season of Ulzzang Shidae. Jang Yi-jeong competed in the second season of Birth of a Great Star. Song Kyung-il is known to be part of the Nuthang Crew, which has other members such as actor/model Lee Soo-hyuk and Big Bang‘s G-Dragon and T.O.P. In 2010, Na Do-kyun joined legendary rock group Buzz, making the group a duo with leader Yoon Woo-hyun, and releasing fuzz.buzz in November of that year. However, he left the group soon after. Kim Jae-ho seems to be the most inexperienced one, with no previous public exposure, and is second youngest.

The group’s debut music video has Son Dam-bi as the lead actress, with a brief narration by labelmate IU at the start. As this is a Loen music video, one of the best parts is that English subtitles comes with it.

From the start, the sets for the music video are rich, full of items, looking very much like a realistic area of work. The narration that IU provides is funnily enough similar to part of the dialogue seen in the first teaser released for the group. The song is distinctly musical in nature, both in the harmonies and in the stage quality.

The plot focuses on the efforts of the five boys who bring a truly beautiful experience for the female lead. Son Dam-bi seems to be a famous and beautiful woman, though her exact relationship with each of the boys is unknown. Si-hyoung plays her guard, according to the earpiece he wears and his proximity to her, and he also helps plan the logistics of the events, such as the location of the car during travel and among the final set of drummers. Jae-ho is the jeweler checking diamonds for their quality in order to make a spectacular gift. Kyung-il is the driver taking Dam-bi to the destination. Do-kyun is the musician playing the piano, though his role is otherwise unclear. Yi-jeong seems to be in charge of communications from afar, judging by his headset and connection to Si-hyoung’s earpiece — though he could also be playing back a tape of the conversation heard at the start. His role isn’t very clear. 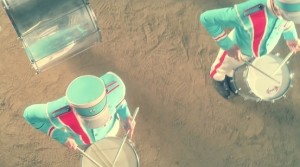 Anticipation builds along with the drama, with the song progressing in a similar manner. A nice touch was also a physical manifestation of the drumbeats present in the song through the line of drummers at the final destination. The events seem realistic, set in the past, with a slightly faded look to help with the illusion of a past time. The care taken with filming most of the scenes mimics the sweeping nature of the song at several points, adding to the unfolding drama. It isn’t until the last lines that the viewer understands that all that was scene was nothing more than a dream full of expectation:

Tonight I stole your heart
And I dream of you

And those lines connect back to the ones from the start that really showed the objective all along: 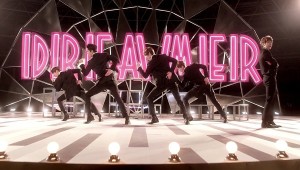 That conclusion is also aided by the magical tendency of the gift in the final box and the sudden downturn in vocals at the end as the members return to stationary poses similar to ones from the start.

At the beginning of the music video, it almost seems like History is going to be a ballad group. There are some movements, yes, but the actual dancing doesn’t start until about two minutes into the video. The stage for their dance scenes has their title song in capital letters, and the radial way the stage and design are formed, similar to that of a circus, keep all the attention on the boys. It adds to the musical appeal of the song. The various suit styles for the members keeps the clothing classy while allowing for ample movement. The choreography sticks to large movements, gestures, and spins, successfully attracting attention. It’s isn’t the most complicated or advanced, but it’ll do.

Overall, the music video does a good job of accompanying the song and keeping attention throughout the video. Some parts of the plot are muddled, such as the roles of some of the members and the exact relationship between the boys and the woman. Regardless, it’s a strong debut that successfully showcases the members and their abilities. 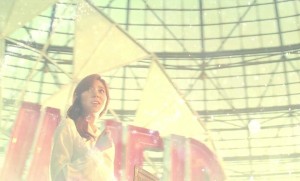 “Dreamer” as a song has a wonderful instrumental to accompany the completely unexpected harmonies. The group’s vocal ability comes across strongly, and this helps to build the song. My criticisms are few. The song moves rather abruptly from soft vocals to a louder and more impactful chorus. That could have been made with smoother texturing. In addition, though the song is very harmonious, there isn’t a satisfying conclusion to all that build-up. It’s as if the vocals dance around hitting that one point that could really raise the song to another level. Furthermore, from watching their live performance(s), it seems that Si-hyoung doesn’t have any lines aside from part of the narration, which is a little disappointing and odd for a debut song.

The other songs of the single album continue with the dramatic turns and harmonies of “Dreamer.” “D-Day” has similar sounds to “Dreamer,” primarily the piano and string arrangements. There is more room for vocal expression and it seems to divide the lines among the members more evenly. This song has more of that high that was missing from “Dreamer.” “The Last Time” incorporates a little more of an R&B style to accompany the smooth vocals. It’s the softer song of the bunch, but it also packs its own punch. The entire single album is cohesive in the sounds used. Each of the songs could have turned out as the designated title song, and I almost wish more of them had been, just to hear them live.

As a whole debut, History seems off to a good start. They have a well-produced music video and decent songs to back them up. The group looks to have strong vocal talent and a sophisticated style that seems to stay away from exaggerated electronic or synthesized sounds, which is good to hear.

But what about you guys? What do you think of History’s debut? Does it live up to your expectations or perhaps create interest in the group? Leave a comment with your thoughts!