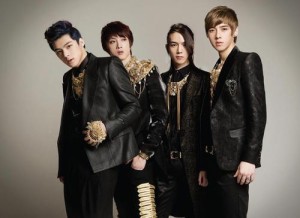 One month ago, Cube Entertainment, in collaboration with Chinese company Xing Tian, debuted boy band M4M and their MV “Sadness.” The group’s concept is to dual-promote in Korea and China, and the band consists of Jimmy and Bin from Hong Kong, Vinson from Taiwan, and Alen from mainland China. Despite an unfortunate band name (Mystery ForMula was the intention), a mediocre MV and a thus-far quiet promotion cycle, the boys’ talent and charisma stands out, showing a lot of potential for this rookie group.

“Sadness” is a standard dance song with a steady beat and earworm catchiness. What kicks it up a notch is the contrasting sweet melody and softness in the boys’ voices, making for a harmonious song that could still be played in a club. This dynamic is appropriate to illustrate the push-and-pull of heartbreak and sadness in the lyrics, and it’s nice to hear a dance song that also illustrates the band’s singing prowess. It could do without the tired, pseudo-dubstep during the bridge, but at least the beat suits the music, even if it is following a recent trend. Musically, “Sadness” is not a mind-blowing song, but a sometimes beautiful and consistently solid one.

Onto the MV. It is the familiar format of a dance video with dramatic lighting and lots of gorgeous shots of the band members. Unlike the song, the metal sets contain no soft edges and the look is very dark, with the lighting throwing high-contrast shadows onto the members. Unfortunately, the sets look so similar to other K-pop MVs that even though the theatrics are high, the rooms are uninteresting. There is an over-reliance on flashing lights and camera-shaking for visual interest, which not only detracts from the dance, but also becomes messy during the bridge as both effects mimic the dubstep rhythm. Fortunately, while distracting, the set and effects don’t overpower the members, so the viewer can get a good introduction to the band.

The dance has some appealing circular formations and a fun face-rubbing hook, but the predominant dramatic arm gestures do little to make the dance memorable. Referencing their name “M4M” with their bodies at the end of the bridge is a nice touch because it is a subtle, yet striking pose, but the cheesy, computer-generated letter-painting ruins its effectiveness. The eye-catching part isn’t the dance itself, but the fluidity and ease in which the members perform it. Their dance skills are apparent and a good display of how a band can take an average dance and make it look better. 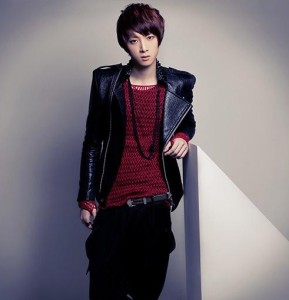 M4M spends the entirety of the video looking serious and distraught, which is appropriate given the song’s theme, but it would’ve been nice to include some emotional variation other than pained reaching for the camera. However, the members show an impressive amount of control and confidence for rookies, particularly rapper Bin. They seem comfortable and natural in front of the camera, which is probably due to the long, four-year training period most of them went through. Their poise is the most noticeable feature of the video, and luckily, this is also the most important quality for a debut group to make a lasting impression.

In the MV, the boys sport red and blue princely jackets and some seriously sparkly necklaces, but there’s not much else to say about the outfits besides the fact that they look good, as one would expect of a K-pop band. This expectedness characterizes the whole video; the MV builds on previous successful K-pop concepts, but precisely because of this reason it ends up looking like a generic mash-up.

The most interesting thing so far about the group isn’t their MV, but Cube’s dual-country marketing strategy. We’ve seen this strategy with China before, however this time M4M is not a part of a larger group like EXO-M or Super Junior-M, nor are they trying to establish themselves in Korea first, as many rookies do before jetting over to another country, like Japan. So far, they have promoted in both countries, first debuting in Korea, then holding a showcase in China several weeks later. 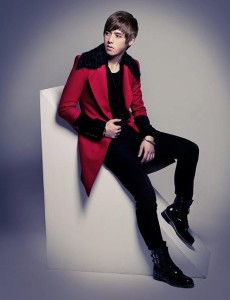 Arguably, Cube is promoting them more in China. The boys are currently focusing their efforts in the mainland, doing interviews and making appearances at media events after their short debut in Korea. They are also scheduled for activities in Hong Kong and Taiwan. They have both a Korean and Chinese version of “Sadness,” but the official video on Cube’s channel is only in Mandarin. Furthermore, while all of the members speak Mandarin, during Korean interviews they have used a Korean translator, overall making M4M seem like a band manufactured for the Chinese market, but with K-pop corporate training.

This makes it unclear as to how Cube wants to present the group, as they’ve said numerous times that M4M is an international band. By simultaneously debuting in both countries, it has the appearance that the band will travel back and forth, and that they are meant to target both countries. However, since M4M has more activities as of now in China, and it’s unknown when these boys will be popping back over to Korea, they might turn out to be similar to EXO-M, where they join their parent company for family concerts. In reality, it seems like M4M is Cube’s Chinese band in an effort to crack the Chinese market. If the group is truly dual-promoting, it would make sense to do small promotions over an extended period of time, and therefore, it will take longer to establish themselves in both countries. Only time will tell if Cube’s secretive training and mysterious promotion strategy will work.

Adding to the confusion and frustration, their mini-album has yet to drop, despite the track list on their official website. At the end of one month, all we are left with is one cookie-cutter MV and a whole lot of questions. Also, some really great footage from their Beijing showcase.

Fortunately, none of this has detracted from the boys’ talent. It’s no small feat that their skills have come across through a very generic video and perplexing promotion cycle. The MV garners a rating of 3.2/5 from me, but the members’ aplomb deserves more. Here’s hoping that we see more of these boys soon, before other comebacks and debuts steal the spotlight.

What does everyone think of M4M and “Sadness”?