HISTORY Pushes Ahead With "HIM" 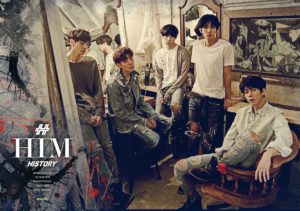 Dropping their latest comeback mini-album on the 11th of April, HISTORY returns to the Korean music scene with HIM, after having been away for almost an entire year. Since their debut in 2013, HISTORY has unfortunately been flying just under the radar for most. Their previous mini-album, Beyond the History, had given them a shot at greater popularity, with the title track “Might Just Die” featuring the members revealing their abs as part of the dance. While the flashy choreography did help them gain a little more recognition, the LOEN Entertainment boy-band hasn’t yet quite been able to get a proper breakthrough.

Despite a lack of stellar results, however, the 5-member band has proven itself to be a group that consistently surprises — and in a good way. With this latest mini-album, they have once again defied expectations and dropped an album not quite like any of their previous albums. Featuring four new tracks and the Korean versions of two previously released Japanese tracks, HIM builds a mini-narrative around two aspects of being a guy — the wild and the emotional.

The first track, “Wild Boy”, starts us off on an upbeat note. Given that it starts off relatively empty with only Yi-jeong rapping over some beats, it almost sounds like a short introductory track. But before long, the other members join in and as the song progresses, it builds in texture and gains momentum before dropping into a straight-up EDM chorus with only an echoing of the lyrics “anyway, I’m wild boy”. This first track serves as a good hype track, setting the stage for what is to come, and providing for a rather appropriate backdrop with which the second track is set against. 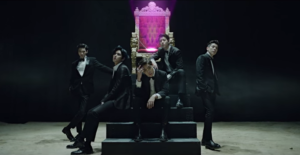 As the title track, “Queen” is an extremely catchy track and definitely ramps up the bad-boy factor. About the heady excitement that comes with living life on the wild side, HISTORY is sexy in imploring the listeners to be adventurous and have fun. The song begins with a catchy, recurring saxophone refrain over a trap beat which immediately captures the listeners’ attention and makes you want to continue listening. Jae-ho goes up first with his rap verse, which is a nice change from his usual vocals, followed by Yi-jeong,with another rap verse. Kyung-il‘s mild, almost gentle, vocals are oddly befitting for the pre-chorus before Do-kyun, the main vocalist, comes in powerfully for the hook and then the track launches right back into the saxophone bit, highlighting the beats which are, no doubt, the main feature of this track. The only thing I found slightly puzzling about this track was the lyrics, which were rather confusing and slightly abstract at some points in time — I have no clue why they would refer to themselves as pac-men. Nevertheless, “Queen” is no doubt a suitably memorable title track.

Taking a break from the hot and heavy, the next track, “Baby, Hello” is a slow jam track with a soothing, R&B feel to it. Singing about a lost love, the song starts off with a slightly jazzy piano riff, finger snaps and Kyung-il’s calming voice. Despite its forlorn premise, the track comes off relatively optimistic, with the lyrics alluding acceptance of a relationship that has ended.

Close on the tails of “Baby, Hello”, Do-kyun makes a solo endeavour with “Whenever”. Given Do-kyun’s vocal quality, it is unsurprisingly a ballad. He implores his lover to confide in him whenever she needs to, and that he would always be there for her.

When that time comes, think about me

Don’t cry, just tell me everything

I will hold your hand and make you smile again 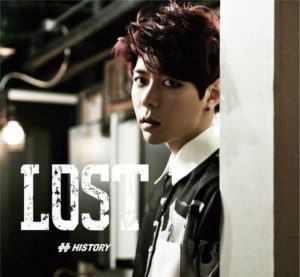 As his first solo track, “Whenever” is a safe choice and demonstrates Do-kyun’s knack for portraying emotions through his voice. Musically, however, the song is not particularly exciting. It goes for a very standard ballad formula, including a key modulation in the last chorus. Nevertheless, it is a nice, soothing song to listen to when you’re not quite up for anything too intense.

Finally, the album wraps up with the Korean versions of “Lost” and “Liar”, two tracks that had previously been released in Japanese.

Overall, HISTORY has proven itself with yet another solid album, although it is unclear if this album will be able to give them that final push into stardom. “Queen” is clearly a winner, but the other three tracks are perhaps just not as impressive. Nevertheless, HISTORY’s got talent — as clearly seen from the immense involvement of the members in the music production — so here’s to wishing them all the best in this latest comeback!

Did you enjoy HISTORY’s latest mini-album?