Pretty much the entire world has been awaiting Psy‘s follow-up single after the phenomenal success of “Gangnam Style,” and the rapper has promised to deliver by announcing his new song “Happening” earlier today.

Psy is slated to reveal “Happening” live, during his concert at the Seoul World Cup Stadium on the 13th of April. Better yet, the concert is to be broadcast live on YouTube, making this release a big event. Psy has always been praised as a fantastic live performer, so being able to see him in his element, even if via a screen, is a treat in itself. And with Psy making the announcement in both Korean and English, with subtitles in a host of other languages, “Happening” looks poised to be the next step in Psy’s global campaign with US manager Scooter Braun. 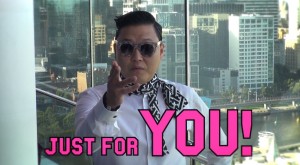 Many have speculated that Psy would likely become a one-hit wonder after “Gangnam Style,” predicting that no follow-up would be able to match the success of the former. Now that said follow-up is now actually, well, happening, we are finally getting closer to seeing if the reality matches these expectations, or defies them.

So, what say you, readers? Do you think Psy could have another hit under his belt, or no? Either way, I’m just happy for the chance to be able to see a Psy concert live — so happy, in fact, that I’m willing to overlook the “Gangnam Shake” he performs.