Seeing K-pop on twitter is no novelty, as we’ve discussed before; but it does seem to be so when said tweets involve a foreign (read: Western) celebrity. And the microblogging site witnessed a plethora of such celebrity tweets last week, all over one 34 year old South Korean guy singing about sexy ladies. I am referring to, of course, PSY and his “Gangnam Style” MV. T-pain, Josh Groban, Scooter Braun and Harry Shum Jr. were some of the Tinseltown celebs to tweet the MV, along with Robbie Williams adding it as a post-script to one of his official blog posts, features in Gawker, The Soup, one of the best pieces of journalism on K-pop that I have seen so far by the Wall Street Journal–and then, finally, “Gangnam Style” made it to CNN.

Apart from cringing at all the issues we at Seoulbeats have with Western media outlets covering K-pop (over-generalisations, lack of research) being presented in audiovisual form, there was also surprise at how quickly the video had gone viral. Pre-dating all the noise made about it on mainstream internet sites, the Starcraft fan community fell in love with the song after hearing it on livestreams and at events, a love which spread to the wider e-sports community (as seen in the video below) and eventually to Reddit, from where it horse-danced its way to viral fame. If CNN is the endgame of a viral video, then Reddit is the place where it starts becoming viral–its origin.

After CNN’s report, media focus on the video has died down, but that doesn’t mean the general public have moved on: at the time of writing, “Gangnam Style” was one of the Top 10 Dance songs on iTunes in Finland, Denmark, New Zealand, The US, Sweden and Canada (and is even said to have reached top spot in a few of these countries), was the 3rd most viewed video on YouTube (on the heels of Justin Bieber and Carly Rae Jepsen), spawned many reaction videos and parodies and even a t-shirt.

The biggest question that people may be asking about these events may not be so much how, but rather: why? After all, aren’t SNSD, 2NE1 and the Wonder Girls the fore-runners in the race for US fame? How did PSY manage to gallop past and overtake them so easily? “Gangnam Style” isn’t in English, PSY has no ties with American producers, no deals with American record companies, or collaborations. There is also confusion as to whether PSY even counts as being part of K-pop. But this isn’t about just K-pop, it’s about the wider music industry which does not consist solely of idols and has other artists as well who cover different genres. PSY is one such artist; he is not representative of the K-pop sound (take note, Western media), but that doesn’t mean he’s not part of mainstream Korean music, either. It’s easy for non-idol fans living outside of Korea to sometimes forget that idols aren’t the only sources of music in South Korea. The word “K-pop” is pretty much synecdoche for “Korean Music” outside of the Korean Peninsula, and this is what we’re seeing foreign media outlets doing to frame their reports on “Gangnam Style.” This isn’t accurate at all, but the only way to overcome this is with greater awareness, which will only come with more time; it is a gradual process.

But coming back to the “why,” there are elements that have helped “Gangnam Style” along, all of them mimic-able by the general public. One such element, as Fatouma noted in her MV review, was the choreography: the “horse dance” is quickly becoming ubiquitous, as is the “sexy lady” move–and both are coming to a dance floor near you. Other factors include a chorus of fantastic sing-along quality that requires very little in the way of vocal gymnastics, as well as a sense of humour that goes beyond language: the cartoonish, almost slapstick way in which the gorgeously shot Gangnam district, and PSY are portrayed is a vital part of the MV’s success. And it is this self-deprecation on part of the hip hop artist that holds the key to his viral success in the West. PSY’s willingness to completely ridicule himself and throw any thoughts for his reputation and image to the wind makes him come across as someone who doesn’t worry about superficial matters, who isn’t afraid of ridicule, who isn’t afraid to be himself: someone who is real.

If an artist is willing to forgo the cool act for their art, it makes them more authentic and caring about their work. If an artist is seen placing their art above fame and fortune, then that artist is seen as being more authentic by Western audiences, and thus more deserving of attention. And conversely, artists seen as not being genuine have scorn poured on them by an outraged public, as seen with the fallout following reports of Lana Del Ray‘s previous album release under a different name and rumours of her rich father funding her career. Coupled with authenticity is also the virtue of modesty. Being unassuming about one’s success or potential for success is a quality that Western audiences find morally strong, and thus very attractive. PSY didn’t seek out this success–“Gangnam Style” wasn’t designed to cater to anyone outside of Korea or the wider K-pop community, and yet it’s topping iTunes’ dance charts in Europe–PSY has managed to effortlessly attract listeners with no promotion by either himself or YG Entertainment. 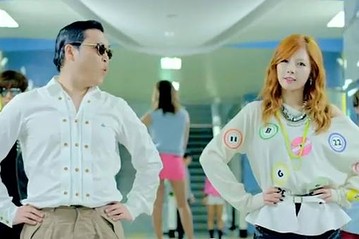 But can K-pop do the same? Can idol groups replicate what PSY has done to achieve the same kind of viral success, and use that to gain a more stable position in the Western music market? The answer is, no. PSY’s genre of hip hop allows different forms of expression, such as extreme self-deprecation, that just don’t translate over to idol culture. To put it bluntly, K-pop does not allow for the kind of humour that PSY uses in “Gangnam Style;” sure, there are moments (as seen in “So Hot,” “Oh!” or “Follow Me”), but in the end idols are still expected to be taken seriously by the audience.  This attitude is prevalent in K-pop itself, but in a different industry in a different country, the same expectations cannot be made due to cultural differences. K-pop will have to find its own way to break into the US market, if it so wishes (we know that Lee Soo-man isn’t too hot on the idea)– something that is already being worked on, but not yet completely figured out.

It remains to be seen what all this new-found fame means to PSY, with the only indication so far being switching his Japanese debut song from “Roppongi Style” to “Gangnam Style,” but that may change if any tangible offers were to arise. YG artists have a history of attracting collaboration or production deals (as seen with Pixie Lott and Will.i.am) and PSY’s ability to speak English (he must have picked up some skills while studying at the Berklee College of Music) would only further endear him to an audience that already enjoys his sense of humour and personal style. But come what may, it cannot be argued that PSY, like anyone who manages such a feat, deserves his success–and anyone who thinks otherwise should probably learn more about the art of appreciation.

What are your thoughts on PSY? I, personally, am waiting for Ellen Degeneres to discover the “horse dance;” what about you?