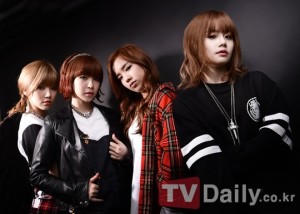 D-Unit is back with Affirmative Chap. 1! Affirmative Chap. 1 is the first of two albums (the second to be released in April), and has received much hype due to Block B’s Zico producing the title track, and the group’s addition of Jney from GP Basic. The new tracks on Affirmative Chap. 1 shine musically, with each song exhibiting experimentation and complex compositions, but the album as a whole lacks a cohesive sound.

The album starts off strong with “Stay Alive” (Feat. Vasco), which was pre-released in February. This intro is pure hip hop, showing off the girls’ rap skills. The lyrics are part flaunting, part promise to “newly write the K-Pop swag.” However, the most creative part of the song lyrically is the intertwining of Korean and English, with words and full sentences in both languages rhythmically playing off of each other. Unfortunately, the impressive builds in each verse lead to a disappointingly thin, auto-tuned chorus. Still, the message of girl-powered strength comes through, and if anything, the song could’ve stood to be longer with more wordplay.

[youtube http://www.youtube.com/watch?v=055zy2tiB1Q&w=560&h=315] “Stay Alive” indicates that the album will be heavily influenced by hip hop, but that expectation immediately dies with the next track, “Talk to My Face.”

“Talk to My Face,” the title track produced by Zico, is the group’s biggest departure from their darker-sounding singles and usual electronic dance/R&B combo. Most notably is the added rock influence, as the song begins with a light guitar that morphs into strong chord progressions, which remain consistent throughout. As the song’s overall tone is bright and energetic, the rock influence anchors it, retaining D-Unit’s edginess with new flare. It’s still an electronic dance song, but a band version is easily imagined. The prominent rapping also adds to the song’s edgier sounds. This balance between styles illustrates the lyrics of a girl’s insecurity about her boyfriend’s actions, but also her frustration at his refusal to talk about the relationship.

[youtube http://www.youtube.com/watch?v=mzEEwAeNr0Y&w=560&h=315] Ujin’s high, clear vocals stand out, especially in the beginning, setting the tone for the lighter qualities of the song. Zin’s singing also deserves the spotlight, as her lower range fills out the rest of the vocals. Ram’s rapping is solid, but her belting gets a little too nasally at the end. While Jney holds her own, her part is minimal and repetitive, but given that she’s the maknae and newest member, this is to be expected. For all you starved BBCs, the interjections of Zico’s “brrrrrah” add vocal variety and humor to the song, as does his saying “D-Unit” in the fastest way possible (“dih-unt!”). Musically and vocally, this is a great song for their comeback.

However fun, “Talk To My Face” is also the most incongruous with the rest of the album. From here, the tracks turn back to the electronic mix we’ve seen previously from D-Unit, probably because two of the tracks (“Sleeping In Pt. 2” feat. C-Luv and “Luv Me”) are digital singles from last year.

“Lockdown” still experiments musically like the title track, but with beat pattern and sound effects. Unfortunately, the result isn’t as pleasing. The constant buzzing and distortion is too much, and while the video game, laser-gun sound effects might reflect the lyrics of a confident girl “capturing” someone’s heart, they conjure up images of arcades more than anything else. The most noticeable feature is the constant breaks in beat pattern, which despite a very steady rhythm, stop the song’s flow. Overall, the track begs to be faster. Eventually the song fizzles out, awarding “Lockdown” the title of least favorite on this album.

Next is “Alone,” which harkens back to the best tracks in Welcome to Business with its creative mixing and impressive vocals. This track also features a guitar, but a softer, acoustic-sounding one that adds to the melancholy atmosphere. Before the first chorus, the song has a nice sparse quality, utilizing sound effects and auto-tune to give a haunted feel, signifying — you guessed it — being alone. The theme of heartbreak builds, as do the girls’ overlapping vocals. This is the song that shows off the girls’ singing, as it contains a range from softness to belting. What would have pushed it over the top is if there was more harmonizing, which D-Unit is capable of doing beautifully, like in “Sleeping In.” While a solid track, “Alone” just misses the mark of being show-stopping.

The last new song on the album is “Scarecrow,” a piano and electronic dance combo. The song does not have the hip hop element displayed in the other songs, but does show a surprising vulnerability in the girls’ voices. The song is about another breakup, but speaks much more to longing and waiting (like a scarecrow) for their love to return. Their restraint is beautiful, but competes with the imposing dance music, making the song battle on whether it should be a piano bar ballad or dance club jam. The very end of the song is lovely, however, and would’ve been a great end to the album, if only they had placed “Luv Me” somewhere else.

Overall, the album shows a vocally well-rounded D-Unit. The original three members are individually strong singers, and all have a go at rapping, though Ram’s ability particularly stands out. What’s even better is how well their voices work together as a group, and the album’s biggest flaw is that it does not take advantage of this talent enough. The addition of Jney was not offensive musically, but has more effect visually than vocally, as she appears to be non-existent besides the title track. 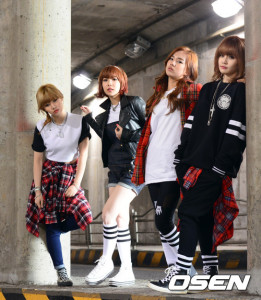 The other qualm with the album is its lack of overall cohesiveness. There is some great play with music styles and acoustic-sounding instruments, but it is missing an element to link the songs together, and has a tendency to get mired in its electronic effects. This could be partly due to the fact that the first two tracks, while both strong, contrast heavily and do not set any tone for the album. The rest of the tracks are more subdued, and never achieve the same energy or decisiveness as “Talk to My Face.” Also, the inclusion of “Sleeping In Pt. 2” and “Luv Me” feels a bit like filler. Given that there are another six tracks to be released, it might have been a better choice musically to release all the new tracks on one album, and exclude the previous digital singles, assuming that the other new tracks add to album cohesiveness.

Despite this, the new tracks show great promise, and the girls successfully achieve a good amount of musical variety. For these reasons, I’m giving it a 3.75/5.

How about you, readers? What do you think of Affirmative Chap. 1?