G.NA recently returned with her fourth mini-album, and the lead single “Oops” has been relatively lackluster compared to the musical gem that was “Black and White.” What’s more interesting than the new single is her recently released choreography practice video featuring her manager who, despite being far less photogenic than G.NA, definitely isn’t shy of the camera. 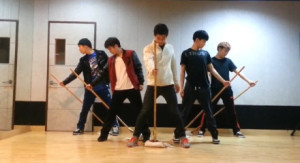 The marketing strategy behind all this is to give the songs as much exposure as possible. The more times the song is played and heard, the more likely it’s addictive hooks and jaw-dropping dance moves will become embedded in the consumer’s subconscious, causing a sense of recognition and familiarity which eventually leads one to believe that a song or idol is something that is or should be liked. Of course, inspiring a bunch of dance covers doesn’t hurt either.

This latest gimmick shows that whether or not the idol is in the forefront, if the video does enough to gain attention, it has succeeded on a marketing level. Have our readers been captivated by G.NA’s choreography video for “Oops?” Feel free to share some of your favorite dance practice videos below!