Talking With the Fans: Getting To Know PeuyeumUS

They say imitation is the best form of flattery, an adage which goes a long way to explaining the prevalence of song covers. What better way to pay homage to a favourite idol than through their music? There are a multitude of channels on YouTube filled with fantastic covers of K-pop songs, and PeuyeumUS is one of them.

Brother and sister Ankgy and Arlene Budiardjono are the people behind PeuyeumUS (named for the fermented rice cakes found in Indonesia and the Budiardjono family’s country of residence), which started off as a YouTube account for their father that they have now made well known with their K-pop covers featuring English rather than Korean lyrics, calling them “K-Pop English Covers” or KPEC. Like many cover artists, the siblings have sung songs by a variety of idol groups from Big Bang, to f(x), to U-KISS and VIXX, whose songs are featured in the latest KPEC:

Like many K-pop fans, YouTube was the conduit of K-pop discovery. “I randomly stumbled upon Brown Eyed Girl‘s “Abracadabra” on YouTube and was absolutely mesmerized,” recalls Arlene. It was through his sister that Angky also discovered K-pop: having been showed SNSD‘s “Gee,” his first response was one many people new to K-pop have — “why are there so many girls in one group?!”  Afterwards, though, “I couldn’t get them out of my head…”

Both siblings were involved in music throughout school — Angky focused on voice while Arlene was more interested in instrumental music — and Angky had been posting acoustic covers of American pop songs on YouTube , so it seemed only natural for the duo to start making K-pop covers. “It was originally Arlene’s idea that I write an English acoustic version of Taeyang‘s “I Need A Girl”” says Angky. “And after it got more views and responses than we expected we decided to make more.” ” I think I told him to write it because he told me how much he liked it. ” adds Arlene. “I didn’t realize it would be such a big hit.” But the success of that cover proved to be the impetus to make more English-language covers:  “We weren’t confident about our Korean skills, but we loved K-pop songs so much that we decided we wanted to try to make them more accessible to at least English-speakers!”

Though translations for K-pop songs are readily available online, the duo still need to rework the words to better fit both the tune and conventional English-speaking patterns. This may take an hour or more to do, but it’s just the start of the duo’s cover-making process. Deciding on the chords is the next step; whether the original flavour of the song is to be maintained or whether it is altered to make it suit the acoustic style is the main factor behind this decision. Then, following much practice using the chosen lyrics and chords, Angky and Arlene record the video and upload it onto their YouTube channel. This process generally takes up several days, sometimes even a whole week, with a bulk of the time spent practising. However, they do have an impressive personal best: “We wrote the lyrics, chords, and shot the video all in one day.” 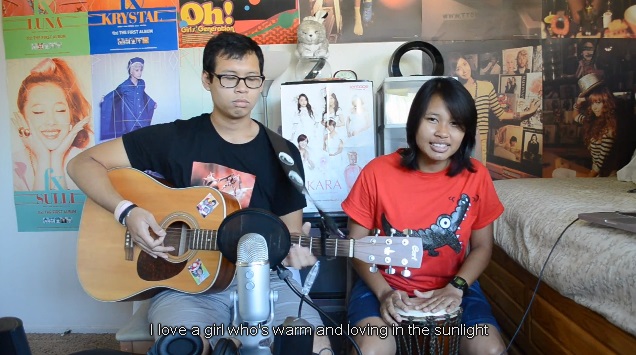 The pair cover a wide variety of K-pop groups, spanning various sounds. So naturally there would be some groups that took more effort than others? But while tackling Changmin‘s screams in “Keep Your Head Down” sounds daunting, it seems boy groups in general are a tough bunch to cover. “Male idol groups tend to sing pretty high, but also pretty low.  [F]inding the right key to sing them in can be a bit troublesome.” says Arlene. “Girl groups are easier because they tend to sing consistently high — so it’s easier to find a key to sing their songs in.” In fact, it is a girl group cover (Sistar‘s “Loving U”) Arlene nominates as one of her favourites — “I love the song, and I think our lyrics and arrangement really fit it well!” — while Angky loves his sister’s rapping for their English cover of “Gangnam Style.”

With the warm reception they’ve received with their covers, Angky and Arlene seemed to have found the confidence to expand their repertoire to Korean-language covers as well. Entering contests like many cover artists seen on YouTube, the duo have the distinction of winning the L.A. division of last year’s American K-pop Contest run by the Korean Cultural Center with their cover of Ailee‘s “Heaven.” First prize in the competition also included plane tickets to Seoul, which saw the siblings enjoy a well-deserved holiday in the South Korean capital. Asked of their impression, they recalled that “people would go out of their way to help us out and befriend us.  That was actually our biggest surprise.  We were so happy because of that… We would love to go back.” 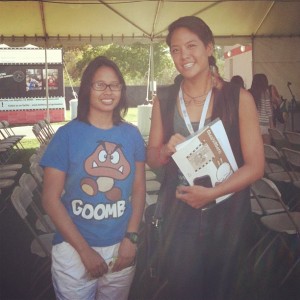 Lately, the duo have been performing at various K-pop gatherings — KCON ’12 attendees may remember seeing them perform, as would those who were at KPOPCON ’13. Comparing with making cover videos, Angky and Arlene describe performing live as “different, yet the same.” Because they rarely layer audio for their cover videos, the siblings find a lot of similarities between the two activities;  but though convention stages don’t allow the opportunity for multiple takes, as with their videos, the thrill of performing for an audience leads them to agree that “performing live together…is definitely better than making a video.”

That doesn’t mean they are done with YouTube, though. After a brief hiatus in late 2012, the duo have returned to uploading covers of the latest K-pop songs as they are released, in conjunction with live performances; hopefully there will be more of both to come in the future.  Seoulbeats would like to thank Angky and Arlene Budiardjono for talking with us, and wish them the best in their K-pop adventures.

Readers, what are your favourite K-pop covers by fans? Have you seen any performed live? Let us know in the comments below!