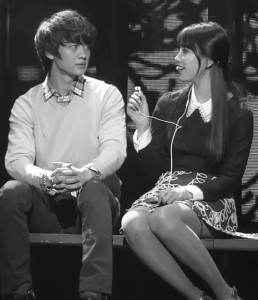 I don’t know if it’s the weather or my non-Christian beliefs, but Christmas music has never been something which I really enjoyed. Save for Carols by Candlelight performances during primary school and the tunes played in shopping centres all throughout November and December I’ve never really bothered with the genre. This last week of watching music shows, however, may have softened me. Oh K-pop, how you have changed me.

In the lead-up to Noel on Tuesday, many a Yuletide tune was presented for our viewing pleasure: Mnet M!Countdown had the most gorgeous white staged that was personalised for each performance with different props, projections and lighting; KBS Music Bank featured collaborations galore; MBC Music Core decided to be a grinch and block half the performances; and SBS Inkigayo bucked the trend and kept things regular for the last week of music shows for the year.

Let’s take a gander at this week’s performance highlights, shall we? And don’t foget to nominate your highlights in the comments, too!

First up we have f(x) performing their song from the 2011 SM Town winter album The Warmest Gift. The stage placement of Victoria and Sulli is a bit off and I still can’t tell who’s singing and who’s lip-syncing, but the giant baubles and lighting made up for it. I tell you, that stage is gorgeous. It was also nice to hear female voices singing in lower registers, something of a rarity, especially for SM.

While the Music Bank performance had a much more Starship Family feel to it, this performance afforded Soyu a much-deserved chance to hog the limelight. Going against the crimson trend with green and black, she held her own against an always wonderful K. Will. Sharing lines with K. Will meant that Jeongmin may have gotten the short end of the stick here, especially when he had nothing to do but stand awkwardly while K. Will and Soyu adlibbed. The stage decorations for this performance were perfect with the fog, fir trees and even a snowman for Jeongmin, so that he wouldn’t have to be completely alone.

I’m not a fan of the dance-pop original, but there’s no going past this acoustic duet with Neil and Juniel. Not being all that familiar with the FNC songstress’ work, it was nice to hear her perform something bolder, while Neil sounded great as always. This is why we need more collaborations: I would pay money for that.

Sung-gyu’s M! Countdown stage looked spectacular too (I’m never going to shut up about that stage), but he just exuded so much confidence here that it would have been a crime to disregard this performance. Sung-gyu started off strong and really got into it, finishing off by blowing a kiss to the audience. Good on Woollim for answering prayers and having follow-up promotions: “I Need You” is a gorgeous song, and Sung-gyu sounds fantastic in it.

The latest performance from Kara‘s solo collection is leader Gyuri’s, and her solo debut stage was an exercise in decadence. The regal décor and drama perfectly complimented her performance. Gyuri sounded great, she was in total command of the stage and that red dress looked fantastic on her. She was so great that I can almost forgive that overdramatic ending (though I am worried about her knees a bit, that must’ve hurt).

Sunny Hill‘s “Goodbye to Romance” on SBS Inkigayo, Sunday the 23rd of December, 2012

The ladies are on point as always, eschewing choreography for some good old-fashioned singing-on-the-spot. Fan-chants are great, in moderation, and Sunny Hill manages to get the (loud) support minus the hysterics (for the most part). The Christmassy projections were perfect for the season;as already mentioned a lot of performances this week featured red, so, like with Soyu’s dress earlier, the green lighting that bathed the stage was a very welcome sight.

Hip hop trio Epik High went with a less antagonistic twist on their choreography in the lead up to Christmas, with more polite shoulder-tapping and hand holding than shoving by a bespectacled Tablo. Our pink apron guy went all out for the winter season and got to perform his dance solo uninterrupted. Overall a softer performance, which was nice.

And to finish off this recap, we have Ga-in and her performance of “Gaze,” from her latest mini album Talk About S. Yoon Jong-shin’s expressionless performance was hilarious, but it was Ga-in’s seduction of Yoo hee-yeol that stole the show, with the latter trying very hard not to corpse as Ga-in’s approach induced a nosebleed (ha). Ga-in herself almost lost it at the end, but she managed to maintain their composition. As droll as that pairing was, though, I think Ga-in-accordion remains my top Ga-in OTP (after Adam Couple).

And that’s it for 2012! Next week sees the annual triumvirate of Gayo Daejuns from SBS, KBS and MBC, so we’ll see you all next year with more of the best of the weekly music shows!