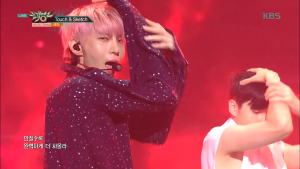 It’s time for Best of Weekly Music Shows! There’s excitement for the comebacks of Stray Kids, DIA, Red Velvet, and Ikon. Debuting this week are D-Crunch and 12Dal along with Leo of VIXX making his first solo venture.  As new and familiar faces appear on these shows, it’s not a bad idea to learn about anyone you might not know. They could become another favorite.

Leo earned his first win as a soloist on SBS The Show and so did Shaun on KBS Music Bank. “Killing It” gained Ikon another trophy from Mnet M! Countdown, and Twice added to their collection with a win on MBC Show! Music Core. Zico and IU came out on top for “Soulmate” on SBS Inkigayo. Congratulations!

I took a minor hiatus, but I’m back to share my fave performances with you! Of course, I don’t expect my picks to be everyone’s cup of tea, so you’re more than welcomed to include the stages you liked in the comments.

They’re back! Okay, this group wasn’t gone long, but they certainly were missed. Out of all of their stages from the week, this one displayed their powerful synchronicity really well. I love the shift in mood with the lights being utilized to enhance the vibe. It’s a spunky song being performed by a group that embodies its energetic spirit.

Dramatic intros are the best. They just are. There’s something about creating a mood through carefully planned choreo, lighting, and set design. Watching Chani dance through fog while being backlit was quite a visual treat. Didn’t mind that the fog remained a little once the song started, either. Those red outfits were the chocolate syrup needed to complete this performance sundae.

Leo is this incredible singer whose passion for performance is hard to miss. It’s sad that his mic didn’t properly capture his voice, but the cameras did a decent job catching all of his fluid moves. Shout out to the stylists for dressing him in light attire that left very little/too much to the imagination. If you’re a Leo stan, I strongly recommend grabbing water and a towel because this stage will leave you sweating.

This group is nailing the covers. What appeals to me most is that they don’t lose their identity even when they’re singing someone else’s song. This performance is no exception. The girls are solid in their dancing. All members held their own and got a fair amount of screen time.

Looks like NCT U is set to take over the trot world by storm! I couldn’t help smiling and laughing at how serious they looked. Honestly, it took me a few times to watch it because I kept pausing to snicker in a corner. It’s great to see them do something so out of their comfort zone, and it’s more impressive that they nailed it. I’d also like to give an honorable mention to Celeb Five for their rendition of this song because those ladies were hilarious.

What were your favorite stages from last week?