LED Apple "Lets the Wind Blow" for Their Latest MV

LED Apple, of Startory Entertainment, is another one of those idol groups that constantly slips under the radar. Among countless other groups filled with pretty boys that can dance, sing, and possibly rap, the group is consistently being forgotten by K-pop fans. This isn’t surprising — all groups fall under the “out of sight, out of mind” liability, which even caused a new group, B.A.P, to come back four times this year, a move to cement themselves in the minds of audiences. Unlike many boy bands, however, LED Apple is more of a pop-rock group — think CN Blue and FT Island — and the members avoid extensive choreography in favor of standing behind a mic and rocking out on a guitar. Despite having only debuted int 2010, the group has already gone through many member changes and currently stands with five members:  Youngjun, the leader and guitarist, Hanbyul, the main vocalist and rapper, Hyoseok, the drummer, Kwangyeon, the bassist and supporting rapper, and Kyumin, the lead vocalist. Recently, the group has returned with their song, “Let the Wind Blow.”

If you’re used to music videos with bright colors, flashing lights, and constant dancing, LED Apple’s tinted MV will come off slightly depressing. It’s entirely opposite of the jovial, upbeat music video they released last spring, wherein the boys are wearing crisp white naval outfits and jumping along to the beat. This music video is dark throughout, as if taken at nighttime,  and in a place that looks like a dirty basement. Surprisingly though, the choreography isn’t very different from their previous music video — the boys are still doing disco-like poses and hip-thrusts to the beat. To be fair, there are only so many dance moves you can do behind a mic stand. Fitting with the music video’s darker theme, the boys sing into their mics with absolute despair and stare beseechingly at the camera. Hanbyul, the blond, does the best emoting, which might be why the camera focused on him most of the time. 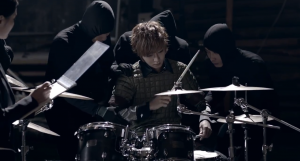 The concept of the MV is easy to follow: the boys are robots made to dance for a group of austere men and women in black suits and sunglasses. In the beginning, we see the boys carried into a dusky room and placed on stretchers, and into wheelchairs. Their limp bodies imply lifelessness. Very soon, we see the boys hunched over in front of mics, men swathed head-to-toe in black behind them. For the next half of the MV, the businessmen observe and puppet LED Apple. They smugly watch the robotronic LED Apple perform, one man even taking off his sunglasses. Then, they’re gone, and LED Apple is moving by themselves. They rise from their stretchers and begin to perform once more, this time with more vigor. Lights flash around them, revealing the cheap and poorly done setting, and at the end the man reappears to nod at them. What this means, I have no idea, because it’s shown a second later that Hanbyul is still a robot. 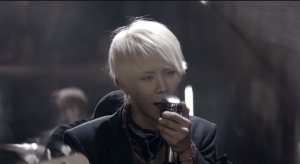 The idea for this music video is interesting but counterfeit. Foster the People did the same thing with their music video for “Houdini,” playing deceased idols who continue to be put to work through scientific means. Aside from that, there was clearly a lot of focus on Hanbyul throughout the entire thing. The other members got brief, often unfocused close-ups, but none got to emote directly into the camera like Hanbyul did. It was like Hanbyul was the star of this MV and the others were his puppets. Even worse, Hanbyul is following the most ghastly fashion trend to hit K-pop in recent years: shorts over tights. Bright orange tights, at that. Nevermind Kyumin’s dip-dyed bangs.

The song itself is catchy and nice to listen to. The yearning tone fits with the context of the lyrics. The song is about a man that pleads the wind to take him to wherever his beloved is, saying that he is in total despair and pain over the absence of his other half. But as pleasant as the song and lyrics are, I fail to see how the music video has anything to do with love. Instead of searching for a girl, we see the members turned into electronic rock stars. However, Hanbyul’s longing stares into the camera do resonate with the song and its meaning. It’s as if he’s pleading for someone to be returned to him.

I can just barely flow with the above theme, and so I’m unable to give LED Apple a good score on this music video, simply because it’s not their own. Foster the People had the idea first, and LED Apple copying it does not a good MV make. For this, the music video gets a score of a 1/5. 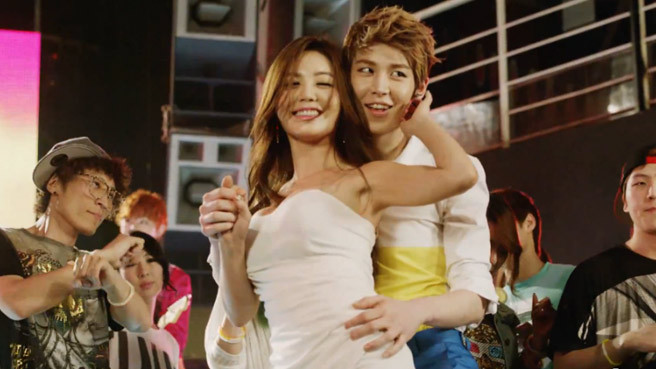 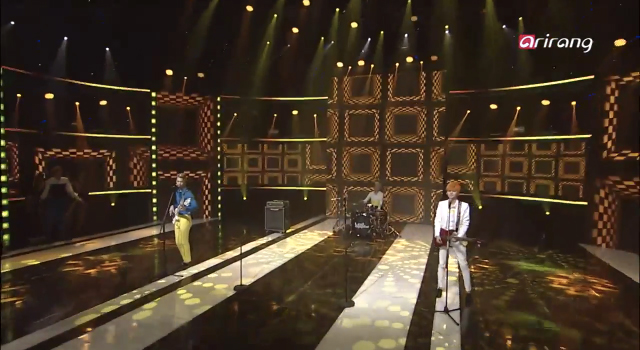