B12: A Spoof That Hits Too Close to Home

B12 has it all: twelve boys with distinct personalities, hip fashion, flashy dance moves, and a catchy song. They could be the next big thing in the boy band sphere… if only they were real. B12 is a group created by the American TV show American Dad for one of their episodes, but compared to the boy bands in the K-pop industry, they aren’t that far off from reality.

Watching the spoof B12 MV is like watching one epic mash-up of a bunch of K-pop boy band MVs. There isn’t any denying that the American Dad writers hit the nail on the head with B12, probably without even knowing anything about K-pop, which is the unfortunate part. The K-pop industry has become one big inside joke about huge groups with stereotypical members and MVs. Let’s make a comparison… 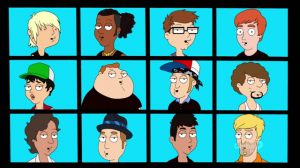 There are twelve members in B12 (obviously) and supposedly, each boy is to have a distinct and interesting personality. However, like in K-pop, there are a few who seem genuinely useful, the couple of stereotypes you just have to have, and then the filler members who everyone ultimately wonders: what exactly are they doing in these groups? There is the main vocal, because every group needs one solid singer to carry everyone along, which is painfully similar to K-pop groups these days. With Super Junior, the greatest 13 (or more) member boy band, some would argue that the group fulfills some of the points above. However, they’ve been lucky to have multiple good voices — a characteristic that hasn’t been very common in smaller boy groups. It says something about the industry, when the joke of a music group only having one good singer is so realistic. But given that this is the Korean entertainment industry we’re talking about, there are evidently other roles for members to fill. 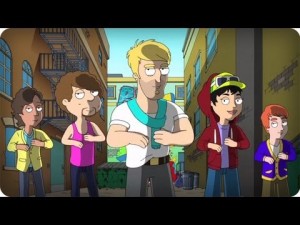 For example, there is the androgynous, effeminate character, something that B12 has adopted. Members of this variety come in all shapes and sizes but the highlight is their pretty-boy looks and gentle demeanor, à la Super Junior’s Sungmin, NU’EST’s Ren, and SHINee’s Taemin. These members are important because they make the international audience (unfamiliar with K-pop) ask themselves, is that a boy or girl? OK, maybe that isn’t why they’re important, but it certainly piques attention, and that has evolved into a significant aspect of forming groups. In B12, they toy with this theme by having one of their members cross-dress. Looking at K-pop, and by way of just one instance — Taemin’s consistent need to affirm his masculinity on variety show — B12 don’t stray far from a K-pop truth.

Based in a multinational and multicultural place like the US, B12 is crafted with just one Asian member, a Japanese. It’s also made sure that B12’s Japanese guy has his hair bleached for the group’s music video. Obviously, a comparison comes to mind and we picture the bleached blond hair on Asian boy-banders that has simply become canon, and internationally recognized. In K-pop groups with more than four members, which really makes up most of them, there is rarely a time when any of these escape being styled with some form of light-colored hair. In the real boy band industry, having different hair styles helps distinguish members, but to an outsider it may look like Asians simply wanting to have blonde hair. 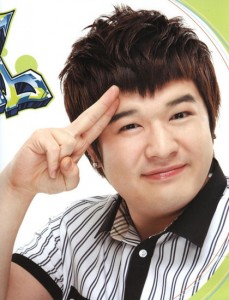 Playing off another feature, as seen in Super Junior, B12 has the one fat member, à la Shindong. There I said it, and you know you all thought it when you saw the B12 video. Sorry, Shindong. In the full American Dad episode they state that the fat kid is being the “relatable” member, which is probably true to some extent; a person with a less than perfect idol physique is more realistic to relate to. Shindong also plays the role of a humorous variety member for Super Junior, which may be similar to the role the fat kid would play in B12, were it a real group.

There is also a visual member, a member who doesn’t wear a shirt, and a pre-made romantic couple for fangirls to get excited about. Overall, B12 is so full of K-pop archetypes that it is almost painful to think about. How could a mainstream American TV show nail K-pop boy bands so well? One reason is that 90’s boy bands from the US are similar to K-pop boy bands of today. So, if the show based B12 off of those groups, it wouldn’t take a lot to compare it to its Korean counterparts. But more than that, the pop industry in every country is so predictable that it becomes easy to parody. In K-pop, there is a big emphasis on each member having their own specific talent or purpose and it would be easy to minimally research K-pop and still understand that aspect. 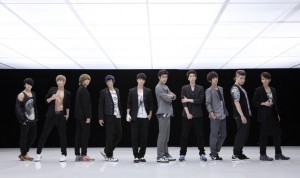 As for the “MV,” it is simply overflowing with K-pop references. Is that a room they borrowed from Super Junior? Pretty sure that is the same room “Bonamana” was shot in, so B12 must be sharing sets with SM Entertainment. But seriously, the MV shots are the same as the member profiles, over the top but not that far off from the K-pop boy band reality.

These are just a few examples of MVs with these aspects, but there are many more. K-pop fans often make fun of MVs for being shot in “boxes,” but the lack of originality in K-pop boy bands’ MVs is actually a serious issue at this point. Obviously, pure originality isn’t possible as everything is inspired by something else, but it would be in the pop industry’s best interest to diversify as much as possible to avoid being pigeon-holed so easily. 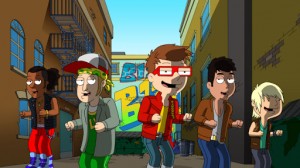 In the episode, B12 ends up going nowhere, promotion wise, because another group pops up with 13 boys before B12 can release their MV. This is a sad, but true, commentary on the plethora of debuts and lack of originality in K-pop groups, because as soon as one debuts, another may build on this to come out with another. The first group will fade into obscurity, because the second group does the concept better, or has a better production company who has more money for marketing. The B12 video is funny on the first watch, but on further appreciation and rumination, it appears depressingly easy for a sub-genre of music to be summed up in a two-minute parody. But I guess that’s life, and that spoofs and parodies can be cynical yet laughable at the same time; better to be popular and easier to be made fun of, than unknown and living on the edge of the entertainment circle. Well, boy bands, at least you have a little foot in in that sense.

What did you think of B12, Seoulmates? Are you ready to join their fan café? What should their fan name be?