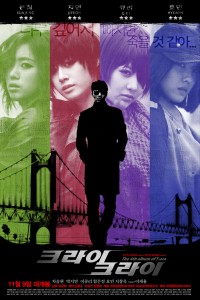 This week in K-pop saw a bunch of MV releases with T-ara, Son Ho-young, LED Apple, Woman Power, and Urban Zakapa giving fans some new viewing entertainment.  There were a couple of great performances from Simon D and Shin Young-jae of 4Men and MI on Yoo Hee-yeol’s Sketchbook. Running Man featured the talents of HaHa’s belly and did a double cross of their spies, SNSD raised pulses on an otherwise pretty tame appearance on Let’s Go Dream Team 2, and it was the beginning for a new batch of Invincible Youth.  What 5 Things happened this week in K-pop that I LOVED?  You know the drill, keep reading to find out what I thought was a bit more special than the rest.

5.  A K-Indie Gem releases new treasure
Urban Zakapa, one of the recently spotlighted indie artists in our weekly K-indie Gem series just released a new song and MV, “Miss the Spring.”   The song is from the nine member group’s first ‘official’ album 01.  The MV features three of their vocalists and the song and vocals are just awesome.  Looks like Urban Zakapa are well on their way to gaining some much deserved attention in the South Korean music scene.

4.  Thailand brings it to the Kpop Roadshow

The K-pop Roadshow Cover Dance Festival hit Thailand and the finalists there really brought the fiercest competition to the show yet  2PM had a tough decision as teams did covers of Super Junior, 2PM, SNSD, After School, Orange Caramel (with the group that had to be the happiest I’ve ever seen even though they didn’t make it to the next level), and Big Bang.  My faves were the groups that covered 2PM and Big Bang, but in the end 2PM chose the boys of Next School to represent Thailand.

I would have to say that the finalists in Thailand impressed me the most overall.  Thai fans also weathered the storm that rained on 2PM’s parade as they showed up in force to help the boys complete their mission.  The boys had to get 2,000 fans to attend their concert at City Hall, but torrential rains came and they feared they wouldn’t make it.  Not only did the fans brave the rains, they showed up almost 5,000 strong.  I hope the boys put on a great performance because that is dedication.

3.  Snow White and the LED Apple

LED Apple is labeled as an ‘idol rock band.’  I don’t care much for labels, for me it all comes down to the music and idol or not, Led Apple’s new offering “Boy Meet Girl” rocks.  The MV reminds me of a futuristic take on Snow White where the beautiful newcomer captures the heart of the prince and incurs the wrath of the queen who poisons her into a tragic slumber.  That’s just my take on it–the MV is well done, something different, and goes well with the song.  LOVE it.

2. The return of Invincible Youth

Invincible Youth Season 2 debuted this week with the new cast of Sunny and Hyoyeon from SNSD, Suzy from miss A, f(x)‘s Amber,  Ji-young from KARA, SISTAR‘s Bora, Woo-ri of Rainbow, and Ye-won of Jewelry.  The hosts of this season are Lee Su-geun, Boom, and actor Ji Hyun-woo.  The show got off to a good yet slow start, but I’m hopeful it will improve as the girls get to know each other better.  I was disappointed that Suzy was missing for most of the episode and that they brought up the ‘is Amber a boy or girl’ thing–ugh, really? Sunny is hilarious as usual and it was great to find out that Ji-young and Ye-won are pretty hilarious and outgoing too, even though they are among the younger members.  My fave part of the show, other than the multiplication game they played which showed why a lot of them are in show biz, was the bit where  some of them learned how to enjoy eating fresh octopus, really fresh octopus.

The hype over T-ara‘s new MV for the song “Cry Cry” off of their fourth album had been building ever since news hit that it would be starring hunky ajusshi actor Cha Seung-won among others and be like a mini drama.  Well, I’d have to say it lived up to the hype–loved it.  I’m super glad that T-ara is back to singing good, solid songs like they did when they debuted instead of all the gimmicky concept ones they had been doing as of late.

Those were the 5 Things I LOVED in Kpop This Week, were they yours?