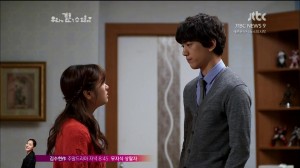 We’ve made it past the midway point of November and only have a few more weeks until the end of 2012, where has all the time gone? The past week in K-pop kept us busy as Park Jung-min makes a “Beautiful” come back, Dal Shabet said “Hate, Don’t Hate,” Thai singer Natthew makes an impressive debut in Korea with “She’s Bad” featuring BEAST‘s Jun-hyung, Infinite‘s leader Sung-gyu makes releases his solo debut album and the MV for its title track “60Sec” which stars L, DBSK release a teaser for their upcoming song “Humanoids” (I knew Yunho was too perfect to be human), Son Dambi makes her long awaited return “Dripping Tears,” SPICA teases with “Lonely,” SHINee also released a special trailer for their newest Japanese venture “1000年、ずっとそばにいて・・・,” Juniel will make a come back with a “Bad Man,” EXO-K and Samsung urged everyone to Create Your Smart Style, C-Clown worries “Because You Might Grow Distant,” B1A4 “Tried to Walk.” and who knew it was soo hard to get married in the ROK?  Well, I think most K-drama fans had an inkling.

The following are the 5 Things that happened in K-pop last week that I think were just a tad bit more special than the rest.  If you’re not up-to-date with your K-pop and tend to get your undies in a bunch because of spoilers turn back now, because spoilers most likely will ensue.

5. Revenge of the Stylist

They made Hwang Jung-eum look like the most unstylish stylist ever, Noh Min-woo look like Jack from The Nightmare Before Christmas and Park Ki-woong–well he’s adorable, but in spite of everything I’ve finally warmed up to Full House Take 2.  The story is actually more like a second take on You’re Beautiful minus the whole gender bending thing in my opinion though.  It’s been a bumpy ride, predictable and far from perfect, but somehow they got me to care for the characters so there’s something good there.  In this clip, Jang Man-ok (Hwang Jung-eum) takes out her frustrations of dealing with three superstars on Tae-ik’s (Noh Min-woo) flower beds and when she gets caught red handed tells him she was making way for a vegetable garden since he likes organic vegetables so much… suuure, Man-ok.

With a rousing intro by will.i.am, PSY took to the stage for the closing performance of the 2012 American Music Awards.  We all knew a special guest was going to join PSY, but who could’ve guessed it would’ve been MC Hammer with a mash up of “Gangnam Style” and “2 Legit 2 Quit.”  If you were around when Hammer ruled the world in the 90s you’d know just how amazing it was.  PSY must’ve been a big fan because he had said that praticing for the stage hadn’t been hard because he’d been practicing Hammer’s moves for twenty years.

Yoo Hee-yeol’s Sketchbook seem to be on a roll as of late with the last couple of episodes being packed with stellar performances.  The guests this  past week included Epik High who among other things did a great medley of their new and old songs, Primary featuring Zion T and Dynamic Duo, Ailee with an awesome rendition of “Girl on Fire” and an ambitious–but slightly less successful rendition of GD‘s “Crayon,” and LEDApple singing their wondrous new song “Let the Wind Blow.”

2. Shinhwa, Ballet and Thighs of Steel

On the latest episode of Shinhwa Broadcast, the members get some ballet lessons from some top Korean ballerinos with hilarious results… did you expect any less from Shinhwa? And I have to say I didn’t expect it, but Hye-sung was the least graceful of them all.

1.  Playing with Water on Running Man

When I heard that Lee Seung-gi would be on Running Man, I expected nothing short of greatness from the episode.  I wasn’t disappointed as Park Shin-hye also joined the cast in a hilarious episode filled with water games in the middle of a South Korean Winter?   The whole episode had me in stitches and I earnestly look forward to its continuation next week.