The "Midnight Sun" Sets on Beast

After teasing us for over a week with songs, pictures, and music video teasers, Beast has made their comeback a year after releasing their last album, Fact and Fiction. As you may remember, Beast’s last album won much love and praise from us here at SeoulBeats, even earning the Album of the Year award. The same can’t necessarily be said for Beast’s newest album, which admittedly has a lot to compete with so far this year in terms of musical quality. Likewise, their comeback music video for “Midnight Sun” leaves a lot to be desired.

[youtube http://www.youtube.com/watch?v=ckIGhwQtd-c]Beast’s music video for “Midnight Sun” doesn’t have complexity or an underlying meaning or emotional value — it’s simply a colorful, upbeat, party MV that involves a lot of strutting and hopping around on Beast’s part. The boys don’t even dance, instead opting to do a lot of “swag” moves, strut, and awkwardly hop around. The cinematography does its best to capture a lively atmosphere and to be perfectly honest, the city looks lovely. Perhaps it was a good idea to choose New York City as the film site, the urban setting and graffiti’d walls oddly making Beast’s fashion look less deplorable. Beast’s styling in this MV is definitely some of their worst, from Kikwang’s fried blond mohawk to Dongwoon’s pimp-suits to Hyunseung’s pink blazer and floral shorts. Pink with red hair. What 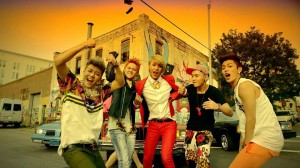 were his stylists thinking. But luckily for Beast, the fun atmosphere and bright setting worked to their advantage, and they didn’t look too bad. If anything, their colorful outfits added to the music video’s fun, summery vibe.

The MV’s main problem is its lack of consistency. The whole thing felt a little strung together, the different scenes not doing anything to create a storyline or really embody anything at all. One moment, the boys are walking down a sunny street, checking themselves out in windows and dancing a little as they go. The next, they’re standing atop dumpsters in graffiti’d alleyways. Then, they’re hopping about, in front of a car and a crowd. Later on, they’re hopping in front of a crowd again, but this time at night, with fireworks going off in the background. Before the MV ends, there are shots of the boys sitting in a car, doing nothing besides looking good, and then walking down a street together in slow-motion. The only real purpose the MV had was to make Beast appear as cool as possible. 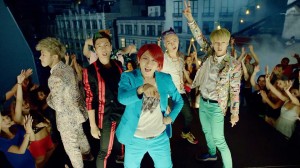 Another problem the music video had was Beast. Beast, for all their talent, weren’t emoting very well in this MV. Even their jumping and rocking out felt halfhearted, even awkward. The crowd did a better job at conveying a party scene than they did. Beast just looked out-of-place in every party scene, one boy taking the lead and the others not sure what to do behind him without choreography. Hyunseung was the most amusing, but only because he’d do weird little dance moves during the group scenes. Seriously, watch him.

One last thing to note was the large amount of white women. It was like Beast was singing to a crowd purely made of white women, with some men of different ethnicities riding bikes or dancing. This isn’t all that surprising, considering Beast’s racial scandal a few weeks back, putting out an advertisement for Caucasian women only to play the part of party-goers. There are some non-Caucasian women in the crowd, however.

For having no plot, no complexity, no consistency, and nothing that could’ve make this video more entertaining, Beast’s “Midnight Sun” MV gets a 1.5/5.