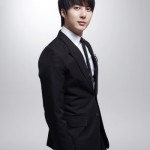 SS501‘s Kim Hyung-jun released another solo mini-album earlier this month, Escape, with title track “Sorry I’m Sorry.” During his year gap between music releases, Hyung-jun has been busy with two dramas–KBS‘ Glowing She and SBS‘ I Love You–and his ongoing gig as a radio DJ on SBS Power FM. But the multi-talented man still found time to release a solid mini-album with S Plus Entertainment. Check out the music video for his title track below:

The music video begins with a woman very clearly rejecting Hyung-jun by forcefully removing his hand from her arm. She proceeds to walk to away. Already, there’s a very strong theme of heartbreak and potentially betrayal. The haunting vocals and piano along with the gloomy rain and smoky environment adds to the theme. The fifty second opening has very different music from the actual song, and the change is a tad bit unexpected and even jarring. At the beginning of the video of the actual song, Hyung-jun continuously tries to get the attention of the woman, clearly trying to talk to her while she rejects his advances.

There are also scenes where the woman is blindfolded, but those seem unclear, at least initially. In later scenes, the woman is scene reaching out with the blindfold, trying to find Hyung-jun, but he has left. There’s clearly some discord that is supported by the lyrics of the chorus; “Sorry I’m Sorry” seems to be the apology of the woman towards Hyung-jun for what most likely is a type of betrayal. Although she doesn’t want to talk about what has happened, she still expects him to be around and forgive her, as shown by the blindfold scenes. But he has had enough and leaves. More lyrics reveal that the issue was with the lies and false pretenses put up by the woman that Hyung-jun is unwilling to deal with any longer. 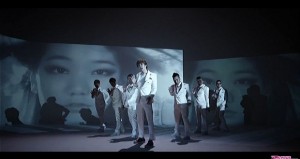 The music video uses three sets for dancing and at least two more for individual and couple scenes. A white-gray set has happy images of the woman playing on the projector in the background in an ironic way to show those happy times that perhaps weren’t actually so happy on both sides considering the actions of the woman. This is the only set where Hyung-jun is wearing white, perhaps to mirror those lighter times. Another set is the insides of a brown-themed room, one that brings to mind SS501 “Love Ya” days. It’s very dimly lit, and Hyung-jun and his dancers appear in black suits, adding to the gloom of the setting. Immediate scenes reveal the room to hold memories of the woman who appears in white clothing, directly contrasting the black of the now. The last dance set has very linear construction in the background, reminiscent of trees. Water is on the ground, and the black suit is retained. The resulting effect is very cool, placing Hyung-jun as being lost because of his newly found situation. This scene, like the others, is also very dark and dramatic. All three sets do a very good job of keeping in line with the theme and spicing up the video with multiple areas.

Of the drama scenes, there’s one where Hyung-jun tries to corner the woman into a discussion or argument. It looks like it potentially takes place in the same brown-themed area as before. Same happens with the scenes where the woman is blindfolded. Additional scenes have both Hyun-jun and the woman in darkness save for one light that shines on them both. In those scenes, it seems as if the woman is unaware of Hyung-jun’s presence, indicating that he’s seeing her in a new light but she doesn’t know that he has. Around the 3:30 mark, there is also interesting symbolism with Hyung-jun’s hands burned while the girl is giving off ashes or dissolving into them. This plays back to the theme of being “burned” by a relationship and how Hyung-jun intends to forget her, burn those memories of her so he doesn’t remember anymore. 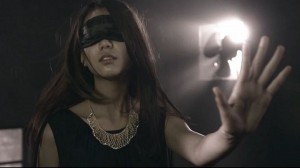 All in all, the music video does a good job of conveying the message of the music video and showing development throughout. However, some of the acting leaves much to be desired. Hyung-jun portrays his parts fairly well, but the actress seem rather blank in all situations. While it would be appropriate in scenes where she’s unaware of what is happening or is trying to play things off coolly, it’s not fit for when she’s pushing someone away angrily. It’s a case of where her actions are sufficiently emotion-filled, but her face doesn’t follow through.

The styling is mainly kept to suits with various necklaces for flair. It plays up a cool demeanor of a guy ready to leave because he’s had enough. The hair styling is also good, for the most part. There is that one hairstyle where hair is gather on the top and smoothed down on all sides that must be banished: Kim Hyung-jun is not a poodle, and he should not try to look like one. The girl is kept to simple dresses that keep in with the black and white theme. The choreography is also fairly simple; moments that utilize the full range of dancers are few.

The video speaks to complications within relationships and how much a person can go through before they’ve had enough. Hyung-jun displays mental grief and difficulties with dealing with what someone he loved did, which knocks the intellectual issues up a notch in comparison to normal love songs that saturate the K-pop sphere.While Hyung-jun is undoubtedly a good singer, emotional expression vocally seems to miss the mark by just a little bit, especially in comparison to the devastation and unhappiness he shows in some parts of the music video. 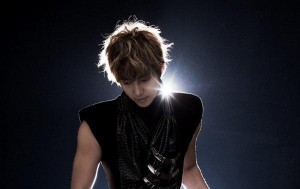 Kim Hyung-jun does a good job of incorporating drama scenes into the music video, especially with the slower motion of the drama contrasting with the faster-paced dance, so he earns a 3.9/5. It’s a music video with actual plot that runs through the mental state of a man suffering from betrayal. Downsides are in the weaker choreography and acting in parts of the music video. But taking in consideration all factors, the music video is a strong one.

Seoulmates, what are your opinions on Kim Hyung-jun’s comeback MV? Leave a comment with what you think!