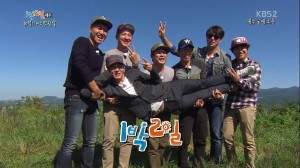 As we come to the end of October, the end of the year year 2013 also quickly approaches.  Where has all the time gone? Last week we saw, farewells and reunions, the end of love and the beginning, and more K-pop, K-drama, and K-variety goodness to fulfill all of our K-pop needs.

The following are the 5 things in K-pop that happened last week that I think were a bit more special than the rest. If you are not up-to-date with your K-pop and don’t like spoilers, turn back now or forever hold your peace,

It was an epik battle between YG entertainment’s two male trainee teams to win the right to debut. And while some of us might not have liked the mode chosen or agreed with the outcome–there is one thing that can’t be denied–both teams were deserving of the opportunity.  Congratulations Team A.

tVN and the producers of the sequel to Reply 1997 appear to have another hit on their hands. While I’m not loving Go Ara‘s character in Reply 1994 as much as I did Eun-ji‘s, I can feel it coming.  What the show is successful at is creating another story filled with the aspects that made Reply 1997 such a hit: real relationships that reflect the good and the bad, family, friendship, love, humor and a fond look back at life. Reply 1994, isn’t trying to be another Reply 1997 and that’s why it succeeds.  Here’s a clip from the show–is there anything worse than having your honest confession of love mistaken for an April Fool’s Joke? Talk about bad timing.

2. Reunited, and it feels so good

My first K-pop boy band love was SS501 and to see all five members: Kim Hyun-joong, Heo Young-saeng, Park Jung-min, Kim Kyu-jong and Kim Hyung-jun on stage after the three years since their not-a-break-up was a sight to bring tears to a jaded Triple S’ eyes.  All the members gathered at Heo Young-saeng’s concert this past weekend which was his last before entering the military this Thursday on October 31st.

The cast and crew of 1N2D said goodbye to maknae Joo Won, who is leaving the show due to his busy schedule, on a fun filled trip to Jeju Island. During a talent show that they had with fans they met on the island Lee Su-geun and Joo Won helped one guest with a very special surprise for his girlfriend.