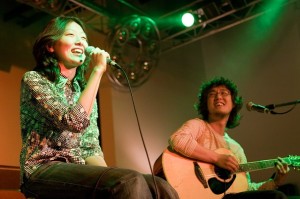 Welcome to another K-pop Indie Gem! This week’s highlight is Sogyumo Acacia Band, also known as Small Acacia Band. The band is a duo made up of Kim Min-hong and Song Eun-ji, both of whom are regularly involved in the guitar and vocals of their music. The duo debuted in 2004 with an eponymous first album as part of indie label Pastel Music‘s lineup, striving forward with their folk indie flair. The group has released a total of five albums [Sogyumo Acacia Band (2004), Lips Are Moonlight (2006), We Are Sogyumo Acacia Band (2007), Ciaosmos (2011), Slow Diving Table (2013)] one concept album [Seven Days (2008)], and has participated in other tracks, each staying true to the more mellow tones of the duo while incorporating some of the evolving electronic influences.

Also interesting to note is the band’s participation in the 2010 documentary, Sogyumo Acacia Band’s Story, which covered the duo’s struggles in finding their direction in music. After coming into popularity, the band set out to develop project groups with freelance musicians and singers, the most outstanding of which is the singer Yo-zoh, who gained far greater popularity after working with Sogyumo Acacia Band for her debut album My Name is Yo-zoh. However, after working with the singer, the duo began to doubt the type of musical direction they had taken, wondering if the music they had made was the type they’d intended to make in the first place. The thought process was unveiled in the documentary, revealing the two’s concerns about their future in music.

What’s most noticeable about the duo’s music is the progression from a more typical folk sound to one mixed with electronic sounds through album development. Regardless of the change in instruments used, the typically soft overtone remains, as do the similar styles of vocalization.

First up is “Lalala” from Sogyumo Acacia Band. The song is on the slower side, very free-spirited and based on content and finding something enjoyable in the minimum presented. None of the music is invasive; rather the beats are slow and thoughtful, leaving plenty of room for your own thought to supersede the music. The lyrics are few and said in a sing-song manner rather than melodically, adding a sense of childlike thought or innocence to the song.

Also from Sogyumo Acacia Band is “S,” bringing you one of the funkier beats of the album. It’s faster than the other tracks but still keeps in line with the same smooth sounds. In contrast to the previous song from the same album, “S” features heavier beats and a more upbeat rhythm. It uses a more varied instrumental and introduces almost wry vocals to complement the clear differences. Both this song and previous represent two ends of the spectrum for the album’s sounds, showing the variation that the duo intended to bring and eventually explore in their music, making a single description hard to pinpoint for the group’s overall sound or capability.

“Sad Love Song” from Lips Are Moonlight takes on a distinctly haunting and gloomier mood, appropriately complementing the song title. The air is of greater maturity than in the previous album, successfully conveying a different attitude altogether. The track maintains the qualities that made “Lalala” distinct, such as the thoughtfulness and Song Eun-ji’s breathy but clear vocals.

Again presenting contrast is “Also Looking Back” from Lips Are Moonlight. The track continues the haunting theme with its twisted melody and wavering vocals from Kim Min-hong. The repetitive chorus makes the track seem longer than it is and helps create the feeling that the song is just going in circles.

From the duo’s third album, We Are Sogyumo Acacia Band, is “The Girl Is an Adult.” The song starts off with girlish singing that gives way to male vocals and their quiet reminiscence. In a similar manner to this song, Sogyumo Acacia Band’s third album provides refined simplicity, using ambient noises to prolong the song’s effects without disturbing the song as a whole.

Ciaosmos overall has several feel-good songs with glimpses of future experimentation in a few other tracks, “23 Red Ocean” being one of them. It employs the same guitar usage as in other songs, but the start, heavier beat, and surprise inclusions all suggest exploration for a larger library of usable sounds.

Last on my list is “I Saw the Story” from Slow Diving Table, the duo’s fifth album and quite possibly my favorite of theirs. The entire album incorporates modern city sounds in the songs, distorting the overall sensation. They also demonstrate a clear evolution from their debut days. While it means more processing and less of that raw flavor that their earlier works had, it doesn’t make the results any less enjoyable. “I Saw the Story” in particular is set over the sound of rushing water and provides layered vocals to enhance the levels of the song.

Sogyumo Acacia Band’s ability to create simple but interesting songs has served them well. Several of their songs are great for sitting back and enjoying the interplay of sounds while their newer tunes have shown promise of a smooth transition into more experimental avenues. The duo has been around for a while and is clearly experienced, and their music is definitely something to look out for.