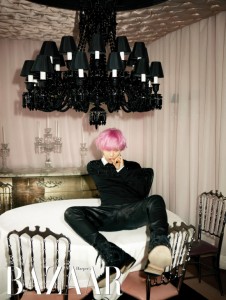 We’re half way through summer, so what hot things did K-pop have in store for us last week?  Gong Yoo sang “Because It’s You” for the Big OST, Beast came back colorfully with a “Beautiful Night,” the Wonder Girls groove  “Like Money,” SNSD‘s Hyo-yeon came in second on Dancing With the Stars Korea Season 2 although I think she had the night’s best performance, rookie groups abounded with 4K releasing “Moonlight Sonata,” Crayon Pop getting down on “Saturday Night,” GLAM releasing “Party(XXO),” and C-Clown going “Solo,” PSY released his song “Korea” which is the country’s fight song for the Olympics, although not resolved–the MBC union strike was finally called off after 6 months, SM Entertainment teased us with the trailer for To the Beautiful You, BoA released the dance version MV of her self composed track “Only One,” VOGUE Korea did an awesome photoshoot of their list of the 12 greatest male actors in Korea, we saw the end of I Do, I Do, Ji Hyun-woo shed tears at his last fan meet before entering the military on August 7th, hundreds of fans as well as SS501 members Kim Hyung-jun and Heo Young-saeng saw off Kim Kyu-jong as he enlisted, during an interview in Japan Kim Hyun-joong said he now needs to think carefully before going to a public sauna due to the increase in male fans?!, G-Dragon joins Twitter and gets over 300,000 followers in 48 hours, and there was the fan service by Jong-hyun and Taemin  heard ’round the K-popiverse–whoooee.

What 5 Things that happened in K-pop last week did I think where a bit more special the the rest?  Keep reading to find out and as always– if you’re not up-to-date on your K-pop turn back now, because spoilers will most definitely ensue.

Running Man‘s Olympic special got off to a fiery start as the Running Man cast challenged a team of idols including SuJu’s Eunhyuk, Beast‘s Doo-joon, ZE:A‘s Siwan, MBLAQ‘s Lee Joon, 2PM‘s Nichkhun, C.N. Blue‘s Yong-hwa and T-ara‘s Eunjung. It was a fun episode as the teams competed in various versions of Olympic sports like relay races, the high jump, and volleyball. At the end, it was back to good ol’ Running Man ‘hide and seek’ with a twist–the hunter would become the hunted after a certain period of time and it continued back and forth until there was a last man standing.  It put a great spin on the usual game and was a lot of fun– I can’t believe Yong-hwa was the second idol to get taken out, ususally he’s one of the best players on Running Man.  Here’s a clip from their volleyball game segment in which Lee Joon proves that playing around too much is not a good thing.

4. The Brown Eyed Girls sing of One Summer Night

I’m glad the teaser for the song which featured some kind of electro pop shock were just that–a tease.  The Brown Eyed Girls released a single to tide fans over until their next comeback and released the MV for “One Summer Night.”  Love the song and story of the MV.

The audience for the latest episode of Yoo-Hee-yeol’s Sketchbook were in for a treat as Jang Kiha and the Faces, Hot Potato, Nell, Jang Phil-soon, and rookies Big Star put on performances.  All were in top form, but it was Nell’s performance of “Promise Me” that got my love.

2. Big is almost over

Last week’s episodes of the K-drama Big had some of the best and also some of the most frustrating moments of the show. Which had me both crying and yelling at the screen during the hour.  All the ‘big’ secrets are out and we get to see how everyone deals with it all whether it be through blind selfishness or noble stupidity.  Not gonna lie, I have been disappointed with the story line which has lagged terribly in spots and some of the side stories have been so irrelevant which is unusual for a Hong Sisters’ drama.  But I think Gong Yoo has done an excellent job in the role and while I didn’t love Lee Min-jung‘s character all the time so much, I still love her.  Here’s one of those scenes that had me both crying and yelling at my laptop in noble-idiot-induced-rage.

1. Hyori proves her worth

Lee Hyori guest starred in the k-variety show Show Me the Money, where underground and rookie rppers are paired up with their industry sunbaes to help them get a foothold in the industry–think K-pop Star for rappers.  In this episode of the show six of the contestants got to work and put on a performance with Hyori.  My fave performance of the set would have to be Hyori’s performance of  “Chitty Chitty Bang Bang” with with female contestant Kim Eun-young. Although I’m totally biased I would have to say that Hyori was in top form for the show.  After the whole scandal from her last album she had been laying pretty low on the K-pop scene, but it’d would be great to see Hyori come back soon.

Those were the 5 Thing I LVOED in K-pop last week, were they yours?