Boyfriend Adds Some Style to Their Love

Up-and-rising group Boyfriend recently made their comeback with their first mini-album, Love Style. With summer finally here, it was no surprise that the boys decided to promote such an upbeat track, complete with pastel colors and choreography to match. Boyfriend, while perhaps not known for having the most musical finesse, always delivers on the cuteness scale.

In the music video for “Love Style,” Boyfriend seems to have returned to the concept they had for their debut single, “Boyfriend.” They had simple choreography, accented by each member’s personality, and dressed in light colors suitable for the summer. Boyfriend also seems to love Doc Martens for some reason — those shoes appear in every single one of the music videos — which makes me think wonder if they’re wearing insoles. Beyond the light fluffiness on the surface of the music video, it’s clear that Starship Entertainment basically just wanted to make the boys seem appealing, which they executed very well. Boyfriend is great at playing up the cuteness factor — it practically bleeds through their music — and “Love Style” is no different. I mean, I could feel my noona-crush on Min-woo (who is practically an entire year younger than me) returning just watching him shoot charming smiles at the camera. 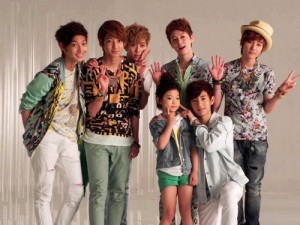 Unfortunately, their fashion in the music video was an obvious miss. I don’t know why the stylists thought it was okay to put the boys in floral print (in extremely feminine colors, nonetheless), but it was a bad, bad idea. Also, jumpsuits are never okay, and Starship really jumped the gun on that one. Perhaps the most masculine piece of clothing in that entire video was Jeong-min‘s sky blue plaid jacket with three-inch long metal spikes all over the shoulders and sleeves. But even that was marred by the apparent Bejeweled shirt he had on under it. Luckily, the boys changed into different outfits for the second verse, but the obnoxious floral print was still present with a light blue jumpsuit worn by Dong-hyun and Jeong-min‘s button-down shirt. However, the clothes Young-min and Kwang-min had on, especially the tribal-print shirt, as well as Min-woo’s pants, were less serious fashion felonies. It was a little bit different and less, dare I say it, feminine. The outfits the members donned in their individual shots were also much better, since they stuck to stripes and darker colors. 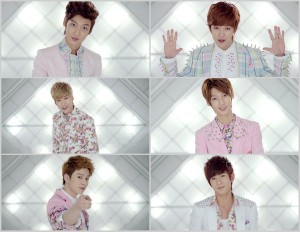 The choreography for “Love Style” was disappointing, because Boyfriend has impressed before with much more distinct and original choreography in “Don’t Touch My Girl” (along with their style). Boyfriend managed to hit a good chunk of the essentials in K-pop choreography (as told by Paloma here in her article), including the “drool-wiping” and “hip-swiveling.” But the choreography just didn’t flow and fell short of creativity, as the boys basically recycled dance steps from routines that fans had seen before. The jumping sequence in the video was something that had already been done by well-established groups, such as SHINee and MBLAQ, so that wasn’t anything new. The only part of dance that really stood out was when they did individual poses toward the end, because at least that brought something a little different to the table.

“Love Style” itself isn’t a bad song; with its upbeat tone and catchy chorus (“Na na na, we’re high!”), this track is right up Boyfriend’s alley. They bring a fresh energy to the song that other groups would probably have difficulty pulling off, so it’s a great track to blast during the summer. The rapping part impressed me quite a bit, as I haven’t really thought about the rappers in Boyfriend as strong ones, but it seems like they have improved a lot since their last track. The vocals were also pretty much immaculate, and each member held their own onstage. 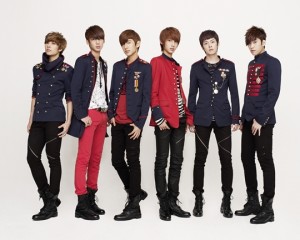 Most fans got the impression that Boyfriend was going to embrace a more masculine image after the release of their previous single, “Don’t Touch My Girl,” but now it definitely looks like they’re planning to stick with the cute concept for a while. It’s disappointing, because to be honest, the boys pulled off the image they had in “Don’t Touch My Girl” much less awkwardly than their image in “Love Style.” With Min-woo now looking less like a sixteen-year old, I’d say that Boyfriend has the potential to move on to darker concepts with more angst in a year or so. Meanwhile, we’re just going to have to hope that they don’t work this overly happy, almost sickeningly adorable image of theirs to death before they get there.

Most Boyfriend fans seem pretty happy with “Love Style,” but Starship could have done so much more with the group instead of throwing them in some outfits that barely passes as clothing meant for boys and having them perform a mediocre routine. Overall, “Love Style” isn’t much of a step in terms of progress for Boyfriend, but it’s clear that the group has a lot of potential that they’re just not tapping into yet. And by potential, I don’t mean Min-woo’s abs.