Seriously, It's Time to Lay Off Krystal 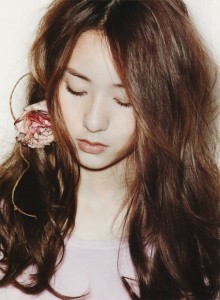 Krystal is one of the most popular — if not most popular — members in f(x), but her rep with casual fans and non-fans is not the best. The very first time she was “caught” being “rude” was when she zoned out during an interview and looked disinterested. The second time is the above mentioned incident on “Kiss & Cry.”

Third time’s the charm, it seems: recently, certain outlets have been making an unnecessarily big fuss out of Krystal looking “rude” and reacting badly during an Mnet interview. In the sit-down interview on the day of their comeback with Mnet, one of the VJs asked Krystal whether or not she was “two-faced,” which as we know, is a question we always ask anybody and a question we should always expect a happy and glossy-faced smile to. Duh!

Needless to say, Krystal was slightly taken aback before Luna and Victoria jumped to her defense to insist that she is not. Shit stirrers everywhere have taken Krystal’s “slightly taken aback” response to mean that she is the rudest bitch alive and that she must jump to her own death lest she spread any of her rudeness disease cells to other poor, unsuspecting people.

Having watched enough of f(x)’s interview footage throughout the group’s career, I can say that Krystal is not the best interviewee. She can seem not very involved, not very responsive. Sometimes her answers to questions are a little flippant. But those are regularities for any idol who has to do hundreds of mindless, superficial interviews. But because she’s a girl and because of that one incident where she was being “rude,” she’s going to be called rude for her entire career, and that’s unfortunate.

It’s also unfortunate that casual fans and non-fans who only very vaguely know Krystal from her f(x) activities can so easily criticize her for being rude, and so ruthlessly react with hostility the moment she steps a tiny bit out of line.

Who asks someone if they’re two-faced, even in jest? Who’s not supposed to be taken aback by that question? To expect Krystal to react positively is ludicrous, and to criticize her for not responding with fervor is harmful, particularly because Krystal is a female idol. That’s the invisible expectation: that females are supposed to swallow up anything that’s thrown their way with grace, and if they don’t respectfully act with glee, sincerity, or anything that’s even slightly happy, she shall be deemed undesirable.

Female idols are constantly asked questions that would never be asked male idols. They’re constantly asked to prove that they’re pure, innocent, ideal, and are put down and made fun of the instant they’re not. They always have to be happy, respectful, aware. They have to relent to situations and possess an array of unattainable qualities that would never be asked of a male idol.

At this point I’d be beating a dead horse to repeat this, but it’s astounding how very much male idols get away with, and then on the flip side, how willing people are to intentionally misinterpret the “negative” actions of female idols even when evidence suggests otherwise.

I get it, sometimes you just don’t gel with an idol’s personality and she happens to be a girl and she just rubs you the wrong way, no matter how little or much she does. It happens. And that’s fine, but it’s extremely important to recognize that we’re taught to be more critical of women in general, and to mete out harsher punishment for perceived wrongdoings than we do for men.

It’s also important to recognize that K-pop is an extremely magnified entertainment sphere, where everything thing and non-thing is captured on film, camera, phone and will be picked apart, and female idols, actresses, entertainers often get the short end of the stick for literally everything. They need to do more to please the crowds, yet have to do very little to be blacklisted in the eyes of bystanders and non-fans.