A Recap of TaeTiSeo's Fashion

SNSD’s sub-unit TaeTi Seo, comprised of Taeyeon, Tiffany, and Seohyun, may have already said their goodbyes but I’m far from done with them. The sub-unit has already been discussed on SeoulBeats and agreed to being a success with good songs, great vocals, and good stages but what hasn’t been discussed yet is the clothing. Yes, the clothing. To go with their confident title song, “Twinkle,” TaeTiSeo had a starlet sort-of-concept, wearing a variety of outfits that screamed “I’m a star.” The concept fit the song and most of the members well. I personally think the concept suited Tiffany wonderfully but Seohyun still needs to work on being less wooden onstage. The outfits weren’t always consistent, sometimes having more edge and other times being more girly. Tiffany usually wore pink, Taeyeon yellow, and Seohyun blue or white, but other times they girls would wear matching outfits. For the most part, I loved the outfits and how they embodied a feminine, confident look and would switch from cutesy and girly to mature and sexy depending on the stage, but there were some outfits that I did want to burn. 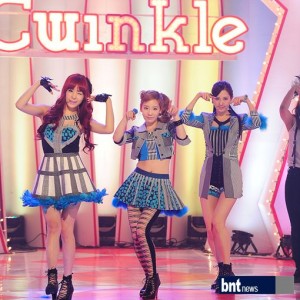 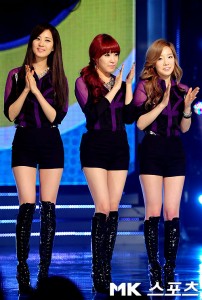 Let us begin with the outfits they debuted in. The blue-white-and-black striped outfits were seen in the “Twinkle” music video and automatically earned a place in my heart. Made matchy through the color scheme and pattern, each outfit suited its wearer perfectly and embodied different amounts of sass. Girly-girl Tiffany wore a dress with a feathered hemline, spunky Taeyeon wore a crop-top, pleated skirt, and slitted black leggings for an edgier look, and prim-and-proper Seohyun wore a long blazer, making her look more polished. The feathers on the outfits made them appear more diva-like and glamorous without making them gaudy. Their next outfits, worn for their “Baby Steps” stage, were more similar to what SNSD is known for wearing: micro-shorts and shiny patent over-the-knee boots. They matched entirely but not in a bad way. The girls looked stunning in these outfits as well, appearing more mature and sexy than they did in their fun feathered getups. The sparkling jewels around their necks added glamour and the tucked-in blouses emphasized their amazing figures. 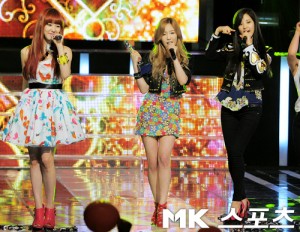 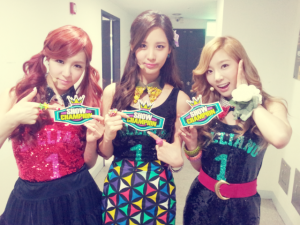 Other outfits weren’t as matchy as the first two. The first set on the left, worn for a variety of stages, don’t match at all. Tiffany wears a fluffy printed dress, Taeyeon a slim-fitting mini-dress, and Seohyun pants and a jacket. The girls were meant to look more rock-and-roll with these looks but it fell rather flat. Seohyun’s outfit has the most edge to it but her blouse is unattractive and her shoes do not match. Taeyeon’s dress was ugly, having a groovy 60s print on the front and a solid nude back without any prints at all. Tiffany’s dress was the most forgivable, despite the very cheap-looking belt, but was also the most out-of-place. She looks especially girly next to Taeyeon and Seohyun’s tougher outfits. Their sparkling outfits were some of my favorites, however. I love their cute little detached collars and glittered blouses, but the flowers were an odd touch. 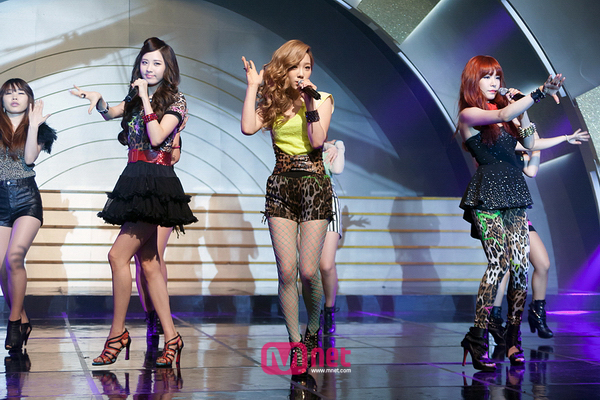 Another set of outfits they frequently wore were their leopard-printed outfits. For these, Seohyun wears a frilly black skirt (which looks the exact same as the skirt Tiffany wore for the glittered outfits), red belt, and leopard-printed top. She looked feminine and pretty in this apparel. Tiffany’s outfit was cute and at the same time unappealing. She wears leopard-printed leggings and an extremely short dress that barely covers her crotch. The back part of the dress is longer, covering her behind, but it still looks like Tiffany put on a long top and forgot to grab a skirt on the way out the door. Her red collar was a cute touch, though. Lastly, Taeyeon’s outfit was my favorite. It was the most tomboyish with her leopard-printed suspenders and neon shirt and fishnet tights. The outfit was fun, edgy, and youthful and fitted Taeyeon wonderfully, much better than pseudo-cheerleader outfits ever did. 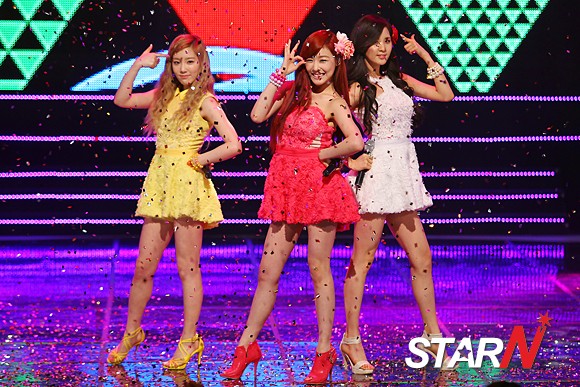 Not all of TaeTiSeo’s outfits were interesting and fun. Some were downright boring, like the floral dresses they wore to one of their fansigns and to one or two performances.  Dressed in solid yellow, hot pink, and white dresses with floral appliqué throughout, the girls’ outfits were cute and extremely feminine but bored me the most out of all their outfits. They were also extremely short, which isn’t uncommon for K-pop, but unattractive all the same. The dresses might’ve looked better had they not stopped just below the girls’ crotches. Taeyeon’s hair was also a disappointment. Usually, SNSD has amazing hair and makeup artists and they always look amazing, and for the most part I loved their hair and makeup for their “Twinkle” performances, but I do have a few complaints: One is the wavy hairstyle Taeyeon has above, which looks a little sloppy. Another complaint I have is Tiffany’s overly long extensions. She needs to lose an inch or two of hair. 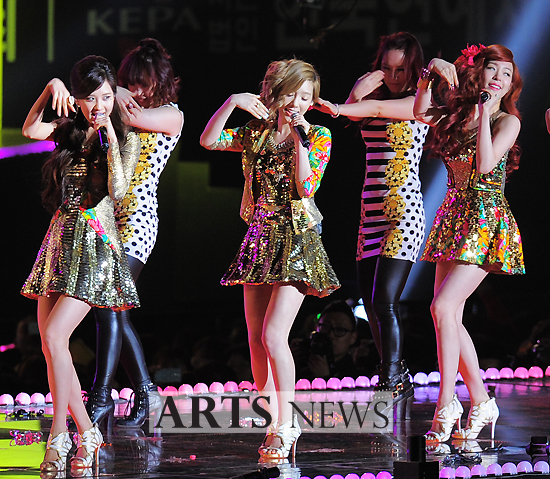 Other outfits TaeTiSeo wore were their very dazzling gold outfits, also seen in the “Twinkle” MV. Smothered in sequins, the dresses also had strips of tropical print, which was an interesting touch I didn’t really expect to see. Tiffany also had a large tropical flower in her hair, adding to the paradise-like image. I actually liked these dazzling outfits – they were fun and eye-catching for stage performances and made the girls look like true divas. 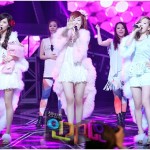 Another outfit set that made the girls look like divas were the pajamas set, also known as their boudoir set. These outfits were also seen in the “Twinkle” music video, during the beauty parlor scene. The long, fluffy robes and curls definitely made TaeTiSeo look like divas waiting to get styled for a great performance, and I liked Tiffany’s cute little outfits best of all, but they looked a little odd onstage. Next to the other idols dressed in perfectly styled clothing, the girls looked like they thought it was Pajama Day and came to perform in their pajamas. 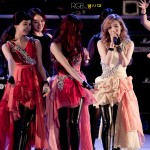 My least favorite TaeTiSeo outfit set of all would have to be the ugly dresses they wore in the “Twinkle” MV and for more stages than they should have. Who commissioned these dresses to be made? They’re hideous, like extremely cheap prom dresses sewn together by a blind man using curtains. The glittering jewels attached to their bodices are cheap-looking and their legs look wrapped in black trash bags. On top of all this, the dresses weren’t even that figure-flattering. Tiffany’s dress cut very oddly into her torso, looking painful, and Seohyun looked swamped in cloth. Also, Seohyun’s hairstyle in the picture shown is terrible – curled bangs and an overly teased ponytail. What did you do to piss off your stylist, Seo? 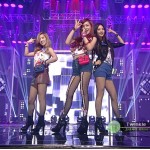 Other ugly outfits include the trashy outfits made from denim shorts and fishnet tights, making TaeTiSeo look like promiscuous teenage girls. There was also the plain, cheap TaeTiSeo wore on Show Champion. The dresses remind of something you’d find at Ross or GoodWill. Tiffany wears a ripped-up outfit and Taeyeon a boring little dress but Seohyun has the worst outfit of the three. The back of her white shirt-dress is overly long, reaching the ground, making her outfit awkward on top of ugly. What I also didn’t like about these outfits is how they didn’t really fit TaeTiSeo’s diva concept. The girls are meant to look like glamorous young starlets but the outfits shown here better resemble cheap Hannah Montana outfits. 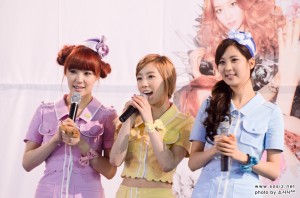 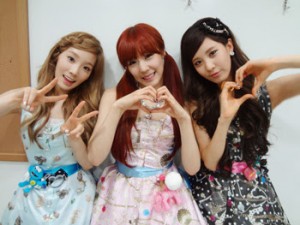 An odd outfit set were their nurse outfits. Nurse or airline stewardess, your call, they were cute but odd. I really love their hair and makeup for these outfits and the cute little hats Tiffany and Seohyun wore but I didn’t like how random these outfits were. They were uniform and entirely different from their concept, not looking like divas at all. The same could almost be said for another outfit set, comprised of girly dresses with fun prints. I actually loved these dresses because they were so youthful and fun, with cartoon characters pinned to their belts.