K-pop idols are packaged in a very specific manner. With few exceptions, most idols do not write, produce, direct, or choreograph any of their songs or performances. Thankfully, there are people to do that for them. One such group of people is the dance company known as Prepix. Prepix’s style is self-described as “Jazz-funk” combined with elements of Hip-hop and Popping. Through their unique choreography style, Prepix has gained world-wide attention. They have won numerous events within Korea and been given the opportunity to dance at highly respected shows like the “Urban Dance Showcase.” Generally, those that work in the background of K-pop stay behind the scenes, yet Prepix has begun to foray into the face of the industry through their own vision of the growing genre.

Prepix’s first project within the world of K-pop comes in the form of training a yet-to-debut idol group named 2PM. While “10 out of 10” was not choreographed by Prepix, they did devise the dance moves to the live performance for follow-up single “Only You.” Soon after, Prepix began regularly choreographing for BEAST. Prepix has been the group of geniuses behind several performances and videos for the group including: “Fiction,” “Breath,” “Shock,” and “Beautiful.” BEAST’s label mate, G.Na, also had all her performances relating to Draw G’s First Breath choreographed by Prepix. Most recently, Prepix lent their their artistic talents to Jay Park‘s “Tonight.” While usually refraining from becoming back-up dancers, Prepix was featured very heavily in the music video. 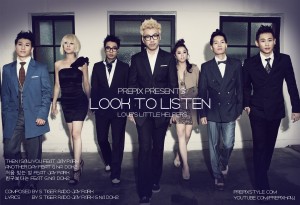 Through numerous connections within the industry, Prepix has begun to release their own music. Working closely with Cube Entertainment has particularly proven to be fruitful. Star-producers Shinsadong Tiger and Rado made two songs for the “new group.” Last month, both songs were released in a digital single entitled Look To Listen: Love’s Little Helpers. One featured seemingly close friend Jay Park, while the other featured songstress G.Na and rapper Dok2. As both featured English speaking artists, the two songs were released in both Korean and English. What’s interesting about these two songs is that no one in Prepix actually participated in song production and singing. It seems as though these songs were produced solely for the music videos.

Through the MVs, one is able to understand how Prepix views dancing. Dancing is a part of life, it’s completely about perception. While you may not see the interaction of budding love as a dance, to others it’s a dance in its most pure and unadulterated way possible. The MV illustrates two people who had just met through a mutual friend, the cheesy effects pointing to love at first sight for both individuals. Prepix intelligently choreographed every movement to make it obvious they were dancing, but portrayed them as more organic than in a regular dance routine.

Following on the heels of Love’s Little Helpers, Prepix released another concept video named “Magic Glasses” on April 24th. This time, Prepix featured BEAST’s Junhyung as well as Korean-American Esna and underground rapper Beenzino. Continuing with the “Dance is a Part of Life” theme, Prepix used a pair of glasses to illustrate their idea. This video once again featured Jay Park, who apparently spends all his free time with the group. The production quality of this video was much higher than in the “Love’s Little Helpers” videos. The dancing was also comparably better. (Though that was probably because the individuals in the video are more experienced than those in “Love’s Little Helpers.”) Free-styling was emphasized quite a bit in this video with different dancing styles from Popping to Locking, Breaking to House, as well as even lesser known styles like Whacking and Boogaloo. It’s always interesting to see dancing in a video that isn’t completely choreography. 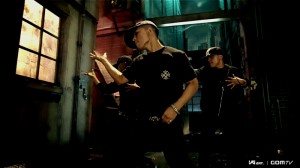 As a dance crew, Prepix is likely trying to find a balance between “choreography” and “freestyle.” Too much choreography risks alienating previously built relationships, but too much freestyle makes for odd dance routines. Unlike other many other power house choreographers (Shaun Evaristo and Rino Nakasone Razalan), Prepix is predominantly freestyle based, so it is very reasonable to believe they want to stay true to their roots. However in the world of Korean entertainment, consistent performances are based on pre-choreographed routines. Their “concept” videos are probably ways to promote dance in the K-pop community.

Like Shaun, Prepix tries to keep close ties with the international dance community. This actually works in benefit to both dance as well as K-pop itself. I, myself, only noticed K-pop becoming more popular (within the dance community) when Shaun started to advertise his YG Entertainment escapades on his company’s YouTube channel. As it stands today, K-pop is pretty well known within dance community. Those with dancing knowledge extending past America’s Best Dance Crew may have seen this video of a crew dancing to Brown Eyed Girls‘s “Abracadabra” or this video (starting at 2:20) of teenagers dancing to Taeyang‘s “I Need a Girl” and CL and Minzy‘s “Please Don’t Go.” Companies grabbing rather high-profile choreographers is beneficial in the sense that it popularizes their product to a different market.

This isn’t to say, dancing doesn’t benefit from K-pop. How did we come to read this article? K-pop, of course. If Prepix had not choreographed for BEAST or Jay Park, it’s more than likely you would have no idea who they were. Not allowing their new found popularity to go to their heads, Prepix is still trying to advertise dance as an art form over themselves as artists. The future probably holds many new Prepix concept videos, but I’d advise to pay more attention to the dance than the song.