EXID: Who Are Theze Girlz?

Last year saw a record-breaking number of K-pop groups debuting, including an abundance of girl groups.  New groups are showing no signs of slowing down in 2012 and one of the latest to join the rookie ranks is EXID.  This 6-member girl group, whose name is short for “Exceed in Dreaming,” are from famed producer Shinsadong Tiger’s new label AB Entertainment and they have just begun to ramp up promotions for their single album “HOLLA.” On the heels of their successful rookie showcase, EXID has just released their first MV “Whoz That Girl.”

The song centers around a break-up, with the male party moving on to a new girl. The video uses elements of this theme to tell the story of a man who seems to be plagued by guilt over the relationship ending. His mind plays tricks on him as he sees his ex-girlfriend every where he goes. The members of the group collectively play the role of the jilted former flame, and they show up at the most inopportune times, making him feel crazy. The camera work is fast and disorienting to give the viewer a taste of the sense of panic the male lead feels as one moment the girl is there and when he looks again she is gone.  In the end, these hallucinations lead to a car accident that leaves him and his new girl unconscious.  All of the members do a good job of acting out the mischievous, trouble-making apparitions. I like that everyone got a chance to shine in this role, instead of using one member, so that everyone got exposure and not just a predetermined “face” of the group. 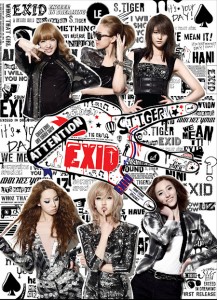 This story is spliced with clips of  the dance version as well as solo shots of the members that show off EXID’s style. Their wardrobe is nothing revolutionary as far as K-pop goes (hello, Jeremy Scott), and rapper LE is already drawing obvious comparisons to 2NE1’s leader CL.  The video as a whole has a high production value, which is a nice thing to see for a new group because it gives them a fighting chance of getting noticed.  The only part of the video that I didn’t really care for was when they went literal with their male bashing; they took baseball bats, chain saws and even a paintball gun to a male mannequin and reduced it to a pile of rubble. While they showed obvious energy and enthusiasm, it seemed like unnecessary overkill and personally, it took me out of the video’s story.

Overall, I give this video a 3.7 out of 5.  They took an unoriginal plot and used fancy filming to tell the story in a unique way, and they’ve certainly piqued my interest.