Oh, Secret, I knew that if anyone would deliver. It’d be you.

Never before have I let out such a huge sigh of relief as I did when I pressed play on this teaser. It was like a world of expectations were fulfilled and I finally have a reason to actually wake up in the morning.

As previously discussed by Fannie, Secret was a prime example of a group that boasted boat loads of talent and potential, strong songs, and strong charisma. Only to compromise it in order to fit the bill to what boosts most girl groups into the eyes of mainstream appeal; aegyo. Luckily, Secret was one of the classier ones to fall into the aegyo hole, with ‘Shy Boy‘ admittedly being, okay, pretty darn cute, and actually a lot less contrived than a lot of other cutesy wootsy songs. Nonetheless, for people who were enamoured by Secret’s original strong attitude, it was a heavy disappointment. And it didn’t help that their follow up single ‘Starlight Moonlight‘ was so not worthy to be a title track- I’d go far to say it would be one of those sugary sweet songs you’d find on the B-side of an SM girl group’s album. Yes. I went there. 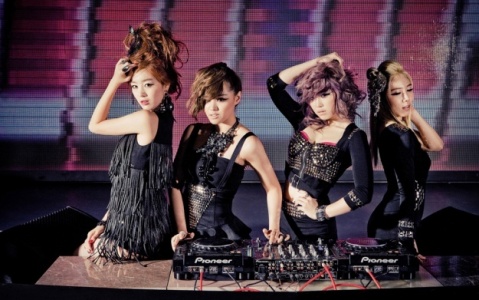 Nonetheless, now that Secret has captured the attention of the public, there’s no need for them to resort to the ‘norm’ in order to gain attention. Meaning we finally get some of that old Secret sass we all know and love. And looking from the MV teaser, it seems like they’re trying to somewhat build up off Madonna. And if that’s the case- I completely approve. There’s nothing wrong with a group sticking to a genre that suits them, there’s a difference between being uninspired and recycling tunes and sticking to what works for you and drawing of it. ‘Move‘ still has an inspirational whilst being a completely new song. The general vibe I’m getting of ‘Move‘ is alike to that of ‘Madonna‘, the beat, the flair, the sax (THE SAX!), but with ‘Move‘ taking a much more noticeable influence from sexy, sexy, swing music. I’m not going to lie, there was a bit of me that was still worried even after seeing the concept photos, just like how people were afraid they’d go for a contrived cute image, I was also a bit afraid they’d go for the already done fifty times over ‘dark girl group’ concept- which is fine and all, but I always considered Secret to be one of those groups that could break the mold.

Thankfully, the MV and song looks like it’s going to be something really great. I need to hand it to TS Entertainment, they have an eye for potential, and it looks like they have an ear for good music as well.