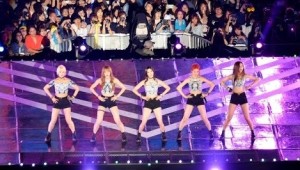 Now that I’ve calmed down from last weekend’s Eurovision euphoria, I can turn my attention to more pressing K-pop matters, like the 2015 Dream Concert. This year’s concert was held on the 23rd of May and included performances from a ton of groups. There was a lot of the usual two-song sets and possible miming, but there were also some things you never thought you’d ever see, like…

MFBTY and Cho Young-nam getting down with the idols

The two main special stages were hosted by MFBTY and  Cho Young-nam respectively, and they were awesome.

Bizzy, Tiger JK and Yoon Mi-rae first performed “Monster,” off their album Wondaland, with a host of idol rappers, including EXID‘s LE, B1A4‘s Baro, and BTS‘ Rap Monster and Suga. This was like a superior version of that Hip Hop stage from the 2011 SBS Gayo Daejun, which is a testament to both the growth of the genre in K-pop and to MFBTY’s abilities — their staged showed just what they are capable of when given control.

After this was a performance of “Bang Diggy Bang Bang” with more idols: Exo‘s Chanyeol and Red Velvet‘s Wendy! I know, I’m just as surprised as you are. While Wendy sort of faded away, Chanyeol was in his element: watching him losing his shit onstage has to be the biggest highlight of the concert, for me. He’s usually someone who keeps a tight leash on his emotions and how he presents himself, so it was nice to see him really let loose and be so raw in the spotlight.

Cho Young-nam performed with a choir of school children… or mostly school children, as idols Leo (Vixx), Sandeul (B1A4) and TS Entertainment duo Untouchable revealed themselves to the crowd. It wasn’t until Cho Young-nam had stepped away from the piano that I noticed he was a school uniform as well. It was seriously adorable, and he seemed to be having a ball with all the youngsters on stage. Not the most finessed performance, but still a heart-warming one.

Laboum and Lovelyz: Queens of the props

Laboum’s Hae-in has been carrying that phone and lugging that giant teddy bear around every live performance of this song, but even when she tires of it, I don’t think I ever will. I just find it so amusing how she’s rolling on the floor with a huge plush doll in the middle of the stage, and that it’s actually part of the performance! I mean, the whole thing is more trouble than it’s worth, but the persistence in its use is something I’m willing to smile benignly on.

Of course, Laboum as a whole is very cute in this performance, though I would have loved more interaction between the members and the back-up dancers.

Lovelyz opened their performance of “Hi~” by releasing balloons to the sky; and while that description sounds pretty ho-hum, the way the did it was so beautifully delicate, just like the rest of their performance.

You could hear the fans singing along with Infinite, Exo and Shinee, but girl group EXID got the same levels of noise when they performed their breakthrough hit “Up and Down.” I don’t know why (or how, for that matter), but the broadcast managed to tune out most of the crowd; so, we must turn to fancams to witness this wonder. Below is the fancam with the least screaming; but if you don’t mind losing your hearing, I highly recommend this one as well.

Secret’s Blast from the Past

Secret’s last release may be last year’s “I’m in Love,” but the group decided to go old-school this year, with an intro of “Magic” before launching into “Madonna.” This stage was pretty rough around the edges — making me think if the song choice wasn’t so much deliberate as it was rushed — but the vocals were stable enough and the ladies did seem to be having some fun.

This was Kara’s first “live” performance of brand new single “Cupid,” but it was the subsequent performances of “Mamma Mia” and “Step” which won me over. Not just for the 100% increase in live singing, but also because the camera captured some of Kara’s fans in the crowd. Unlike the usual shying away and hiding of faces we’re used to in these cases, Kamilia instead rose to the occasion: some threw hearts, some waved, some were too into their fave’s performance to even notice; but they were all adorable to watch.

Speed giving me reasons to rename them Smooth

This is the first we get to see of upcoming single “What U, and the song is pretty good.Speed spices things up with their heels on wheels. They look so smooth gliding across the stage; and it makes the trip to the front stage a lot easier, too. I wonder if they will keep them for regular music show stages, too…

These were my highlights; what were yours?