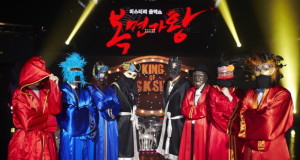 In case you didn’t know yet, these are just a couple of character nicknames in Mask King, a relatively new singing reality show. Not sure if they make more sense in Korean, because they honestly sound pretty ridiculous.

Initially planned as a one-episode Lunar New Year special, Mask King debuted to a positive response and has been picked up for regular broadcast. Touted as a mystery music show, the premise of the show is intriguing, if not entertaining — pit singers’ voices to battle against each other, and in the meantime, let the panel and the audience have a hell of a time guessing the identity behind the mask. Sounds easy, right?

Hell no. Especially not when the singers are bundled head to toe in the most elaborate and strangest costumes, their speaking voices are altered, and they themselves even attempt to change their accent and speaking habits to mislead the viewers. So at the end of the day,the only clue we have is the singer’s vocal tone and techniques, which probably requires more analysis and detail than one would expect. Or alternatively, you can reach the same answer by joining the netizen CSI and analyze nail art and moles. 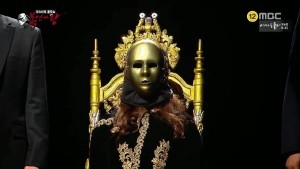 In a society that’s so quick to judge by appearance and stereotypes, it’s a wonder that the idea of a “blind competition” didn’t hit it big earlier. The blind audition process used in talent show The Voice serves as a way for the judges and audience to make more impartial decisions regarding a contestant’s ability, but Mask King takes it one step further.

Being an amalgamation of Immortal Song and Guess Who, not only are we invested in the the winner of the battle, but also in the process of disassociating the voice from the face. Which is actually more entertaining than it looks. And, don’t forget that the true identity of the winner won’t be revealed until he or she eventually concedes the crown. What a way to make sure the viewers keep tuning in.

EXID‘s Solji was the winner of the first episode, and it threw people off terribly that an idol actually won over the likes of K.Will and Hong Jin-young. In fact, it was a precursor for the numerous subsequent idol contestants to grab this golden opportunity to shake off the idol label and showcase their talented vocals just as it is.

While idol songs usually limit the style and range that the members can sing, the Mask King stage is open-for-all. Singers can choose any song they want, and enjoy a 100% un-judged stage. Who ever knew that a mere three minutes on stage without the idol label could be so life-changing, eye-opening, and precious?

Another idol who blew everyone out of the water was f(x)‘s Luna. She won two episodes in a row, and set the internet buzzing for weeks with people dying of curiosity to find out her identity. Many people immediately assumed that it couldn’t be an idol, especially with the exceptional range and vocal maturity the singer displayed. So, you can imagine the reaction that followed when Luna’s identity was finally revealed. After which, people started questioning SM‘s choice to stick such a impressive singer in pop tracks where she hardly gets the chance to show off her skills.

It’s fascinating how Mask King has done so much in overturning the low opinions of idol singers; a significant number of crowns have been won by idols. It’s always satisfying as an K-pop fan to see the audience react in shock when an idol is discovered to be the one behind that amazing voice worthy of praise. For legitimate idol vocalists, it’s a great avenue to prove what they’re really made of.

I can’t wait to see more idols come on this stage to kick ass and prove all the naysayers wrong. When you add back the visual aspect of the singer, a rose by any other name should still be a rose. Although, let’s hope it doesn’t eventually evolve into an idol fest (like a certain rap competition programme).

To give you readers the chance of playing detective, try your hand at guessing the idol singers behind the following masks. The answers will be revealed when you highlight the blank space below the video.

How many did you guess correctly? Did any of the singers’ identities surprise you? Who else would you want to appear on Mask King?