When Hallyu Bites Back

Hallyu, or the Korean Wave, has been known to reach the far corners of the world. The spread of Korean culture and, most importantly, K-pop music has taken root in some very unexpected places, including Venezuela, Brazil, Spain, and France; as well as very expected places, like here in the United States. Fandoms now span the globe and now constitute a major international audience for many influential K-pop stars.

For us Stateside K-pop fans, we know all too well the extent that K-pop has driven into America. SM Entertainment holds SM Town concerts in LA and New York, JYP has an official agency office in NYC, the Wonder Girls have English-language music that they’ve promoted here in the States. In addition, they’ve also opened for the Jonas Brothers and made guest appearances on network TV such as the Wendy Williams Show. You can buy K-pop songs by 2pm, Se7en, BEAST, Jay Park, Wonder Girls, 2NE1 and many more in the iTunes music store. Several kpop groups have shown up on MTV Iggy in Times Square. The list goes on. 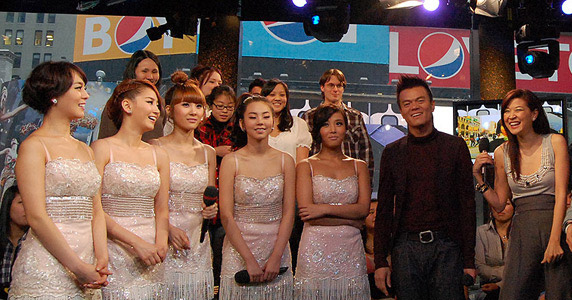 It is without doubt that Hallyu has made a significant impact on world audiences and the idols it delivers to those audiences. For one thing, it has become a major area of focus in the korean music industry, with company after company vesting their time and money into expanding exposure overseas.

It is an odd thing to speculate on, but if Hallyu is so widespread and fervently propagated, it only becomes a matter of time until somebody produces a response. For some this response has been an increase in demand, as we’ve seen in mass flash mobs speckled in the States and in Europe. For others, like myself, it means following latest news on your favorite kpop artists and groups, attending concerts, and watching We Got Married. For Lance Bass, it means creating your very own pseudo-kpop group right here in the homeland.

And thus we have Heart2Heart. . Okay, here we go.

Heart2Heart, as Jean wonderfully profiled not too long ago, is an American pop boy band that had been up until now releasing tidbits of songs through their Facebook page. On October 7th, the group dropped their first minialbum, and their title song Facebook Official has sparked many mixed emotions. Check it out first and then we’ll talk about how we feel about this.

I’m not going to lie. I laughed pretty hard for about a minute. Other than that, this video is just confusing. I mean, I’m seeing remnants of SHINee MV’s and some old school Super Junior hairstyles going on. On top of that, they are literally singing about Facebook. Like, no joke – they are using Facebook vernacular. But perhaps the biggest point of contention is their ‘tagging’ of major kpop artists such as 2NE1, Big Bang, Super Junior, TVXQ, SHINee, B1A4,  KARA, and JYJ, in their video. Many have railed both the Facebook Official production and Heart2Heart as K-pop knock offs, and the group itself is under serious scrutiny in regards to their authenticity.

But that aside, the formation of this group and their music undoubtedly reflects trends we’ve already seen in kpop. It’s hard to look at the situation subjectively and not see Hallyu for being somewhat at fault for this. Though I’m sure that Hallyu’s desired effects did not include the procreation of American pop bands, it’s happened. 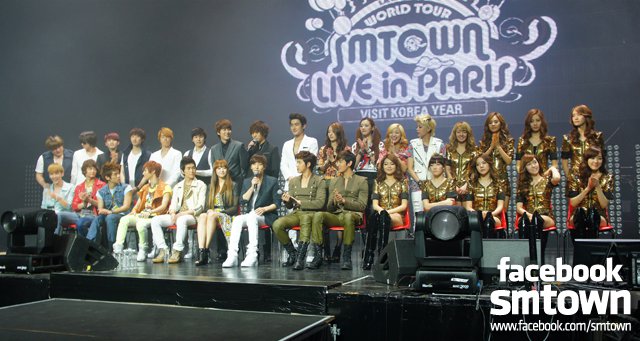 Something like this was bound to happen eventually. With Hallyu becoming increasing entrenched in the global community, all it would take was someone, with enough money, who liked K-pop enough to copy and reproduce the image. Heart2Heart is living proof that Hallyu is having a profound effect on musical tastes outside of Korea and yet, this group is being met with much animosity.

It’s a bit ironic to me. Hallyu has put so much effort into becoming exposed, but as soon as it is recognized and emulated, we suddenly have a plagiarism case and a sea of hate on our hands.  Though I agree that Heart2Heart is a bit odd, I dont think it’s entirely fair to bash them and their grass roots – which are, to some degree, involved with Hallyu. They are but a production of what we’ve been so passionately supportive about, and that would be the expansion of K-pop idols, K-pop music, and consequently, K-pop style.