When I first heard the term ‘bagel’ to describe a prevalent image among ladies of the kdrama and kpop scene, I was skeptical. Why would any fair lady want to be equated with a breakfast, and sometimes lunch, food. And bread, for that matter. Isn’t that everything everyone on the k-scene is NOT eating? 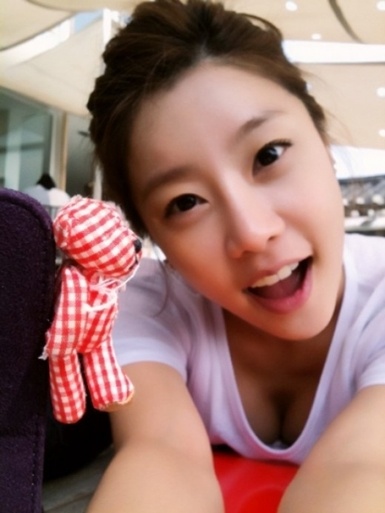 When Girl’s Day member So Jin tweeted the photo above of her somewhat shady cleavage to the world a few days ago, I suddenly realized what bagel meant. I think.

So what is a ‘bagel’ girl? After sifting through pictures of other bagel girls, it’s quite clear to see that the bagel girl is a young, fresh faced  beauty with a killer rack. And quite frankly, there’s really no other way of saying it–bagel girls aren’t as much as sexy as they are cute, but they’re definitely a group of young women who are certainly not little kids either. Simply couple a little aegyo with some supple curves and BAM-you got a bagel.

But it’s not the actual bagel girls that make me question why the concept exists at all. In fact, most bagel girls are voluptuous and proud women like Shin Se Kyung and Shin Min Ah, and I actually give them props for promoting a more pro-curve image in an industry where how small and tone a woman’s figure is perhaps more important than her actual talent. What bothers me the most is the term bagel.

Obviously, whoever coined this term was making a point of the larger breasts that seem to trend with bagel girls. For me, it seems rather perverse to use some vague word like bagel to describe a women’s subtle sexuality, however, I also think the ‘bagel’ idea may be rooted with the cute image that radiates from many bagel girls’ fuller cheeks (on the the face, just to be clear) and cute facial expressions. Such an odd balance of two polar images seems outrageous.

In an industry where overt sexuality is taboo, the rise of the bagel girls caught me a little by surprise. I’d still like to see these curvy women be more than just ‘cute’ and ‘busty’, as some netizen describe them, but as long a cute remains a prominent and appealing look, ladies of all shapes and sizes will go for it, attaching any other label they can along the way. All the same, at least these women are able to make a statement about being fuller figured, and even if it is still ‘cute’, the appeal is getting out there. So, despite the weird terminology, I guess all that’s left to say is, you go bagel girls. Do your bagel thing.