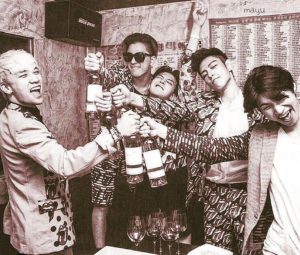 Ten years ago today, a five-member group debuted under YG Entertainment. While some of their first singles such as “La-La-La” and “Only a Fool’s Tears” paved the way for the group, their name didn’t start to become recognizable to many until their release of “Lies.”

On that path, their hits continued to skyrocket and placed more stepping blocks in front of them. “Haru Haru”, “Tonight”, “Fantastic Baby”, and “Bang Bang Bang” are just a notable few.

Yes, this group is Big Bang.

In ten years, this group has become an international sensation and have achievement what many have not. For example, headlines in the United States especially have been talking about them a lot this year. They’ve even made onto Forbes as the first Korean act to be placed on their Celebrity 100 list.

What’s great about Big Bang is that not only do they receive love and respect from their fans all over the world, but from other in the entertainment business as well, with many paying homage to Big Bang and their songs.

Below are ten such examples of covers and homages, from a varied collection of people.

It’s not very often that celebrity covers come in the form of a music video. Despite the comedy aspect, the similarities to the original video stays true to the concept of the song.

If you follow JSY, he is noteworthy fan of Big Bang and especially of T.O.P’s persona if you hadn’t noticed from the first video.

What’s a better cover than “Eyes, Nose, Lips” by a band singing live on the radio? Probably not much else. Jae and YoungK deliver smooth and strong vocals while accompanying them with their instruments.

If you were impressed with this, check out the group’s cover of “Lies” from KCON NY this year!

Gaining popularity since his debut in BgA, JunCurryAhn is a YouTuber noted for his violin and/or dance covers and music video recreation. In this particular video, he does both. His hair is even similar to G-Dragon’s during that time.

IU, who has made it onto a Big Bang track, specifically with Seungri, lends her voice to one of group’s only song without a music video.

These three are no stranger to their fellow label mates and have proven so on Weekly Idol during Random Play Dance. With Chanhyuk’s rearrangement of the song and Soohyun’s and Lee Hi’s strong vocals, they give the song a new sound.

Even though Chad Future has left the K-pop scene, the English Remix of this song leaves a good impression. At times, translating literal lyrics and fitting them into a melody almost never works. But in this case, the lyrics flow well with the melody and doesn’t sound choppy at all.

At first, the tune starts off real slow. But soon as some of the girls hit the lyrics, the crowd instantly recognizes the song. The rearrangement definitely takes it down the ballad route with more of the original track’s feel at the end.

If you ever wondered what “Bad Boy” would sound like on ukulele, then here’s your chance. Sungha, who is well known for his instrumental covers and even performed with 2NE1, turns Big Bang’s song into an enjoyable and relaxing melody.

This list would be incomplete if BTS was not mentioned in any sort of way. It’s utterly obvious how much BTS fanboy and also respect their musical elders, especially Jungkook and V. It might only be a song on a karaoke set list, but you can’t help but enjoy their energy and sing along with them

This list is only ten videos, but there are a lot more out there. Share any that haven’t been mentioned and continue to celebrate 10 years with Big Bang today and all of this month.