A Song of Fire and Ice: Taeyang’s “Eyes, Nose, Lips” 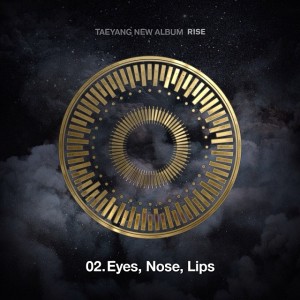 Even though it is now summertime in the Northern hemisphere, winter has finally arrived in the form of Taeyang’s “Eyes, Nose, Lips” MV.  YG Entertainment kept to their schedule, this time, releasing both the MV and album on June 2nd.  “Eyes, Nose, Lips” serves as the title track from Rise and comes as the follow up to the pre-release track “Ringa Linga” which was promoted in the latter half of 2013.  While fans were kept guessing the style of the title track after “Ringa Linga” served a more hip-hop infused sound, “Eyes, Nose, Lips” instead strips down in a minimalistic fashion, emphasizing the vocal delivery and lyrics. The MV is also quite barren – choosing to focus on the artist and song rather than provide anything overly ostentatious (although that fire was quite grand).

The song is a slow burner. It opens with a lovely piano melody backing Taeyang’s singing. He showcases his soulful vulnerability. The chorus is a stunning because of how subdued it is, but it is the honesty in the singing that cuts through. While Billboard draws comparisons between this track and John Legend’s “All of Me,” this isn’t Taeyang’s first foray into R&B balladry; however, it very well may be his most stripped down single to date. While some percussive and synth elements join the track as it progresses, the song shines the most when it is emphasizing the heightened brooding anxiety over its explosive emotional exclamation.

The song is cowritten by both Teddy and Taeyang. The lyrics are striking as it speaks about accepting the pain of a relationship that has passed. It maneuvers between very tangible physical senses indicative of the title and the intangibility of love. When Taeyang sings about his love, he remembers her voice saying “I love you” or her fingertips when they touched.  It is a concrete attachment in the physical world that gives depth to his emotions when he describes his nostalgia over foregone love:

All of our love,

It hurts so much, but now I’ll call you a memory.”

He talks about how the abstractness of his selfishness was an imprisonment which caused their love to be snuffed out. The navigation between an innate understanding of love and how it is tethered to the real interactions between his lover and he, makes this song at once relatable and quite impactful.

While the song does a wondrous job in setting the tone for the video, the MV acts as more of an environmental setting for his emotions rather than a visual representation of the lyrics. For a majority of the video, Taeyang stands and delivers this song. Sans a shirt while maintaining a heavy gold chain around his neck, he stands amidst falling snow. He is barren, and it is a statement to the power of the song that the video doesn’t become overly cumbersome in its simplicity. The focus is on his impassioned embodiment of the song.  The action in the one shot MV moves with a slow zoom out from Taeyang’s tattoos before he erupts into a short dance sequence after panning from the billboard, which may possibly represent his memories of his love bursting into flames. 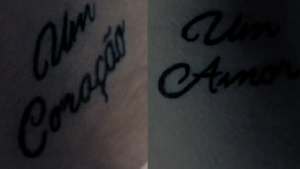 Some interesting details to note are the messages written in varying languages that are shown at the beginning and end of the video. At the start, “Um Amor” and “Um Coração” translated loosely in Portuguese (via Google Translate) to one love and one heart, respectively. There was also a message scrawled across the billboard showing actress Min Hyo-rin that became almost totally illegible except for the word ‘love’ (in English) once it erupted into a fiery blaze at the climax of the MV. These words are nice little messages that stand on their own but may possibly be further delved into during his next video for “1 AM” — but only time will tell.

While I do appreciate the simplicity of the MV, I personally would have loved to see more action in the storytelling. The one shot MV is not a novel innovation, but it did draw focus to the song. Also, if you like a shirtless Taeyang, you could probably give this video at least one point higher. Even with that said, the song is a beautiful ode to a love that once burned brightly.