Throwback: Big Bang Gets Their Start with "Lies" 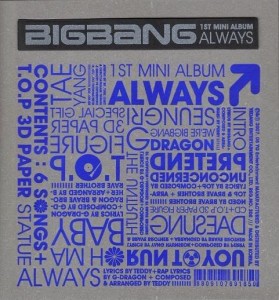 Can you still think of Big Bang without colorful hair extensions, symbolic props and crazy fashion styles that will leave you wondering for days? I wouldn’t hold it against you if you couldn’t.

In the light of their recent comeback with “Bae Bae” and “Loser”, it’s about time we look back on a different era where Big Bang was seen in harsh tones of gray. It was hard to pick just one video to throwback to; It came down to a war between “Haru Haru” and “Lies”, but ultimately “Lies” won out for its role in Big Bang’s break through and influencing their career for years to come.

Released in 2007 as part of the groups “Always” EP, this song got them the hit they needed to bring them to mainstream success. With this killer track, they went on to win “Best Male Group” and “Song of Year” at the Mnet Asian Music Awards, or Mnet Korean Music Festival as it was known back then. They haven’t stopped winning awards at MAMA since. Heck, they don’t even need an award, they just turn up to perform. Fingers crossed for another rendition of “Fantastic Baby” at this year’s MAMA.

“Lies” was the start of G-Dragon’s contribution to Big Bang’s music, a combination that could never go wrong with him spawning many more hits in years to come. He originally wrote this track for his solo album, but was ‘persuaded’ to give it to group. We start to see ideas in that release that are mirrored in future releases, specifically one of my favorites, “Love Song”. It seems GD really hates writing love songs, with the lines ‘I’m so sick of love songs, Yeah, I hate damn love songs’ featuring at the start of the song. Though his funky additions of “Who You” might contradict that statement. 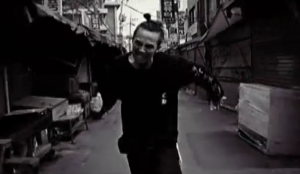 This song was a bit of a hit and a miss for me, I find it a bit whinny and annoying — I have never liked break up songs. Yet, I can still see its value and musicality, because it’s damn catchy. The hook, ‘I’m so sorry but I love you’, seems to have permeated throughout the entertainment industry, with comedians like Boom taking it on board as part of their act. I admit, I have been found guilty of singing it unconsciously more than a few times in my life.

Baby Big Bang didn’t tend to feature colorful sets and symbolism as they do these days, instead choosing to use dramatic plots to set the mood for the song. This MV features one of the most intense plots I have ever seen in a K-pop MV. It starts with G-Dragon running desperately – a trend in a lot of MV’s that he may as well be called Forest Gump – away from the police. Why is he running away? And who is this girl he risked getting caught just to call? All these questions will be answered in due time. But not without drawing out the viewers interest and anticipation for those answers.

The viewer is sucked in with shots of the girl going about her daily life worriedly with Big Bang singing to her as if they are invisible to everyone else. It is clear in the MV that Big Bang actually represent the turbulent thoughts of the girl, as she deals with the situation that has been forced upon her. They’re there wherever she goes — to the super market, the car park, and Daesung is even there when she is in the bathroom. Way to respect her privacy! They also use some peculiar modes of transport, whether it be roller skates or a trolley. Big Bang is the only group I know of that can skate around on roller skates and still keep the mood of the MV serious and intense. Also, be in awe of their mad skills on those skates as shown at the end of the MV, clearly one of the YG trainee requirements. 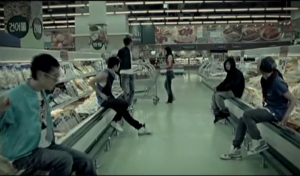 The plot comes to an end when it is revealed that she killed her abusive boyfriend and GD is taking the fall for her. The dire realization of this plot adds a new intensity and dynamic to the already emotionally charged break-up song, making you unable to rip your eyes away from the screen. This is something that a lot of Big Bang and YG MV’s do incredibly well, bringing new meaning to a song through the visuals. It’s not all flashy sets and meaningless symbols.

What, no crazy clothing choices, you say? In “Lies”,  jeans and T-shirts are pretty staple as it makes them fit in with the environment around them. It seems that as the group evolved through the years, they became more dapper and possibly insane in their style choices. Though, is that a man-bun I spy with my little eye? GD living up to his title as a ‘trend setter’ once again.

This release is what defined Big Bang, setting them up for the massive amount of success that was about to come. Future releases like “Haru Haru” clearly were built off the success of this song, using similar themes and style to attract an audience. It became G-Dragons first major song composition to be released; the benefits of such talents we are all still receiving today with his work on solo and group albums. However, Big Bang has evolved and is still evolving even now, 9 years into the game. It seems like you never know what they are going to put out. With many more releases promised for this year, you can be sure VIP’s are going to be waiting in anticipation for more.

So what has been your favorite Big Bang release? What first attracted you to them?