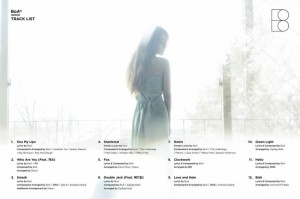 With stirring and sweet previews from her eighth studio album rousing interest and passion among fans, BoA’s pre-release “Who Are You” featuring Dynamic Duo’s Gaeko has already become a proto-phenomenon.

After carefully viewing her poetically nymph-like album art, the poet dormant within me has awoken to another couplet on its tongue;

“In shades of moss and ivory a goddess gazes back, at the passion of persons collected brilliantly in a stack.”

It is a true thing that the “passion of persons” is actually quite messy and maudlin, never quite neat enough to be arranged in a “stack,” but in the case of Kiss My Lips, BoA creates a theme that is a study of still-life, languor, and pastel echoism while relaying her ardour and excitement towards her fans and the K-pop scene. Likewise I expect the “passion of persons” aka the fans, to mirror BoA’s neat and silent passion in this album.

Then again, as all masterfully composed pieces of art in their serenity are thrilling to behold, they are often preceded by something snazzy, rhythmic, and entertaining to create hype towards their unveiling. Such is the case with BoA’s “Who Are You,” whose MV features youth at its pinnacle, budding love, and innocent emotions wrapped into a catchy and musical song. “Who Are You” is a foray into BoA’s writing, composing, and producing mastery and creates an unsurpassable musicality that endorses her “Queen of K-pop” title. 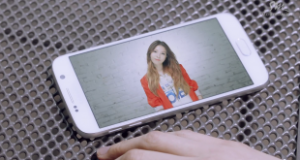 “Who Are You” quietly accompanies us into a cozy and blanched studio decorated in cactuses, with a pretty young woman staring up at her phone restlessly as she lolls on her couch. Uncommonly enough, the very first scene of the MV diverges from what I had envisioned it to be. After reading about EXO’s Sehun featuring in BoA’s MV, one might think that “Who Are You” would be an upgraded recollection of an aching breakup similar to “Disturbance,” which featured SHINee’s Taemin and saw BoA in the throes of her failing relationship, singing of a disconnect with her lover and the absence of true love.

The two main contrarieties in this expectation are that 1) the female protagonist in “Who Are You” is not BoA herself but the yet-to-debut actress Kim Hyun-ji (this situates BoA as an omnipresent narrator), and 2) “Who Are You” is the opposite of “Disturbance” because it explores a proto-relationship phase in which love entails the curiosity of two people towards the identity of the other (thus the “Who Are You” title is completely relevant).

By making these two contrarieties clear straight away, BoA ushers “Who Are You” into something of sheer relativity and originality, and shines a blinding light into the eyes of K-pop’s umbra, which to be honest, is the vacancy of originality in the conceptualization of a song or MV. Gaeko’s rap further enhances the soulful quality of “Who Are You” by leveling the depth of the musicality and lyrics through an airy and succinct rap that aligns perfectly with BoA’s vocals. 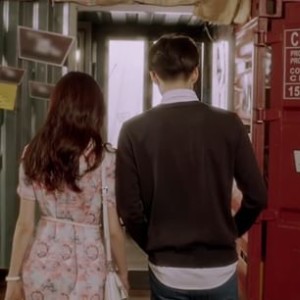 As soon as Kim Hyun-ji receives a LINE notification on her phone, perhaps one that she had been waiting for while daydreaming about romance, BoA’s vocals plunge into a soft and detectably English vigour, creating an opening that demonstrates her linguistic versatility and immediately welcomes her fans to “Who Are You” in the universal language.

Additionally, her enunciation of and experimentation with English lyrics straight into the song audibly declares her confidence in her writing and singing ability. As the lovely heroine primps and chooses the perfect outfit for her date, BoA’s locus in the technological devices she totes (cellphone, television set, white version of Kai and Tao’s “Call Me Baby” headphones) make her both an obscurer and illuminator of the heroine’s love interest; BoA magnifies the heroine’s emotions through her song while leading her through small tests that start with a seat in front of the wrong guy. 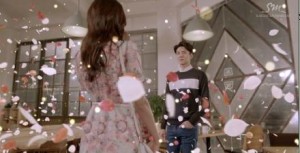 Through the meet-greet-and-retreat sequence BoA essentially simplifies the misconception surrounding a first love, which is exactly as it is portrayed in her MV. An enthusiastic young woman who does not know the identity of the love interest she has gotten acquainted with through SNS, dons a charming dress and goes out to meet him. She then meets the wrong guy and gives up on any chances of her finding the right guy. To this point is the realism of “Who Are You,” as the chorus beats in the background and shows the heroine’s train of thought and the direction of her heart.

Who are you stranger

Can’t stop thinking of you

Love is all the same

But you’re special, but you have no answer

After reality settles in and the discouragement teaches the heroine about the nature of love (no matter what phase it is in), BoA gives her some courage and resolve by reiterating the lyric “you’re special, you have no answer” (reminding the heroine how important her perfect guy is to her), therefore leading her to a handsome-looking Sehun, an explosion of flowery contentment, and to the resolution that love is unattainable when it is grounded in fantasy and mystery, but also that the existence of fantasy and mystery are critical elements in discovering what it truly means to love.

Hence readers, I earnestly say that “Who Are You” is that snazzy, rhythmic, and entertaining escapade that has prepped me for the masterpiece that will be Kiss My Lips and has hopefully done the same for you with its memorable melody, lighthearted theme, originality and relevance, intriguing moral, and of course, its fantasy-fest of beautiful faces, tasteful imagery, and unavoidably comedic advertisements.

And now I ask you readers, has “Who Are You” ignited a flame within your hearts and motivated you to check out BoA’s album Kiss My Lips on May 12th?