After multiple delays and endless teasing, Infinite finally released their comeback full-length album Season 2, along with a snazzy MV for their title track “Last Romeo”. Judging from the Shakespearean inspiration alone, we can already expect some version of a love story with a pining Romeo and Juliet, whose story unfortunately results in a tragic ending. True to its identity, Infinite once again delivers their signature 80s-sound with a song bursting with electric guitar synths, trumpets and drums.

The first 50 seconds of the MV is simply Ctrl-C and Ctrl-V of the teaser, with the Intro track playing over scenes of Infinite running and forever chasing after some mysterious girl. The colour scheme immediately sets the dark and gloomy tone in place, and the intro blends seamlessly into the song. 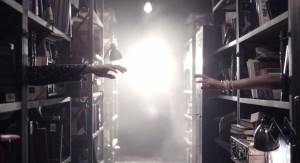 The MV for “Last Romeo” is a a dance choreography MV, interspersed with scenes of a vague storyline. Woo-hyun biased fans would be delighted to know that he’s the main character for the plot, stealing a bulk of the screentime for himself. Perhaps this is an acting trial for his upcoming drama High School.

In any case, Woo-hyun is the Romeo, on an endless pursuit of his Juliet (Mi-joo, a current trainee under Woollim). He starts out in an empty library filled to the brim with tall shelves and books, searching for the presence of somebody by observing the lack of dust on the shelves and noticing marks on the wood. The tied ribbon immediately clues him into realizing that Juliet lurks nearby, leading to the start of his promising chase.

Unfortunately for him, distance proves to be an obstacle as they can’t seem to reach each other across the bookshelves. The elusiveness of Juliet frustrates him to the point that he goes Hulk-like and loses control of his emotions. Everything around him tremble as though there were an earthquake, an accurate representation of his inner turmoil coupled with the timely crescendo in the bridge. 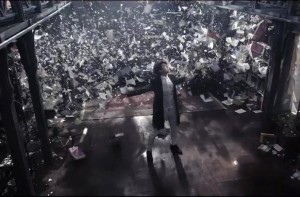 How fitting is it that Woo-hyun’s voice chimes in just as the books erupt into a firework of papers — a powerful imagery that can double as a gorgeous day of snow, and the destruction of the surrounding world. I especially like that he sings the ultimate climax of the bridge, which grounds the viewer thoroughly in the emotions of his character. His line “I’ll be the last man/ to fight against the world over one love” displays the utter desperation of his love, and his will to be the last man standing, the last Romeo in her life. The ending scenes of him falling through the fog could be interpreted figuratively or literally. Is he merely losing faith in his love, and cutting everything loose to return himself his freedom? Or is it something more literal? Well, it wouldn’t really be fitting of Romeo with no tragic ending.

While I don’t very clearly see the link of Romeo and Juliet to the lyrics, I think fans generally comprehend the anguish and pain of the inability to be with your one true love. The starting lines of the song “I don’t care if it’s poison / I will gladly take it” is the most obvious link to the Shakespearean tragedy. Apparently, the title of the song was decided by Woollim’s CEO before the song was chosen, so the lack of a more tenuous link is partially forgivable. 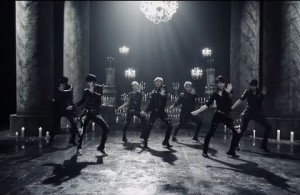 While “Last Romeo” does not boast the trickiest or toughest choreography, the punchi-ness of the hard-hitting moves accentuates the perfect synchronization of the seven boys, which is something that still boggles my mind over and over again. The choreography is unique and evolving, especially the sassy hip-shake and finger-snap that coincide exactly with the syncopation of the drums. Also, it helps that one can feel the boys’ passion in executing each and every move, notably when they reach their hands out towards the camera in such tangible distress.

While Infinite occasionally gets dumped with unfortunate hairstyles, they have been generally blessed with sharp and spiffy styling, and the costumes in “Last Romeo” simply take the cake for me. Never mind the blue hair on Hoya or the distracting hat on L, the all-black and all-white outfits scream perfection like no other, and it suits the image of a Romeo to a T — masculine yet elegant. All seven boys — I mean, men — fit their outfits flawlessly, and I’m glad none of them had the misfortune of wearing a skirt. When will K-pop stylists ever realize that while K-pop male idols look good in skinny jeans, they look great in suits. The monochromatic outfits also further emphasize the incredible synchronization of the seven boys, showcasing some beautiful neat lines. 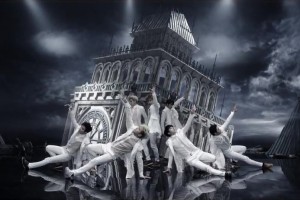 It’s evident that Woollim poured endless amounts of effort and thought into the MV, even to re-filming certain water scenes to avoid being insensitive to the Sewol ferry tragedy. The beauty and grandeur of the sets added a essential finishing touch to the MV — the half-buried clock tower, the multitude of candles, as well as the majestic library. Viewers would have added appreciation for small details that were included — the wire scene that took hours to film, the paper mess that must have been a pain to clean up.

“Last Romeo” has typical desperate Infinite lyrics, a catchy chorus line with a colourful albeit occasionally overwhelming instrumental track that is quintessentially Infinite. While it’s nothing as earworm-y as some of their previous singles, the song, the choreography, and the MV all build on each other to draw the viewer in and I’m left a happy camper. With a MV that’s pleasing to the eyes and the ears, I’m willing to overlook minor though questionable hair and headwear choices. While I’m generally iffy on MVs that try to deliver both a storyline and the dance, “Last Romeo” manages to strike a reasonable balance between the two, satisfying me thoroughly on both counts.

While it’s a relief to see that Infinite has retained its colour despite the merger with SM C&C, Woollim has resorted to bartering YouTube views for dance practice videos, something SM is infamous for. Thoughts? That aside, what do you guys think of Infinite’s “Last Romeo”?