Expectation vs. Reality: 2NE1's "Gotta Be You" 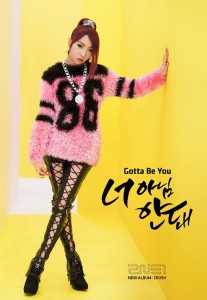 If there is one song off 2NE1‘s Crush which gives close competition to my love for “If I Were You,” it has to be “Gotta Be You.” There is an interesting structure to the song which allows each member to take her time to absorb and execute her part. While there is no doubt that the second half of the song is dedicated to CL, – she makes a distinct space for herself vocally – it also can be argued that Minzy’s progression to the strong chorus remains the highlight of the track. The calculated fluctuations in the vocal strength, aggression and the beats make for an unpredictably great song, and naturally had me looking forward to the MV. Unfortunately, the anticipation was in vain. The music video does not do credit to the song, and in fact, leaves a bitter aftertaste.

It’s not as if the MV did not have potential. It had immense potential! Pop art references, neon mazes, generous use of symbolism, a promising storyline, stunning zombie-inspired costumes, and a fancy British model – things were not supposed to go awry if not for the wretched execution.

A black-and-white screen, with the subtitles “I’m the one who needs to apologize. I want to make things better,” opens the MV. These subtitles become our only means of ‘listening’ to the guy’s voice. Throughout the MV, he keeps on lamenting and making excuses for his broken relationship but never once does he truly apologize. The lines given to him are also far from genuine. These are dialogues which are well rehearsed, in fact over rehearsed, and don’t have even a tinge of remorse in them – “She’s just a friend, it didn’t mean anything. You have my full attention, I promise.”

With Sandara entering the video, we shift from a black-and-white frame to a neon coloured one. It seems that Sandara enters the maze from the outside, white space but later in the MV it is revealed that the guy occupies the centre of the maze, a white centre. Therefore, Sandara actually doesn’t enter the maze.  She tries to leave it and hence, enters the colourful, happy and hopeful outer world.

The correct corollary would of course be her finding the way out from her broken relationship but the phone rings, and the viewer is thrown into a storyline which deals with a toxic relationship and self-loathing women. Things go completely haywire henceforth.

As CL raps that “I hate myself for still not being able to forget you,” she merges with the yellow walls which also has a yellow smiley, as she is doused in yellow filter. This scene had me baffled the most for I didn’t get why something so glaringly disastrous was considered okay for the MV. 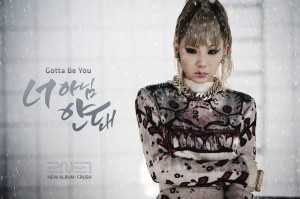 The MV does not really have a progression, rather it has the same point of view – used and thrown away by the guy – being repeated by the different members. You have Sandara drenched in notes showered by the toxic ex, the bunny (?) girls representing the rampant objectification by “prince charming.” Minzy’s inclusion within them shows she hasn’t had a different experience. There is too obvious an attempt to infuse the otherwise substance-less video with symbolism, and since it isn’t seamless, it appears almost hilarious. The “Brio” soaps and the milk really killed the angst the video was trying to developing.

There is a lot of locking in and locking out, opening and closing, looking at and looking away from, walking in and walking out – all of it futile since they are stuck in a maze but these are the stuff which gives the MV some character. Minzy opens a locker of sorts, Sandara has the key with “1” written on it, and CL looks into the red hole to get a view of the black-and-white centre. Personally, I think all of these are means to get out of the maze – the empty locker as a reminder of the hollow relationship, they key literally the way to get out, and CL’s glimpse of what lies beyond being dismal compared to the reality she was living in.

However, the positivity of these actions gets reversed when the guy appropriates the same. Unlike the members, he has a bunch of keys, – access to every door, locker; every entry and exit – he opens the locker to peer into the other world, almost keeping a check on whether the members are as delusional as he would like them to be. This “keeping a check” attitude is exemplified by his use of binoculars and his complete lack of movement. He is so repentant that he can’t bother to move his sorry ass. Instead he sits on his throne and keeps a constant watch on the girls. The dice indicates chance, manipulation and gamble. For him, it is a nice little puppet show where he is taking a gamble stringing 2NE1 – if he wins, great! If he doesn’t, no big deal. He is next level creepy and manipulative, and 2NE1 despite knowing this, strives to mend broken ties no matter if it implies locking up “again in the jail named YOU.” Not quite the greatest message out there.

Coming to implementation of pop art, pop art is often that radical sphere at the fringes where one has a uniquely subversive manner of presenting highly political views. As it still figures out the “comic or painting” debate, pop art remains a powerful medium to channelize radical points of view in accessible forms. So much, sooo much could have been done with this! It presented 2NE1 with infinite possibilities and offered them a chance to refurbish the self-destructive message into something more positive but nothing, absolutely nothing was done. The pop art references only helped in showing the lyrics of the video in English, that’s all. 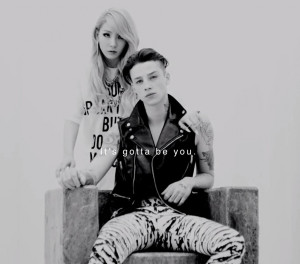 This is why the MV is so particularly frustrating. It had everything but lazy execution on the part of the production team killed any chance of redemption.

I think I have said enough on the unhealthy lyrics of the song but nothing has left me more disturbed than the line “You don’t search for love. You just end up there” painted on the yellow walls. This line justifies CL’s decision to return to the guy, it justifies the existence of harmful relationships, it justifies a man’s abuse of a woman simply because it’s inevitable; it’s all love. Genuine love doesn’t make anyone end in the arms of their exploitative lover but these little lines like the one mentioned, and “Love is merely madness” repeatedly assert that that’s how the way it is.

This mental bind of the members makes me think that may be the subtitles are given because the guy is genuinely not speaking at all, maybe he is not speaking those words which the girls want to hear so they shut him up and show the viewers only the lines which they want to hear, lines which would purify the “bad boy” image somewhat.

Apart from the themes, concepts, and the story, the other thing which stands out sorely is Park Bom’s poor lip-syncing skills. I love her voice, I love her style of singing but she really needs to work on her lip-syncing, and expressions.

Brimming with potential, 2NE1’s “Gotta Be You” fails to make a mark due to lazy execution, and deserves a 2.5/5.