The Person by Haha's Side 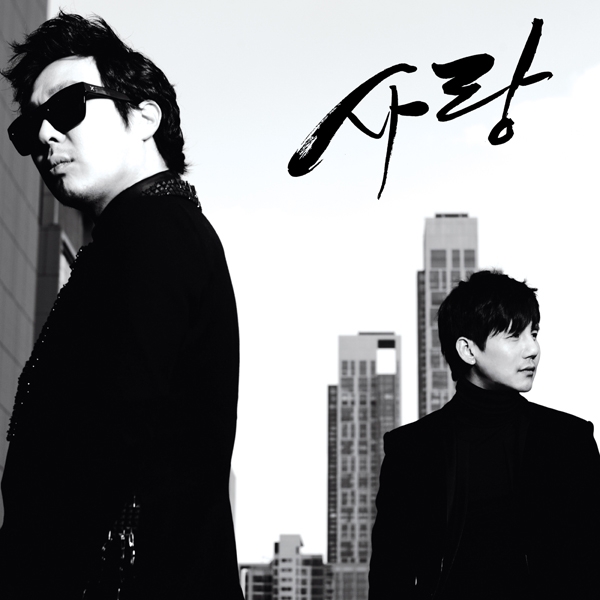 I have a confession to make: Haha used to be my least favorite person on the cast of Running Man. When I first started following the show, I hated him for constantly trying to hog the spotlight and waste precious airtime with his ill-conceived notions of staging personal movie-lead sequences in the middle an otherwise relevant and enthralling game of urban survival. However, slowly and steadily through the course of the past year, as certain gimmicks were phased in and others phased out, I found that Haha had somehow managed to wend his way into my reluctant heart. In fact, I’d even venture to say that he is in serious contention with Gary and Song Ji-hyo (for the record, I don’t really believe in the Monday Couple; I think Haha and Ji-hyo have more chemistry going on, never mind that that Jihyo is already taken in real life) for the honor of currently being my favorite cast member on the show.

It wasn’t the characters that he enacts (“child,” “betrayer,” and “player”) that made him grow on me over time, but rather, as the show went on, I started seeing hints and flashes of the real Haha, and surprisingly I liked what I saw. The kid has heart. Not only do we get to see his adorable mother (who is a famous author in Korea) pop up every now and then, but I also find that it’s mainly Haha and Yoo Jae-suk who go out of their way to take special care of the guest stars on the show. Jae-suk’s method of doing so is to act as the competent and cunning leader, while Haha makes a fool of himself to make the guests feel at ease. That is not to say that he is weak or incompetent by any means; he’s an unreliable player because he likes to switch up the game to make it interesting, and to give other disadvantaged characters (such as the invisible G-Dragon) a fighting chance.

Haha isn’t afraid to joke around with himself, which is something of an asset in the variety world. However, oftentimes people aren’t aware that he has many other facets as well. Both Haha and Gary were actually musicians before becoming famous in variety, and they still hold those professions to this day. Another interesting thing to note is that both of them undergo surprising transformations when they step out on stage, especially in the case of Gary (I was floored the first time I experienced the sexiness that is Gary of Leessang in full force). Neither of the two take themselves too seriously as variety personas, but when they are up on stage, it is readily apparent that they both take themselves very seriously as musicians. Here is a whirlwind history of Haha as a musician:

Haha was actually born in Berlin, but moved to Seoul when he was an infant. In 1995, after being swindled by an agency, he managed (with monetary help from his mother) to release his debut album through the Ok Jung Project. He also released another album in 1997 self-titled Ha Dong-hoon; both of these early albums are nearly impossible to find — especially on the internet — these days. In 2001, he debuted under Seoul Records, this time as a member of the hip-hop boyband Z-Kiri, which never really took off. After the group split apart, Haha switched over to working in variety for a couple of years while preparing for another solo album, The Beautiful Rhyme Diary (2005). The album held an impressive lineup of 23 songs, including collaborations with artists such as As One, MC Mong, Jang Nara, and Kim Hyun-joong. Unfortunately, the album and its lead single “Love Song” failed to chart, and so for the year after that, he focused once again on the variety, drama and film circuit instead.


In 2007, Haha released his adorable second single “You Are My Destiny,” which managed to reach #1 on the GaOn Chart. In addition to working variety, he continued to release other singles up until 2008, when — aside from a feature in Davichi‘s “Love and War” — he disappeared temporarily from the scene for his mandatory military service. After he was discharged from the military in 2010, he not only made an immediate return to variety, but also began recording for his second album, Quan Ninomarley A.K.A. Haha Reggae Wave (2011). 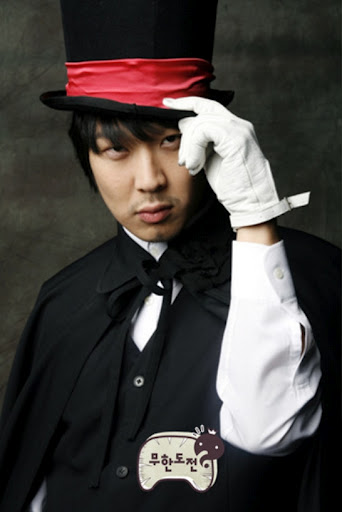 Although Haha began his musical journey as more of an R&B/hip-hop singer, these days he is regarded more commonly as a Reggae artist and comedian. However, with his most recent album Acoustic Tuning Time (2102) we get to see the return of a more serious side as well. The album, released on March 22nd, 2012, is a collaboration album with his longtime friend and fellow ex-Z-Kiri member Taw.

Poor Haha — as a musician, he can’t seem to ever catch a break. Not only has his comeback consistently coincided with Big Bang’s time after time, but on the April 5th special episode of Infinite Challenge, he lamented:

As soon as my album was released, MBC and KBS began their labor union strikes. I even paid for and filmed the music video myself, but it ended up being deemed unfit for broadcast. There’s nowhere I can play the music video.

In the episode, he beseeched Infinite Challenge fans to go check out and download his music. With that being said, let’s now take a look at the MV that they released alongside their album.

“The Person By My Side” (feat. Ha Dong-kyun)

I am a huge fan of texture interplay in music videos (which is also why I liked the music video for SNSD‘s “Time Machine” even though I’m not the biggest fan of their music), and I find that it is employed quite beautifully in this MV. The room is cast in a warm haze of light; combined with ice sculptures everywhere and the condensation on the decanter, there is a numb and frozen-in-the-dusk feeling. The camera subtly fades the surroundings in and out of focus, lending a softness to the music video, combined with the sharpness of the glass and ice shards as well as the coolness of the ring, which splashes as it falls to the bottom of the glass. The closeups to the actress’ face and her eyes are superimposed with shots of the ice melting and dripping, alluding to tears. In addition, shots of a darker version of the actress are inserted into the music video alongside a version that is bathed in the warm light.

Warmth. Icy coolness. Softness. Harshness. Clarity. Haziness. Light. Darkness. I found that all of these elements worked together well to complement the tangle of feelings expressed within the song. In addition, I found the fleeting shots of Haha and Taw to be well-placed; it got the singers into the frame without imposing too much of a presence on the music video itself.

With all that being said, I can also see how this music video can give off a bit of an amateur feel to some. I’m not too big of a fan of the general room decor, and the shots were shaky and blurry most of the time, although I will chalk that up to a conscious stylistic choice more than anything. 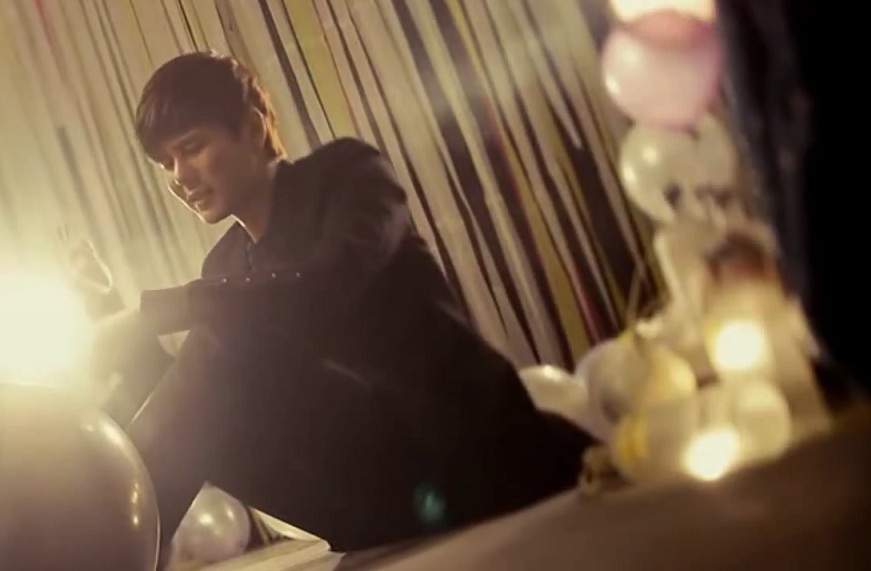 There wasn’t too much of a storyline for this MV, which is fine in my book because I don’t think that every music video needs a convoluted plot. However, while I get the overall concept of a heartbreak (and possibly the breaking of an engagement), the music video still leaves me a bit confused. Mainly, I felt that the different parts of the video could have been pieced together more cohesively.

The balloon-and-streamer-decorated surroundings, as well as the champagne tower and cake suggest that the scene is that of a romantic event that was supposed to take place. There are two versions of the actress in that scene: a version that is bathed in a warm light, and another who is shot in darker tones who also seems a bit more angry and prone to breaking things. At times, there are flashbacks to the light version of her receiving the ring. Are they past and present versions of the same person? Are they different alter-egos of the same person, at the same point in time? Or are they even the same person at all? My best guess is that there are two sides of her portrayed in the present: one with sad but fond memories who relives the past, and another who harbors bitterness in her heart. At the end of the video, the only version of the woman who is able to wear the ring is the one contained in the memory of her past.

Admittedly, the actress featured in the music video (Cha Ye-ryun) didn’t really manage to grab hold of my emotions. However, the emotions of the song itself, as well as the brief shots of Haha and Taw more than compensated for her performance. Stylistically, I found that the MV does a good job with balancing out the melodrama of the music with the more muted and quiet anguish of the actress in the music video. There’s a bit of the throwing stuff around (no sound effects though!) and breaking things that is pretty much autonomous with Korean angst, but not too much of it, which I appreciated. 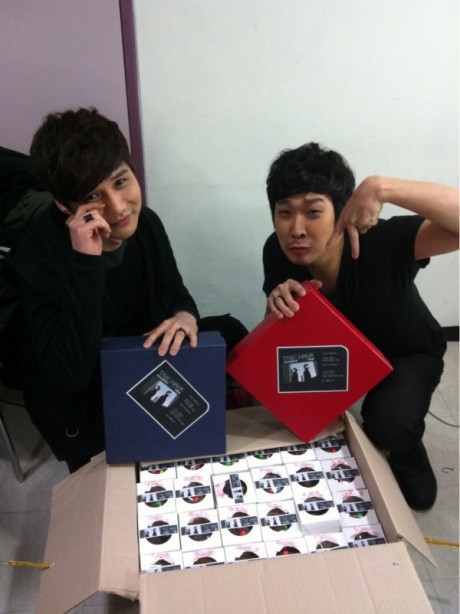 Put quite simply, the song is heart-wrenching, with or without an understanding of the lyrics. The emotional vocals of Ha Dong-kyun (a member of Wanted, who has also released solo albums) matches well with the emotional and husky voice of Haha, as well as the emotional and smooth rapping of Taw. What can I say? The song is pretty damn emotional. I could definitely see it being featured at the climax of a drama.

Part of me wonders whether Haha is using this song to tell us his own personal story and feelings. People who have followed him on variety know that he had an ex-girlfriend that hurt him really bad in the past, and that for a long while he had a hard time getting over her. However, in an interview with StarNews around the release time of their album, Haha divulged that marriage has been weighing heavily on his mind lately (his close friend such as Park Geun-shik got married recently), although he also claims not to be seeing anyone at the moment.

Honestly, the music video didn’t leave a particularly strong impression on me but the music itself did, and I also enjoyed their live performances, which feature ballerinas as well as a rotation of singers in lieu of Ha Dong-kyun. So far, the duo have performed the song with John Park, MBLAQ‘s G.O., B1A4‘s Sandeul, and K.Will.

As for the album, I found it to be a experimental mix of quite a few genres (R&B, reggae, jazz, funk), with some songs that were hits for me, and others that were misses. Songs that I think are worth a listen include “Break Time,” “Sweeping My Hair” (feat. Young Jee), “Laugh and Cry,” “Loss and Gain” (feat. Juvie Train), “Lightning” (feat. Burngae), and “Love” (feat. Gary and Kim Greem). Check out the live performance of “Love” on Yoo Hee-yeol’s Sketchbook below:

What are your thoughts on Haha and Taw’s comeback?