Take a Weekend Ride on Jung-in and Gary's "Bicycle" 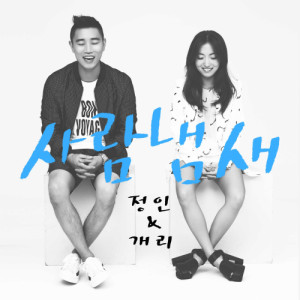 I’ve been a huge fan of Jung-in‘s voice ever since I heard her cover of “I Loved A Friend’s Friend” on Immortal Song — it was a confident performance of a beautiful lady entirely comfortable in her own skin, unafraid to wear her heart on her sleep, chock-full of girlish sass — all facilitated by an impressive set of pipes that showcased her expressivity and musicianship to the fullest degree. Gary‘s rap-writing ability, of course, needs no further introduction — his are the kind of lyrics that require one to move beyond relentless headbang moments and feel more deeply, if only for those few moments.

“Bicycle” is hardly the first time Jung-in and Gary have worked together — older fans may remember the collaboration she did with Leessang for her debut “Rush” and “The Woman Who Can’t Break Up, The Boy Who Can’t Leave,” the latter of which was all manner of heartstrings-tugging and quite understandably a hit.

More recently, Gary and Jung-in worked together on “Scent,” which was released in June of this year — a fresh-sounding track which centered upon how having the “scent of a human, an untainted and natural person in this complex world” affords one’s object of affection “a charm of unconventional beauty.” Gary’s lyrics make your heart smile, and Jung-in’s astounding vocal register and tonal flexibility are both maximised to create a lighthearted, breezy track with depth one would hardly expected in a summer track.

In case you can’t tell already, huge fan here. Of both of them. So this end-summer track was a pleasant pick-me-up on an exhausting Saturday afternoon.

Despite the casual, unpretentious directing of the video for “Bicycle,” there’s no doubt that its construction is quite deliberate and carefully considered. The beginning of the music video is conscientiously constructed — isolated imagery of little-seen images before the city comes to life, so to speak. The underbelly of a street lamp, the view of the causeway from a distance before the morning traffic streams in, the scattered reflection of a swathe of sunlight across a quiet gathering of water, an accumulation of fluffy clouds serving as a backdrop to a basketball backboard. It’s a beautiful re-enactment of space and place (largely) sans humanity and offers a thoughtful prelude to the lyrics of the song itself. 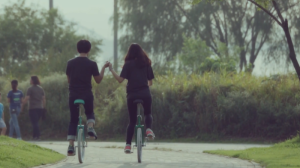 The lyrics speak of a fine day that hasn’t been for a substantial period of time, and the video follows individuals on a beautifully captured day in an assortment of individual pursuits, “get[ting] away from it all, the complicated city, the stacked-up work, people’s noisy words.”

We zoom in our variously touching groups of people who find in the slowness of the day — such wonderful lyrics by Gary — that “the river is calm, as if it stopped its pace, it’s like our hearts.” A father teaching his daughter how to ride a bike for the first time, couples being delightfully focused on just one another and extremely adorable, a group of friends playing a casual game of basketball.

The formerly quiet places filmed in the beginning of the MV now come to life, filled with vibrancy and youth and human affection generously doled out. This is not “the complicated city” dominated by unhappiness and the pressures we give to each other, but one filled in with much happiness and colour by the joy that is being taken in life by all. As Jung-in sings “I can’t stop smiling, I can’t stop smiling,” there is such joy for life here!

There is a decided dearth of modern technology here as well — at one point in time a selfie stick is implied (when the basketball friends take a group shot), and daddy’s little girl has one of those awesome bubble-making machines, but that more or less rounds it up. This does appear to be a subtle but effective directorial choice — the emphasis here is clearly on simplistic pleasures that bring to focus the building up of human relationships and affections. 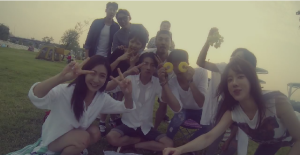 Though simple, the video itself is a thoughtful construction, and goes together so well with the lyrics. Kudos to the artistic team for finding a day so beautiful and creating something so simple and lovely out of it!

Here it also seems appropriate to credit Gary for the poetry, really, that he’s writing — “so many people on the river bank with busy hands and lips / the sun closes its eyes at their secretive whispers.” And here of course in the video the day is fine but not overly bright out, even as the smiling faces suffuse joy that shine so much more brilliantly than anything else. There’s something so warming about all these uninhibited smiles, so unabashedly enjoying the now, that you want to sing with Jung-in: “Don’t stop, this moment / I feel so good.”

As “Bicycle” so gracefully reminds us — it really is all about the small things. 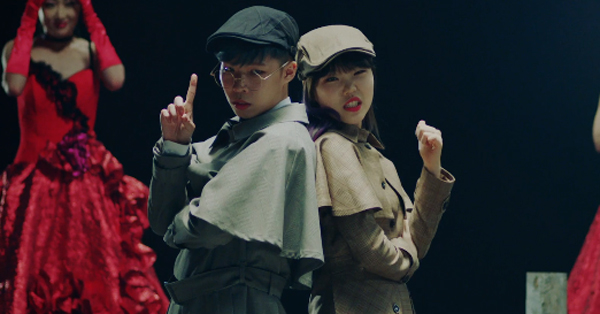