The T-ara Diaries: Backpacking Around Europe

Ah, backpacking: surely the calling of over-enthusiastic ramblers or penniless gap year students. Not the kind of thing a 10 billion won-insured girl group would decide to do. That as it may, T-ara, as well as the seven-member labelmate rookie girl group which includes supermodel Kim Hyeji, are right now beginning their epic tour of Europe, with an itinerary that includes Milan and Venice  in Italy, Jungfrau in Switzerland and Innsbruck in Austria. Traveling with them are acclaimed music video director Cha Eun Taek and fashion photographer Jo Sae Hyun.

CCM has decided to focus on the sheer joy of travelling in a foreign country, and want to the girls to be about to really show their true colours. That’s why the trip is to b

e a “penniless” tour – the 10 million I mentioned a moment ago? That’s insurance, in case they fall in a canal or get bitten by a zombie or get all their camera equipment stolen by actual penniless backpackers. I’m taking this statement with a pinch of salt; the trip is still costing 1 billion won which seems like quite a lot to me. However if you take into account the travel expenses, food, tents (they better not be staying in hotels) and the like it probably adds up.  Personally, I would like to see the girls given a certain amount of money each and told to live on that. After all, not relying on the company for hand-outs does give them the freedom the girls admit to craving. Plus, watching anyone struggle with a whole new currency is fun, so I’m sure they’ll get some inflation-related jokes in there somewhere.

Having done a fair bit of hiking myself I couldn’t help feeling rather skeptical when T-ara turned up at the airport in sky high heels, designer 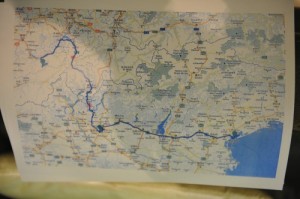 purses and skinny jeans. While I know they are hardly going to appear in the airport in walking books, windcheaters and waterproof trousers, they do look terribly unprepared for this. Yes, they may be incredibly fit from performing and dancing as well as having a lot of stamina, but walking and dancing aren’t the same, physically or mentally. I hope they have done some preparation. Nine days may not seem like much, but once the blisters set in and it rains and nothing dries properly it’s a different story. Oh, T-ara, I shall enjoy this.

And I can enjoy it from the comfort of my computer chair. CCM, ever seizing the initiative, are not just sending the girls off into the wilderness with nothing but a shaky Twitter feed, but they will also be filming a MV, a photoshoot and teasers for the new 7-member girl group while T-ara themselves document their travels via pictures, video updates, and Twitter. It also gives Hyomin and Eunjung a chance to provide creative direction for first two production notes, and so we are always aware of what they are up to. The first selcas have already appeared, one featuring some sexy Italian waiter.

e new 7 member girl group as well as the potential band shake-up with T-ara, it’s almost an act of mercy to get the girls out of Korea for a while. Although trekking in Europe probably wasn’t what they were hoping for. It will be a unique way to introduce the new girls, and it will be refreshing to see them, warts and all. CCM can script this trip until they are blue in the face, but it’s a lot harder to remember you are meant to like everyone and everything when your manger is not there to guide you, your feet hurt and there is a handy camera to vent your feelings at.

I suppose that as non-idols, we can’t really understand the freedom this trip will bring the girls. From the start that seems to have been their main attraction to the project; they have even named the trip “FREEDOM”. And while I have no particular love for the girls themselves, I do want to see them relax and take in the sights like proper tourists. They have chosen some beautiful places to visit; they could probably still catch the snow in Innsbruck and Jungfrau if they fancy a little skiing. I don’t know how many or how relentless the fans are in these places — I imagine there might be a fair few in Milan, but certainly less than they are used to, so T-ara will get a break from that. At the same time they can meet a few fans in places they would never hold concerts, and try and spread the Hallyu wave further. It’s about time somewhere that wasn’t Paris got the Euro/K-pop love, although why not the UK? We have some lovely hiking spots. I’ll take you myself.

I can’t wait to see this all pan out. If it goes well maybe other idols will attempt it. I rather like the idea of JYJ getting lost in Scotland or KARA island-hopping in the Aegean Sea. Most of all though, I hope the girls have fun – although for your own sakes, please ditch the heels.