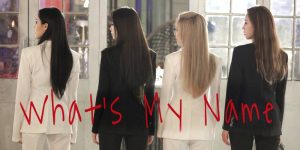 T-ara has dropped lead single “What’s My Name” without members Soyeon and Boram, in what seems like their most half-assed venture to date. At this point I know I’m not the only disappointed fan around; who else is done with MBK Entertainment’s nonsense?

Putting aside the latest management-versus-artist drama surrounding member contracts, the release didn’t exactly have an auspicious start: teaser photos for “What’s My Name” involved a font that may or may not have been written with someone’s index finger for Snapchat.

And now with the release of the full MV, it’s clear that the company couldn’t be bothered to devote any time, effort or money to a girl group on the wane. Qri, Eunjung, Hyomin and Jiyeon are lovely in their summery dresses, but it’s about all we get as they wander aimlessly around faux-Baroque architecture, and through a garden at sunset. For some reason there’s a trolley as well as a classroom, and an ex-boyfriend that appears exactly twice? Forget plot, forget logic – as long as the girls look good, it’s all good!

This scattershot basic-ness comes as a disappointment when I remember the consistency of T-ara’s heyday, when they used to release fun concepts and epic short films. “Roly-Poly” involved the girls at a disco, eyeing a cute guy and mastering new dance moves; “Lovey Dovey” followed a zombie virus spreading through a club. Even after the questionable brouhaha involving the addition of semi-member Dani, we still received the dystopic feud spanning “Day by Day” and “Sexy Love.” 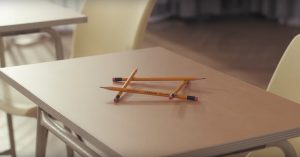 But “What’s My Name” is a notch below even the simplicity of “TIAMO,” which at least had a coherent Christmas theme. This latest MV can’t decide what it wants to focus on with the remaining four members. Are they sad because of a past lover, or because of their former groupmates? The imagery of two upturned desks, six pencils, and two glass bottles are a nice tribute to Soyeon and Boram that genuinely moved fans; couldn’t such symbolism have been made overtly the central theme of “What’s My Name?”

The song itself is serviceable, with light synths and a snappy beat, making it an easy addition to any summer playlist. Yet it lacks the strong hook needed to become an earworm, and the girls’ voices sound strained and hollow – particularly without Soyeon, the group’s main vocalist. I’ve kept the song on loop for now, though it pales in comparison to other T-ara bops. 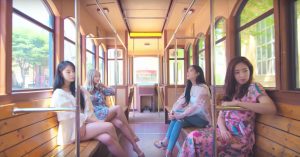 Especially given the rumors flying that this is T-ara’s final release, and they will soon be disbanding, it’s disheartening to see the group return with such a sloppy comeback. No fan wants to see an artist they stan walk off the stage feebly; they want to see them dominate the charts one last time. But perhaps too many incidents have marred the group’s image since they managed to eclipse SNSD with the “Roly-Poly” back in 2011. Insofar as T-ARA are no longer superstars, it seems MBK would rather focus on the promotions of younger group DIA, than give a senior artist the respect they deserve. It’s a bitter story we’ve become all too familiar with as the K-pop queens of yesteryear recede into a nostalgic memory.