Let me begin by saying this: I’ve never been a T-ARA fan. Not that I dislike them, I’ve just never been interested in them. Then, however, I saw T-ARA’s teaser for their upcoming music video, “Day By Day,” last week, and I immediately fell in love. The teaser was glorious — beautifully shot and displaying an interesting, angst-filled storyline about an apocalyptic world. It strongly reminded me of a video game, and still does. I questioned the amount of Dani that I saw but other than that I loved the teaser and anxiously anticipated the music video.

The music video, however, left me feeling more dissatisfied.

[youtube http://www.youtube.com/watch?v=brnCe8lL7l4]The music video opens with the worlds “Mankind wanted to wear God’s clothes. They wanted to talk like God and reign like God. But God did not approve of these thoughts. In a ravaged world, mankind has become more animalistic than animals… They took up swords, and as soon as they ruled over each other, the massacre began. Then one day… Rumors started to spread about a girl who had special abilities…” revealing the plot of the MV. 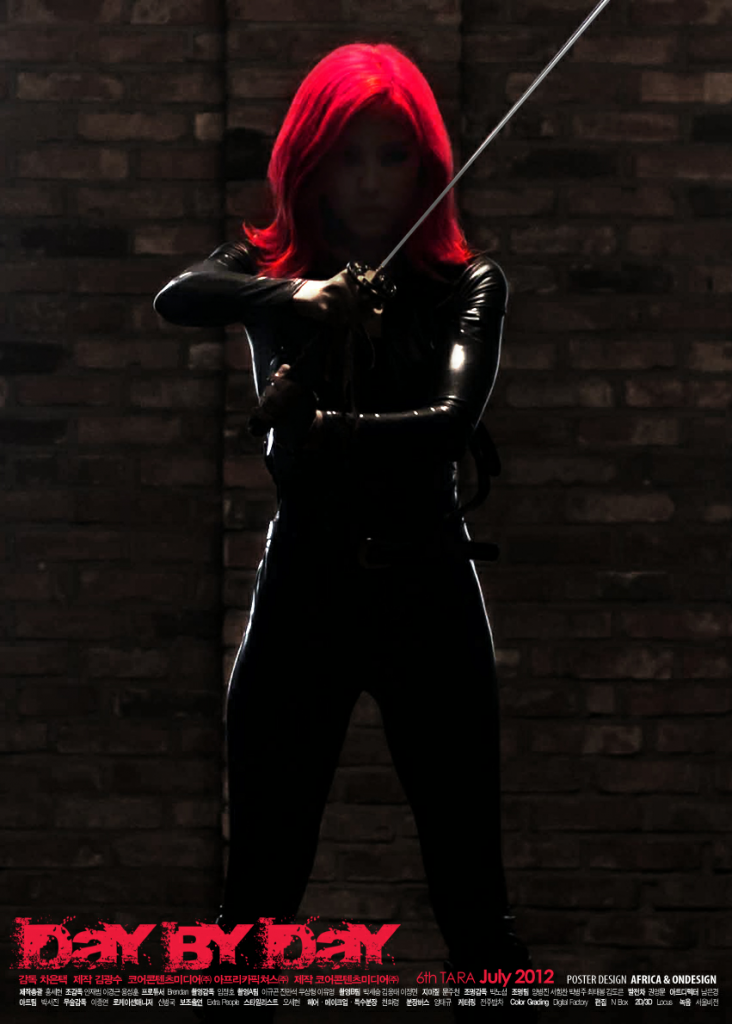 The story takes place in an apocalyptic world where violence reigns, and in this world exists a young girl with special powers, played by Dani. Dani’s character is protected by Hyomin, a sword-swinging, motorcycle-riding badass. I couldn’t tell you the nature of their relationship — maybe they’re close friends, maybe they’re sisters, maybe they’re something more. This entirely MV is ripe with lesbianic implications, but due to Dani’s very young age, I’m going to say their relationship is sisterly. Hyomin and Dani roam the outskirts of Neo-Seoul while gang members, lead by Jiyeon, slash up people and search for Dani. Eventually they find Dani and Hyomin, and in the most fake fight scene ever — Hyomin, that is not how you swing a sword — Hyomin falls and Dani is taken away and put into a cage, then later hooked up to a machine. Hyomin is saved by a mysterious man and falls into a coma for six years.

The storyline of the MV is certainly interesting and easy to follow. Clearly Hyomin is going to try to save Dani in the next installment, though I’m not entirely sure where Eunjung’s character fits in yet. Perhaps she’s a ninja assassin? A vigilante? Jiyeon’s subordinate? The future Dani? We’ll have to wait to find out. The acting in this MV isn’t the best — it took me awhile to figure out Dani was blind and the fight scenes were cheesy and poorly choreographed and filmed. Jiyeon does her strutting thing well, though her role seems to require the least amount of acting.

There are a few more downsides to this music video. The actual song “Day By Day” doesn’t seem to fit the MV completely. The mood of the song does, but not the meaning. “Day By Day” is a sad love song about a girl pleading with her lover to stay with her, which doesn’t have anything to do with the storyline.  Aside from the main song used, the ending was terrible. Whose idea was it to include five minutes of behind-the-scenes footage? There could’ve been a separate video for that! It was a complete waste of time. 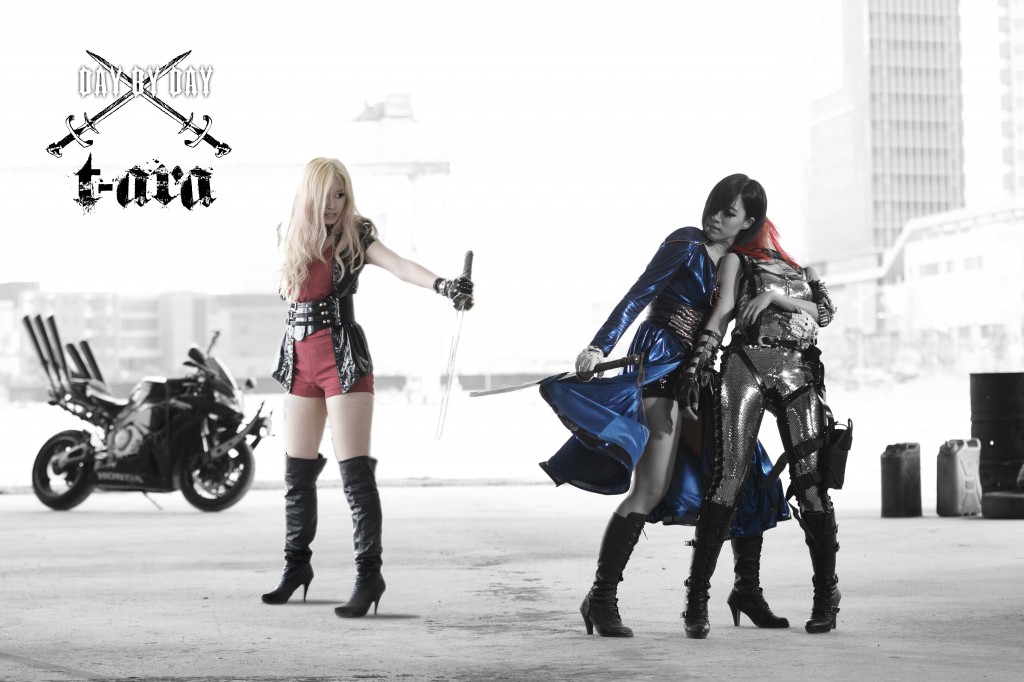 Now for the upsides. I completely love the concept, cinematography, and styling of this MV. The idea isn’t new but it’s a fun concept to work with and a pleasant change from the usual angst-type concepts we see in K-pop. My inner geek adores how similar it looks to Final Fantasy VII. With the exception of the fight scenes, which were clumsily done to say the least, the cinematography was stunning. The landscape looked very realistic and I loved how Hyomin’s vivid red hair stood out against the muted background.

The hair and makeup was perfect — Jiyeon and Hyomin looked amazing with their new hair colors and Dani looked perfectly pretty. The girls looked hot in their nearly all-black outfits and I especially loved Jiyeon’s black leather outfits and clunky jewelry. I don’t really care for Eunjung’s outfit, which looks very Matrix-y and causes her to look a little thicker around the middle, while Hyomin’s upcoming outfit in the next MV looks like an exact replica of one of SNSD’s old stage outfits.

In spite of its weak points, I still love this MV and the song. However, I feel as if it would’ve worked better as a full-length movie. The story could’ve been better developed and not so rushed, and the characters would have time to grow. The plot would fit better into a motion picture than an oddly-overly-long music video. T-ARA’s  album could have been the soundtrack. And then they’d be the first in K-pop to do a movie instead of a music video, but alas, CCM is cheap and instead chose to shove it all in an MV. Buggers.