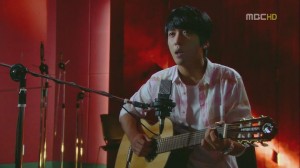 Quick, quick, you’re a K-pop singer and there’s a performance for the night! The brief calls for singing a song out of the usual repertoire, that shows off your vocal talent, and which the audience knows, having heard it on the radio before. What better way to answer than with a cover of an English song, or a past hit?

As much as covers do all of the above nicely, and have become an institution of stage programs and year end programs, there are times when a particular song gets chosen so often it starts to get clichéd, or when an idol worryingly fails to pull it off.

So with that, it’s worth taking a look at some of the more commonly (or possibly over) covered songs in the K-pop sphere.

One song that almost everyone is covering these days is Adele’s “Rolling in The Deep.” With its rousing chorus and heartfelt lyrics, this was definitely one of those songs that called for a fair amount of talent to pull off, and this rendition definitely got the ball rolling.

The ensuing goodwill reached the point where her rival also covered the song in the show’s final, and like buses after waiting, another cover appeared again, this time by SNSD’s Tiffany for an episode of Yoo Hee Yeol’s Sketchbook.

Hearing three renditions in six months always creates the opportunity for comparison, but in this case, it was three different approaches to the same song, and that picking the best one is probably down to personal preferences.

The “Rolling in The Deep” love has also expanded beyond the stage and onto drama. In the drama Fashion King, there is a scene where a character drives around in anger blasting the song on the car stereo. Despite the obvious promoting of the car’s hi-fi system, and how obvious the music choice was, there had to be something said about playing a song about a break-up to illustrate a break up.

Another British singer getting a popularity shot in Korea is Pixie Lott, when this duo covered this chipper hit about being in a forbidden relationship and sneaking out to meet the guy as part of a reality show audition.

And then later when SNSD-TTS did this as part of a special acoustic performance, though the performance was pretty inspired by the former, judging from the audience reaction near the end.

And then there was another solo performance here, this time of a different song.

Contrary to the Adele covers, which I found clichéd after a while, the Pixie Lott covers are a bit more enjoyable. The songs are easier to pull off in terms of vocal range, with an added hint of fun to them. I would probably be enjoying them for a while, or at least until someone utterly kills the songs, or everybody starts doing them to the point it gets really uncool.

In the guys’ corner one pretty common choice is “Falling Slowly,” originally by Glen Hansard and Markéta Irglová. Now this is one song that has completely taken on a life of its own, with the covers being far more known than the original. Although many varied versions have been done by artistes as varied as Jung Sungha to Super Junior’s Sungmin, and even the ballad king Shin Seung Hoon, the undoubted “King of Falling Slowly” has got to be CNBlue’s Jung Yonghwa.

Whatever the occasion from a radio broadcast, live stage to any variety show where he’s allowed his guitar, Yonghwa in many ways can be counted on to perform this song. Below is how he uses the song on almost any show that calls for his guitar..

Not far behind the cover stakes is his bandmate Jonghyun, who prefers the smooth and radio friendly sounds of Maroon 5. Here is a cover of their hit “Sunday Morning,” for the stage program M! Soundplex.

Aside from the above cover, Jonghyun also enjoys picking from Jason Mraz’s repertoire, with covers of “I’m Yours” and “Lucky” performed quite regularly on radio broadcasts. Other artistes who also show some Mraz love in terms of cover choice would also include SHINee and Super Junior’s Eunhyuk.

And while we’re at it, it’s also worth mentioning Bruno Mars’ “Just The Way You Are,” which has been covered by a wide range of artistes from SM Family at SM Town to guitarist Jung Sungha.

Another thing commonly seen in K-pop is artistes covering the famed song of a senior. The top choice seemingly is Shinhwa’s “T.O.P” (Twinkling of Paradise), covered by SNSD not once, but twice. The latest rendition apparently comes from Boyfriend, who performed it at the latest Dream Concert.

And for girl power, what better way to express it than with the original female pop group, the Spice Girls and their hit, “Wannabe”?

So from the above examples, it seems that almost every Korean singer just ends up choosing from the same repertoire regarding covers. While they can pull off the songs in their own way, one cannot help but wonder if they are missing out on an opportunity to do something truly unique. By picking a song outside the usual choices, they might be able to say something about their musical tastes, as well as truly surprise the audiences.

There could also be the argument with everybody covering the same song, it tends to get boring and clichéd after a while, and eventually audiences stop enjoying the song for what it’s worth, and begin to incessantly judge every cover.

Also, almost everybody covering either an English Top 40 hit or a pop song from way back, a good question that could be asked is, where does that leave Korean music? Sadly, it seems that K-pop artistes tend to often overlook Korean language, especially indie, songs when doing covers.

This is rather unfortunate, as it does not help change people’s perceptions that K-pop does not share its success with other aspects of Korean music’s. This is because by picking something slightly more obscure, a well-done cover could instantly propel the song to fame.

And on the other extreme, is probably Insooni’s “Goose’s Dream.” Sure the song might be enjoyable, and used in the right context, pretty inspiring. However, when it has been used in almost every context, from SM Town, to singing competitions, then it starts reaching the point where it is no longer about the song, and more about a performance to impress.

To sum up, while I do enjoy covers as they serve as nice break from the usual performances and serve to highlight the other abilities of the artistes, it’s also debatable whether the covers fall into a cliched pattern after a while, as well as whether only popular songs are chosen because of how relatable they are, rather than because they help audiences view songs in another light.

So Seoulmates, do you have covers you find that everyone keeps performing? Are you okay with it, or wished that more thought was put into song selection?