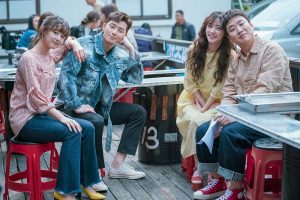 Following a spate of two-episode dramas in light of the South Korean elections, Fight My Way finally made its premiere on KBS on the 22nd of May, with a modest debut rating of 5.4%. The 16-episode drama has since, however, seen a steady ascent in its viewership over the last eight episodes. Peaking at 11.4% on its sixth episode, it has edged out its competitors, My Sassy Girl and Lookout, on the other two major broadcasting networks. Truth be told, the casting of Park Seo-joon and Kim Ji-won as the leads already generated a good amount of interest in and of itself. But actually seeing the remarkable chemistry on-screen only makes it all the better; and don’t we all love it when dramas meet — and even exceed! — our expectations?

This review contains some spoilers for Episodes 1-8. We kindly ask that readers use spoiler tags in the comments when discussing the episodes that have yet to be reviewed.

The drama revolves around the lives of four childhood friends — Ko Dong-man, Choi Ae-ra, Kim Joo-man (Ahn Jae-hong), and Baek Sul-hee (Song Ha-yoon) — and the pursuit of their dreams. Dong-man, once a regional taekwondo athlete, now works as a pest exterminator while Ae-ra, with multiple failed attempts at becoming a broadcaster under her belt, mans the information desk in a shopping mall. Joo-man and Sul-hee, who have been dating for the past six years, both work at a food manufacturing company where Joo-man is an assistant manager and Sul-hee works in the home-shopping department, tending to customers on the phone all day long.

All four lead ostensibly ordinary, average lives. But bubbling just beneath the surface is a burning desire to be lead their lives to the fullest (whatever ‘fullest’ may mean to each of them) — to become a fighter for Dong-man, a news anchor for Ae-ra, and for Joo-man and Sul-hee, to simply have the resources and freedom to get married and live together happily. As with every man on the street, however, it is always easier said than done; all four face numerous obstacles that prevent them from fulfilling their dreams. 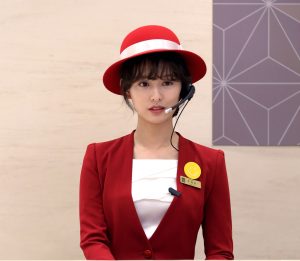 This plotline is not new to the world of K-drama, but what really makes this premise work, however, is the very nature of these obstacles — small, mundane, and sometimes even petty. Of course, being a drama, the problems are sometimes dramatized — such as Dong-man’s bribery scandal, for example. Nevertheless, the underlying principles of these problems are universal. How many of us, like Ae-ra, have continuously shied away from pursuing our dreams because of the fear of failure? How many of us, like Joo-man, have constantly stuck it out at work, only to progress up the corporate ladder at snail’s pace? These life problems are real and relatable, thus endearing us to the characters.

At the same time, this realism is also manifested in the details of everyday life. Ae-ra, although in the very attractive form of Kim Ji-won, has the Irritable Bowel Syndrome (IBS), and embarrassingly farts multiple times in the presence of her then-unrevealed-to-be-a-cad suitor, Park Moo-bin (Choi Woo-shik). Prolonged farts, one might add. When Sul-hee and Joo-man’s relationship enters rocky waters due to a third party, Jang Ye-jin (Pyo Ye-jin), she isn’t the usual catty, evil, and easy-to-hate boyfriend thief. She’s clueless, naive, and sweet. All these little problems of everyday life add up, and together, they form a mural of very real human-ness, and reaches into the hearts of the audience.

On the same weighing scale, however, the drama also serves up a healthy dose of dramaland to counter its realism. Romantic rooftop housing with a killer view? Check. Childhood friends that magically end up being able to keep in touch and even live as neighbours? Check. An unemployed stint that somehow doesn’t result in you ending up on the streets? Check. But of course, again, this is a drama after all — not a documentary. So really, Fight My Way does a pretty good job at this real-reel balancing act. 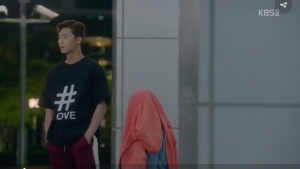 Finally, the icing on the cake is the way in which humour is weaved into the production. Right from the get-go, it was clear from the teasers that this was going to be a rom-com of sorts. But what this drama really gets right is the exact moment that the scene goes from romantic to comedic. In the very first episode, when Dong-man came to know that Kim Moo-gi (Kwak Dong-yeon), Ae-ra’s then-boyfriend, had been cheating on her, we watched Ae-ra break down in tears. Just before the scene bloomed into a full-on melodrama, however, it took a comedic turn and we saw Dong-man, Moo-gi, and Moo-gi’s new girlfriend (cameo by Jung Soo-young) engage in a ridiculous three-way collar-grabbing session in the middle of the road. It was completely absurd.

Similarly, in the previous episode, when Ae-ra learnt of Moo-bin’s two-timing ways, we saw Ae-ra struggle not to cry yet again. We’ve seen Dong-man comfort a crying Ae-ra multiple times over the past few episodes, using his jacket to shield her from the prying eyes of others as she cries her heart out. But this time, Dong-man completely exceeded our expectations with his game, removing his jumper and dumping it unceremoniously over Ae-ra’s head to cover her crying face. Few dramas can make its audience cry and laugh simultaneously.

And of course, it would be inexcusable to not credit the actors’ prowess at carrying their characters. Fight My Way might have a solid production and script-writing crew, but no drama hits ratings like these without stellar acting from its cast. Park Seo-joon and Kim Ji-won did seem like an unlikely pair, but their chemistry, and camaraderie alike, is impressive. Meanwhile, Ahn Jae-hong and Song Ha-yoon manage the act of a lovey-dovey couple without being overly cloying or sappy, with the latter further impressing with her ability to pull off Sul-hee’s character as giving without being a complete door-mat. 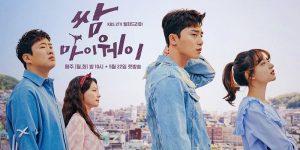 All in all as we hit the mid-way mark of the drama, there is time left, still, for our fantastic four to fumble their way up, especially now that all the cards are the table: Ae-ra’s (sort of) confessed to Dong-man, and Joo-man and Sul-hee’s jig is up, now that Ye-jin has finally realized that they are dating. here’s hoping that Fight My Way continues on its upward trajectory as we roll on into the second half.